Or is that wither Skywatch? I know it’s been a few months since my little newsletter, Skywatch, has made an appearance, and some of y’all are wondering what’s happened to it. Answer? Nothing—in every sense of the word. 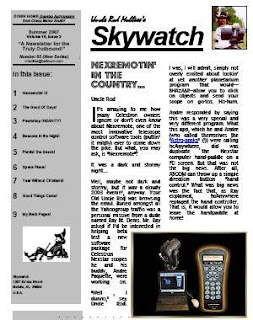 I’ve kept my Possum Swamp Gazette of an astronomy newsletter-cum-magazine (it’s a bit more than a newsletter and a we bit less than a full-fledged magazine) going since, well, hard as it is to believe, 1995, and heretofore I’d only missed one issue (after Katrina). Now, with Winter coming in, Fall 2007 has yet to make an appearance. Why?

Reason One is been too busy. In addition to the other things I do, including holding down a 40 hour a week (or occasionally more) job as an AEGIS engineer, I’ve been hard at work on a new SCT book to replace the (badly) out of date Choosing and Using a Schmidt Cassegrain Telescope. Oh, and I continue teaching my astronomy labs for two semesters a year.

I’d be lying if I told you that “just too busy” was the main reason, though. Frankly, this blog allows me to say pretty much whatever silliness I have to say with a lot less trouble than putting together a 20 page newsletter, even one that’s only distributed as a .pdf. Funny thing about blogs? In some sense they seem to be making a lot of things less needed and relevant including “regular” websites and pages. Frankly, lately most of the articles appearing under my byline have been retreads from this very blog.

I also note that I haven't received a lot of contributions from y'all lately. The reason for that may be that I haven't had the time nor the inclination to beat the bushes for 'em. That being the case, much of the remaining material in SW—the stuff that didn't come off this here blog—has been reprints of articles from the 1990s (or even the 1980s; Skywatch was around way back when as our Xeroxed club newsletter).

Does all this add up to “buh-bye Skywatch”? Maybe not. If for no other reasons than sentimental ones, I intend to keep it running at least on an irregular basis. Y’all might even see the Winter issue shortly after Christmas. There’s another and bigger reason, though: it gives talented amateur astronomy writers at least an humble place to get their early work seen. As you may be aware, several of the younger group of authors, including Tom Trusock, got their start, yep, right in the pages of good ol’ SW.

I won’t promise an ever-other-month or even quarterly schedule, but when the mood strikes me and when I have enough submissions to make it worthwhile to put out anudder number I will do so. Not good enough? If you miss Skywatch, how can you encourage me to keep it going on a more regular basis? Easy: just let me know by postin’ a comment here AND, most importantly, by SENDING ME YOUR STUFF…articles on any aspect of amateur astronomy, that is (including art, comics, poems, fiction, observing reports, reviews, construction projects, star party sagas, you-name-it).

Poor, old SkyWatch. I really haven't thought much about it in a long, long time. And why should I? The last issue, number 88, was published almost a dozen years ago. I stopped for the reasons noted above:  it was a lot of work, and this blog provided a far less time consuming outlet for my (non-commercial) astronomy writing.

SkyWatch had a good, long run, though, and was what made me into a professional writer. Beginning with my contributions to it in the early 90s when it was "just" a club newsletter edited by David Switzer, the then president of my astronomy club, SkyWatch taught me my craft. I took over SkyWatch in 1995, soon moved it from being a club newsletter to being a proto-ezine, and kept it going--amazingly to me now--for almost 13 years.

Should you have a yen for a stroll down memory lane, almost all the issues are still available here: https://skywatch.brainiac.com/newsletter/skywatch.htm

Comments:
Hi Rod,
Please continue publishing your SW newsletter. I very much enjoy reading this publication. There seems to be a 'comfort' feeling to it somehow. I understand the difficulty in continuing a regular schedule of publication, therefore it does not concern me that there may be fewer issues per year, as long as the SW continues to 'get out there'. Thank you for giving your time and effort in all the publications to date. It is a wonderful service that you have provided to fellow amateurs and I applaud you for it.
Regards,
Walt Dutchak

I agree whole-heartedly with Walt. Doesn't matter how many other astro publications I have a round the house, clickin' on a copy of SW is like checkin' in on old friends and seein' what they've been up to. Keep up the good work.

Rest assured, Skywatch will press on. As I said, a lot depends on how many submission I get...a lot means fairly regular issues...a little means..."when I've a mind."