The End of the Road? 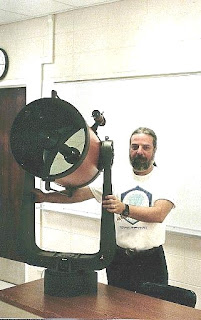 For the Schmidt Cassegrain? After all, this venerable telescope design has been around basically unchanged since 1965 or thereabouts. The short answer is “yes” and “no.” Certainly, there is still and will continue to be a market for inexpensively priced SCTs in the classic all-spherical design used by Celestron and Meade (Celestron does do some minor aspherizing to its secondaries—MINOR). These telescopes are easy to make in a mass production setting, and produce good results for most amateurs. Yes, stars do tend to gain weight and lose shape as they reach the field edge, but this has until now been a minor annoyance, and folks bothered by it have found a combination of high quality eyepieces and the ubiquitous f/6.3 Reducer/Corrector does a good job of fixing the SCT’s field edge faux pas.

That said, there’s a growing number of amateurs who want Schmidt Cassegrains, but who want better Schmidt Cassegrains. Some of these folks are driven by the fact that CCD chips are getting bigger and bigger. When SBIG introduced its amateur-oriented big-chipper, the STL11000, I wasn’t concerned. Who would want (or need) to use such a big chip with an SCT? But people do want to use this camera with SCTs, it seems, and these people are producing great images with the STL11000 on their SCTs, but there’s no denying that the big chip makes the “field edge problem” more serious.

Frankly, though, only a relatively few amateurs are going to equip themselves with the 11000 (or comparable cameras). The entry level price of almost 9000 dollars sees to that. B-U-T…lots and lots of amateurs are beginning to use digital SLRs like the inexpensive (sorta) Canon Rebel with their SCTs, and the CMOS chips these cameras are equipped with are, you guessed it, BIG.

Add to these two groups a younger generation of amateurs who’ve cut their teeth on small apochromatic refractors and who, though they want to move to the larger apertures offered by SCTs, simply demand “more-better-gooder.”

What’s the answer? Initially, I thought it would be a new design generation of Reducer/Correctors. Many of us shot pleasing 35mm deep sky images with the R/Cs. Not perfect, maybe, but good. And the f/6.3 R/C does do a good job on the C8. Unfortunately, though, it doesn’t do as well on larger SCTs, and vignetting is an annoyance even on an 8-inch (and becomes more of a problem with sensitive CCD chips). I thought it would be natural, then, for somebody to come out with a better R/C, maybe a larger aperture one that would use the larger rear ports on the larger than 9.25-inch SCTs, and that everything would again be rosy in spherical SCT land. That doesn’t seem to be happening. Other than the Meade/Celestron 6.3, there ain’t much out there—nothing at all, really, that’s designed specifically for SCTs or that improves dramatically on the “standard” f/6.3 R/C.

Then, all of a sudden, everything changed. It appeared an improved R/C would be a moot point. Meade, you see, had introduced an improved SCT design. This momentous occasion was, unfortunately, overshadowed by the company’s decision to call this (aplantic) SCT design a “Ritchey – Chrétien” (for marketing reasons, I guess), and by the criticism and lawsuits that followed from this decision.

Look, it’s pretty clear what Meade’s new design (used in the RCX400 and in the LX200 replacement, the LX200R) is, it’s an SCT. The scopes use a CORRECTOR PLATE (somewhat but not a lot different from a normal corrector, I assume) and a SPHERICAL PRIMARY (the same as in their other SCTs). The major difference is in the secondary, which is not a sphere in this design but (I’m told) a slightly overcorrected parabola. It has nothing in common with a “real” R/C as far I can tell other than that both telescopes are descendants of the original Cassegrain design.

Be that as it may, the new Meade telescopes offer a very real improvement over all-spherical SCTs. NO, this improvement is not dramatic visually, though you can tell that stars look “smaller;” especially at the field edge, but it’s real, and does make a difference when you’re imaging with large chips.

So the spherical SCT is doomed? Maybe. Probably not. In addition to the fact that spherical SCTs will likely always be cheaper to make and sell, Meade appears to have bungled the introduction of the RCX. Not just in their (in my opinion) very unwise decision to refer to it as an “Advanced Ritchey-Chrétien” design, but in their QA failings. Far too many of the scopes seem to arrive DOA, and are shortly on their way back to Irvine, California. These problems rarely involve the optics, but they do tend to create the perception that the RCX is a lemon (the R, in contrast, on its LX200 mount, appears to have had a relatively problem-free introduction). I’m afraid this may, at the very least, discourage Celestron from introducing an improved SCT design of their own. At worst, Meade may decide to throw in the towel on the RCX if not the R.

And that would be a shame. Because the Meade telescopes really do take us to the next level SCT-wise. It is time for a change in my judgment, and the RCX and the R do show that the SCT can be done better.
# posted by Rod Mollise @ 10:41 AM 3 comments 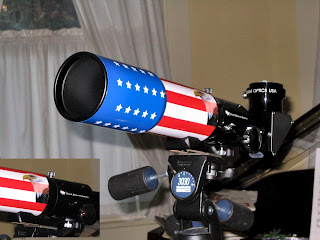 Yeah, I said BE-YOU-TI-FUL (click the pic for a full-size image)! Now, admittedly, your Old Uncle is a vet, and basically a patriotic kinda guy, but I think a lot of people are gonna like this little apochromat for its smashing good looks. Think fireworks, think cool 60s pop art, think The Fourth of July and Yankee Doodle Dandy!

What this little charmer is is the William Optics 66SD APO Patriot Edition, the “Patriot 66.” Looks ain’t everything, of course, and you'll soon get a full report from me on just how the little thing does on the sky. Watch this space for information on my full review, coming soon.

Until then, I’ll just say the scope (I’ve been using a WO 66SD with an, err, more “subdued” paintjob for some time) has taken the place of some larger grab ‘n goes at Chaos Manor South for our casual observing. After experiencing this one’s flat, wide field, it’s hard to go back to using the StarBlast.

Let me caution you: if you think you want the Patriot 66, get one NOW. This is a VERY limited edition. Go here for complete details: http://www.williamoptics.com/ If you hurry up, you may even be in time to get one with your state’s name engraved on the focuser! Sure, there’ll still be the normal 66SDs (just as good optically and available in various—if not as exciting—colors), but The Patriot may be a once in a lifetime scope.

Further, the good folks at William Optics, who’ve expressed a great deal of concern about the devastation wreaked on Uncle Rod’s part of the country by Hurricane Katrina, are donating a SUBSTANTIAL amount from each sale to the American Red Cross. Beautiful, unique scope. Great cause. How how the h-e-c-k can you go wrong? 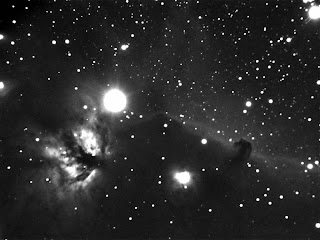 A lot, it turns out. See the entry below for a link to my full review of the William Optics Megrez 90, but here's a sample of what a "little" scope can do (M90, CG5, ST2000, 15 minute autoguided exposure). Click for a bigger version. This shot of the Horsehead area was taken under poor seeing conditions from the fairly light-polluted environs of Fairhope, Alabama.

The old "Uncle Rod's Corner" columns are long, long gone from AT&WB, but you can still eyeball 'em at: http://skywatch.brainiac.com/reviews/reviews.htm 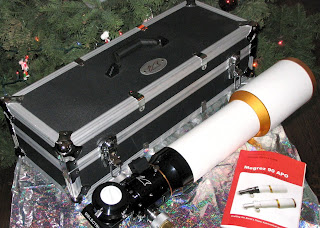 Yep, my review of this much-talked-about William Optics APO refractor is now up at my Uncle Rod's Corner column ("That's a Big Refractor, Paw-Paw!") thanks to the good folk at Anacortes Telescope and Wild Bird.

The old columns at Uncle Rod's Corner are long
gone, but you can still read the review of the 90 at my Rebel Reviews page:
http://skywatch.brainiac.com/reviews/reviews.htm
# posted by Rod Mollise @ 8:57 PM 0 comments 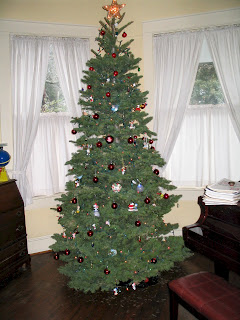 I resolve to spend more time looking through telescopes than talking about ‘em.

I resolve, therefore, to turn off that consarned boobtube and get out under the stars, even on "iffy" nights, even with "just" a StarBlast or a pair of 15x70s or my eyes.

I resolve that if there’s a Moon in the sky, I will give her the attention she so richly deserves.

I resolve to be more understanding when it comes to novice amateurs and my astronomy students. I will not use the words “you dunderhead” anywhere in my answers to their questions.

I resolve to spend more time enjoying the company of my friends at star parties rather than ignoring them in a quest for the ultimate visual observation (with my middle aged eyes who am I kidding, anyway?).

I resolve to do some good presentations for my club’s monthly meetings rather than complaining about the lack of ‘em.

I resolve to continue to support our great nation’s bourbon whiskey distillers.

I resolve to try my best to get the quarterly issues of Skywatch on the street at least at some point during the season for which they are dated.

I resolve not worry about taking down the above Christmas Tree in Chaos Manor South’s living room by Twelfth Night.

I resolve to wish each and everyone of you A HAPPY AND PROSPEROUS AND CLOUD-FREE NEW YEAR!
# posted by Rod Mollise @ 11:54 AM 0 comments