Lords of the Horse 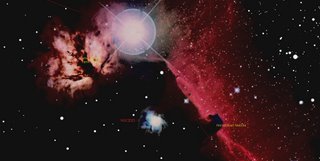 Happy Thanksgiving to my fellow American amateur astronomers! Miss Dorothy and I had a wonderful if non-traditional holiday at the beautiful Hotel Monteleone in New Orleans' French Quarter. Miss D. did have turkey, but it was coconut shrimp and margaritas at Jimmy Buffet’s place for me. Last weekend I did the marvelous (and final, it appears) Chiefland  Star Party at the Chiefland Astronomy Village in Florida, and I find myself with several stories to tell. Here’s one, Muchachos.

Hold onto your hats, boys and girls; you’re about to get an article on observing from your Old Uncle. Yeah, I know, I’m more known as an equipment guru when it comes to amateur astronomy punditry, but don’t y’all forget: I actually USE all those scopes and eyepieces, and not just for my fumbling attempts at astro-imaging.


Anyhoo, I recently made one of the more memorable observations of my amateur astronomy career. In some ways it was also one of the least interesting—as far as how the thing actually looked, anyway. I’d like to share the experience with y’all. Yeah, I’m talking about that nemesis of visual astronomers everywhere: B33/IC 434, that Notorious Nag, The Horsehead Nebula in Orion.

My history with The Horse? I don’t know whether it has been fear of an "impossible" object, or just the knowledge that if I did see it, it wouldn’t look like much, but in 40 plus years of observing runs, I’d never seriously devoted myself to tracking down this difficult but archetypal symbol of deep sky astronomy. Not visually, anyway. I've imaged it on numerous occasions--it's easy enough to photograph even from less than perfect skies. However, taking a picture of the Horsehead is just not the same as seeing it in real time in an eyepiece.

Oh, I'd looked for it in an informal and off-hand fashion a time or two, and once even thought I MIGHT have seen it in my 12-inch Dob, but I'd never been completely sure about it through my own scope, and I'd never devoted more than a few minutes to its pursuit. I had seen it a few times, mostly in very big dobs, but this amounted to quick looks. To be honest, "a few times" was probably more like "once or twice." Despite being offered looks at the Horsehead through somebody's scope at just about every fall/winter star party, I wasn’t always sure I’d REALLY seen the thing.

In large part, this uncertainty was due to me usually not being sure exactly where B33 was in the eyepiece (“kinda near the center of the field” didn’t help much). If you're not sure precisely where B33 is in the ocular, you'll have a real hard time seeing it unless it is VERY obvious indeed, and, believe me, it's usually far from conspicuous, even in 25 - 30-inch class instruments. Naturally, I’d tell the proud owner of the scope I was using, “Well, HAIL YEAH...there she is!” But, no, I was not often completely convinced I’d seen the dark intrusion into the bright (ahem) nebula IC434 that forms this pony.

Why did I finally decide to add B33 to my “observed” list? The idea of lassoing this wild stallion was largely a result of a pretty punk star party season down here on the Gulf Coast. My home-base event, the 2006 Deep South Regional Star Gaze, was mostly clouded out, and a cotton-picking AEGIS Destroyer that needed my attention kept me from going much of anywhere else. But there was still the famous Chiefland Star Party.


I’d be coming off a sea trial for the above-mentioned destroyer, U.S.S. KIDD, but I would have two days to spend on astronomy way down yonder in Florida. I figured I’d be pretty weary and wouldn’t want to mess with hardcore CCD imaging or even video astronomy with my Stellacam. Visual observing it would be. But what to look at? I always have a list at hand thanks to that wonderful planning program, SkyTools, but what would be the one special object I’d plan for and look forward to?

I had enough sense to know I should prepare myself to face this challenge. Aperture-wise, I thought the Nexstar 11 GPS would do, if just barely. What it lacks in light-gathering ability—as compared to a 25-inch dob, anyway—it more than makes up for with its dead on go-to accuracy. With a difficult object like B33, knowing you’re in precisely the correct spot is a huge help.

Despite that good go-to, I knew I needed to familiarize myself with the Horsehead's spot. I used TheSky 6 Professional (see the image above and click it for a larger version) to get my bearings, but any large-scale chart, computerized or print, will work. The excellent freeware program Cartes du Ciel can be an excellent tool for horse hunting.  Looking at B33's area, we see it is about 30’ south of Zeta Orionis, as everybody knows. You’ve got to pin things down more precisely than that, however, if you want to corral this nag.


Starting at Zeta, move about 20’ to the south. Here, you’ll encounter a line of three stars that will be your guide to the Horse Ranch. Easternmost is an 8th magnitude star, but not just a star. It’s surrounded by the reflection nebula NGC 2023, which is about 10’ in diameter, and which should be unmistakable on any “horse worthy” night. 10’ to the west of this round nebula is 8th magnitude SAO 132451, and 13’ farther west is yet another 8th mag sparkler, SAO 132438. Our target is positioned midway between these last two stars and 6’ south of them. A double star is just to the south of the horse's mane.

Having apprised myself of the exact position of my quarry, I equipped myself with an item I was sure would be vital in the quest, an hbeta filter. Yeah, yeah, I know you’ve resisted buying a “Horsehead filter.” They have been quite expensive and only work well on the Horsehead and the California Nebula and a few other dim nebulae, none of which you’re likely to be looking at night in and night out. What made me bite the bullet and finally buy an hbeta? One ain’t too expensive anymore. Orion will sell you a 1.25-inch model (all you need, really) for about 80 bucks.

Anything else? I might recommend a dark hood of some kind—maybe a square of rip-stop nylon you can drape over your head. Even at a dark site, you must take care to block all extraneous light. Even the light from illuminated handpaddle buttons can prevent you from seeing the Fickle Filly. No, I am not kidding about that:  that dim.

All set, I packed up the NS11 and the boatload of gear I haul around to star parties, and headed for Chiefland. I was anxious to begin my dark sky quest that first night, but I restrained myself. I bided my time. I knew Orion would need to be well away from the horizon if I were to have a prayer of having a success. While waiting for that, I brought up a medium-wide Digitized Sky Survey image of the area with SkyTools 2 and gave myself one last familiarization tour of the Horse's hangout. That done, I covered the laptop’s red screen with a piece of black cloth. I knew its dim red light, like that of the telescope's hand control,  would ruin the roundup.

And so, it began. I settled on a 22mm Panoptic as the eyepiece of choice. It would take a 1.25-inch filter, and would provide me with sufficient magnification to jack up the contrast. Since I was using a Denkmeier Powerswitch diagonal in the C11, I could go up and down in magnification without taking my eye from the eyepiece or fumbling for a different ocular with the aid of a red light.

I began the hunt not on the area of B33, but at NGC 2024, the Tank Tracks Nebula (a.k.a. "Flame Nebula) near Zeta Orionis. Always check 2024 first. If it’s not prominent on any given evening, you don’t have a dog’s chance in Hell of seeing Horsey. Luckily, the dark lanes that define the Tank Tracks were very clearly seen, so I moved the NS11 to the scene of the crime.

When the scope stopped, I was once again amazed at the NS11’s accuracy. It was bang on: there was NGC 2023, and there were the other two stars that point the way to B33. I was also pleased to see that 2023 was very prominent around its star. Horse oughta jump right out at me, right? Ha! Not only did I not see B33, I wasn’t sure I was seeing even a trace of the emission nebula background the dark Horsehead is superimposed on, IC434.

It would have been easy to give up at this point. Just sigh and say, “Conditions ain’t good enough tonight,” and look at M42 some more. I’m proud to say I stuck with it, trying all the tricks in the book: averted vision, jiggling the scope, hyperventilating. Heck if there’d been Billberry berries growing on the field I would have gobbled handfuls of ‘em. Alas, still nothing.

Or maybe almost nothing. As Orion moved on toward culmination, I began to realize half the field, or maybe about a third of the field, was subtly brighter than the rest. As time went on and I continued to look, I began to make out the incredibly vague vertical streak of light that is IC 434. For quite a while, that was all I could see. No matter how hard I stared I simply couldn’t see the 6-arc minute “bite” out of IC 434 that is the Horsehead. Until…

Suddenly, there it was. Oh, not a Horsehead, but a notch or a bean-shaped superimposition of a slightly darker something on the filmy dimness of IC 434. It would snap in occasionally, maybe as the seeing changed. I found that if I took my eye from the eyepiece and then put my eye back to the ocular, the Nag would pop in with some regularity. Just to make sure I wasn’t fooling myself, I called my fellow star partier, Pat Rochford, over for a look. His reaction, “Yeah, there, but it sure as hell doesn’t look like much.”

Truthfully, it doesn’t. B33 is a member of that class of deep sky objects I call the Beentheres. They are not overly attractive, if at all, to the eye; their prime attraction is that you can say you’ve "been there" (sorta like observing M101 from the light polluted suburbs)…it’s just a badge of honor just to say you’ve seen them. Be that as it may, I know this old hillbilly was absolutely thrilled to have done this observation, finally.

Have you corralled the Horse? Have you netted the Nag? If you’re a member of our little band, the Lords of the Horse, those observers who’ve seen B33 with their own eyes through their own telescopes, I’d love to hear from you and hear your experiences and tips. As for me? When my eyes stopped bleeding, I went back to M42.