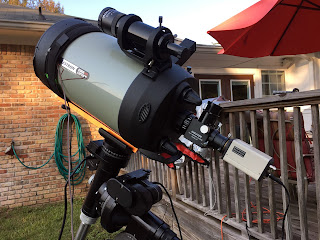 That doesn’t mean I don’t like the new style digital astro-video cameras. I’ve reviewed a couple of them for Sky & Telescope Test Reports and was impressed. Their strength is that they are far more able to deliver pretty, smooth-looking images than the analog cams were. And those images sure are easier to get into a computer for manipulation than analog video was. You no longer need one of those blasted frame-grabbers; just plug a USB cable into the camera and laptop and you are ready to go. It ain’t all gravy, though. Analog cameras like the Mallincam Xtreme are still more sensitive than almost anything else.

Those were some of my thoughts as I pulled my Xtreme from her dusty case and mounted her on a telescope for the first time in nearly three years. I was in a hurry to get some images for a magazine article, and was pretty sure video would be the quickest way to do that. Which is just one of old-fashioned style video’s pluses. But why, then, had my Xtreme sat unused for so long? Maybe because I'd rarely observed with anything but video when I was doing the The Herschel Project.

The Herschel Project, which I began in earnest in 2009, was my quest to view all 2500 of the deep sky objects recorded by William and Caroline Herschel. It was the biggest observing campaign of my life, and finishing it in about three years as I planned meant night after night of pedal-to-the-metal observing, much of it with video, was required.

While I could have done all, or nearly all, of the H objects visually with my larger scopes, that would only be true given excellent dark skies. At my club site, I needed video to reliably bring home all the small and dim galaxies that infest the list. That’s why I started using video for the Project, anyhow. Frankly, I became so fond of observing the Herschels with my Mallincam Xtreme that I began using it even under dark skies, like in Chiefland.

For a typical Chiefland Astronomy Village run, I’d set up my NexStar 11GPS, Mallincam (Stellacam in the beginning), and sit under a tent canopy until three or four in the morning, controlling camera and telescope with a laptop PC running SkyTools 3, NexRemote, and the Mallican control software. I considered it a poor evening if I didn’t log and record at least 100 objects. In a typical three-night CAV visit I could easily bag 300 of the list’s faint fuzzies.

So, I basically wound up doing nothing but video during the over three years of the Herschel Project. It was fun, but after that much of it I was glad when it was “fun is fun, but done is done.” After crossing the finish line, I wanted something different, which turned out to be DSLR imaging most of the time and visual the rest of the time. There’s also no doubt the changes I’ve been through personally over the last three years have meant that, while I’m still an enthusiastic amateur astronomer, I’m quite not as hardcore as I was during the go-go days of the Project and not as apt to set up the ton of gear a video run requires. 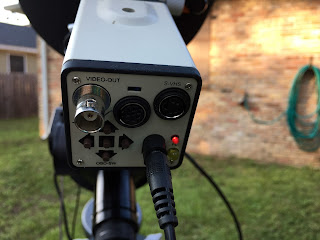 Anyhow, as I mounted the old Xtreme on the rear cell of the C8, some great memories of the height of the Project came flooding back. All those evenings at Chiefland counting Herschel galaxies by the score in places where I’d never seen a single galaxy, like the wilds of Boötes.

The more I thought about it, though, the more astronomy video seemed to be mostly a creature of the Herschel Project for me—even though I’d become infatuated with the idea six years before the Project began, in 2003, at that year’s Astronomical Convention held in Nashville. There was a Stellacam and Meade 10-inch LX200 SCT set up in the parking lot one night and I couldn’t believe what they pulled in from orange-pink skies near the Nashville airport. I just had to have a Stellacam.

I got one, too, shortly thereafter, and while I used it a fair amount at first, that was just at first. It was soon back in its case for extended periods. I couldn’t find a use for it. The video camera seemed neither fish nor fowl. Lacking the personal and immediate magic of visual observing, but not offering the more finished pictures of “real” astro-cams.

That was the way it was until I started in on the Herschel Project. When I did, everything finally clicked video-wise. As above, I could observe dozens and dozens of objects every clear night, literally tearing through the 2500 DSO list. No, they didn’t look as good as they would have in, say, a long exposure DSLR image, but, frankly, many of those objects, as mentioned above, are bland, small galaxies, and don’t have a lot of pretty to them anyway. As opposed to visual? Man could I go deep with video.

I’d known that even before the H-Project began, like the night at the Deep South Regional Star Gaze when I began imaging Hickson galaxy groups and found my C11 and Stellacam (which was limited to 10-second exposures) could show any Hickson group member visible in the Digitized Sky Survey Plates, which were taken with the 48-inch Schmidt Camera at Mt. Palomar. Yeah, I was going deep, real deep, but without a 30-inch telescope to haul around (and pay for).

When my desire for color led me to replace the Stellacam with a Mallincam Xtreme about of a third of the way through the Herschel Project, I found just how deep I could go. A 1-minute exposure would take me to the realm of quasars, easily recording the ancient objects (see the quasar video at the bottom of the page, which I did in 2015 just before I put the Xtreme away) as well as the little sprites of PGC and UGC galaxies that haunted nearly every field.

Don’t get me wrong; I wasn’t just seeing the ferociously dim, either. There was also detail, plenty of detail, and not just in brighter objects. As the Project was winding down, I hunted Arp (peculiar) galaxies for a while. Not only could I see them, I could almost always at least make out a trace of the odd details that led Halton ARP to add them to his list.

But then the H-Project was over. In addition to me wanting prettier pictures when I took pictures, there was also that “less hardcore” take on our avocation. There is no denying analog video is “stuff” intensive. You have multiple cables, a PC, power supplies, and, if you don’t want to involve frame grabbers, you’ll need a separate monitor to view the video and a DVR of some kind to record your objects. The times I wanted to pull out that amount of gear became fewer and fewer as the H Project receded farther and farther into the rearview mirror.

And there things remained. Oh, I did do a bit of playing with the excellent little Revolution video imager, which I still think is a wonderful buy, and is about as self-contained at kit as you can get, but it had literally been years since the Xtreme gathered photons. Not since that quasar run during my final spring Chiefland expedition in early 2015. 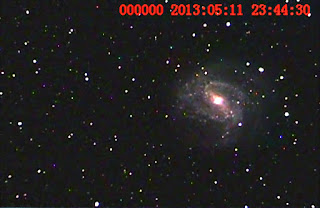 Which brings us to today. What did I think of the Mallincam Xtreme mounted on the back of the Edge 800 now? Some of the old annoyances remained. I don’t like frame grabbers, so I had to drag out a monitor (my old portable DVD player) and a video switch to route signals to it or to the DVR as desired—the camera doesn’t have enough drive to allow it to be hooked to both at the same time without an amplifier. And wouldn’t you know it? The first video cable I hooked between camera and switch turned out to be bad. So it goes in the analog world.

Those were the annoyances, however. The strengths of video were also on display. I was correct about how easy it was to get recognizable pictures quickly. Once I had everything properly hooked up and the bad video cable banished to the trash, it was a snap to produce usable images.

At first, I was afraid I wouldn’t remember how to run the Mallincam control software on the laptop, but it all came back rather quickly. It’s pretty user friendly as esoteric programs go, and I used it a heck of a lot over the years of the Herschel Project. After just a little fiddling around with the settings I was getting surprisingly nice video pictures.

The images I needed for the article safely on the DVR’s SD card, I had time for a little fun before the clouds rolled in, and pointed at some of the late summer DSOs sinking in the west (I absolutely love the new Losmandy’s Gemini 2 goto system). No, the video pictures didn’t have the look of carefully processed DSLR photos, but you know what? They were not bad at all. The stars weren’t grain-of-sand pinpoints, no, but there was nice color, and the frames coming over were not nearly as grainy and noisy as I “remembered.”

So, the final verdict on analog astro-video. REAL astro-video, if you will? I think it still has a place for those of us who own analog cameras, or who are interested in an inexpensive set up like the Revolution Video Imager (a mere 299.00 including a monitor and the other accessories you will need to get going). For those who don’t have an analog camera and want a top-of-the-line one like the Xtreme? Not so much.

The problem is that the base Xtreme is $1300.00, more than some of the new digital video setups (including the Mallincam SkyRaider DS2.3+ and the Infinity from Atik). The premier Mallincam now, the Xterminator, is over $1700.00. While these analog cameras are definitely more sensitive than their digital sisters, that sensitivity does come at the expense of more noise, smaller sensor chips, and images that are more difficult to process. The digicams are actually quite sensitive and more than usable for near real-time video style observing, but they also can be used to produce respectable long integration images.


I do have an Xtreme, however, it still works every bit as good as it did the day I put it away years ago, and I doubt it will stay in its case for another three years. I’m not going to take on the Herschels again, but when I want to capture something way far, far away on the edge of the Great Out There, the Xtreme, the Revolution, and their analog sisters are still the winners hands down.

Note:  You can view these videos full-screen by clicking "Youtube."