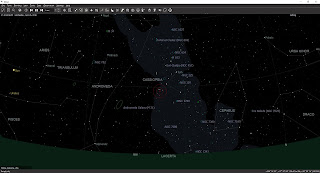 If you’ve been reading these little epistles for a while, you know I one of my uses for planetarium software—programs that create a graphic representation of the sky on your desktop—is to send my goto telescope mounts on their gotos. When I am imaging, anyway. It’s nice to be able to sit at the laptop with the camera control software running and send the scope to its next target with a mouse-click. No getting up and walking out to the scope (which is set up in the yard while I operate from the deck) to fool with the hand controller. But I do have another use for planetariums, one that’s just as important.

My other use for Cartes du Ciel, Stellarium, and the rest is for quick reference. I want to know what’s going be up at 8 p.m. Or I’m writing a magazine article and need to find out where faint fuzzy number one is located in regard to faint fuzzy number two. Sometimes I need the objects’s basic statistics: the spectral type of a particular star, the magnitude of a cluster, the Hubble type of a galaxy; you get the picture.

For most of my indoor use, I do not need a soft with ten zillion stars and galaxies in its database. I need a program that is, most of all, quick to launch. If a soft takes more than 15 – 20 seconds to start, I become annoyed. I just wanna see when Orion’s gonna be up good and high, and I don't want to wait all freaking day to find out. So what do I use?

Let’s turn the clock back, way back (well, relatively speaking) to the early 1990s. The first truly useful astronomy program I encountered is still one of the best for quick reference—or would be if you could get the DOS based SkyGlobe 3.6 to run on a post-Windows XP machine. Skyglobe was, above all, fast, blazingly fast, to load even on my old 486 (don’t ask, kids). I was still using it when my Toshiba satellite running XP finally gave up the ghost.

After that? I foundered and floundered for a while. Cartes du Ciel is a wonderful program. It’s free, but nevertheless is still one of the greatest astro-softs to ever to be published. Problems with it? While it’s its GUI has gotten a little fancier over the years, it’s still pretty old fashioned in that regard. And the graphics, its depiction of the sky, are old school for sure. More Skyglobe than TheSky X. That last is not a huge problem for my use, but I still like a pretty display, I must admit. CdC is certainly quick to load, too, if not Skyglobe fast. In about 15 seconds max it is ready to roll on my middle of the road desktop.

I was happy with CdC for a long time. It was basically all I used day in and day out for everything, including for indoor reference, sending my Celestron mounts on gotos, and serving as a front end for EQMOD. I doubt I'll ever stop using Cartes. It simply does some things no other freeware soft does. Just because CdC is a good thing, however, that doesn't mean it is the only thing.

One day I discovered Stellarium. It was just so pretty. And was every bit as fast to load as Cartes du Ciel. Moreover, its drag-the-sky-with-the-mouse trope was so smooth and fast that it was love at first sight. The same went for most of the rest of its GUI. I loved Stellarium, and once hailed it as “the new Skyglobe.”

Alas, there’s this thing called “feature creep.” Stellarium has grown up, and, like a lot of us, in middle age it’s grown out, too. It has put on a few pounds virtually speaking. Even if I don’t turn on much of its extensive (and amazing) feature set, the current release has me tapping my fingers as it loads up—it now takes as long as 30-seconds (like many programs, it’s faster if you’ve recently run it). That may not sound long for you, but it's an eternity for your impatient Uncle Rod when he’s got a hot observing idea or an inspiration as to a target to add to an observing article.

Then, I happened to read a post on everybody’s fave astro-BBS, Cloudy Nights.  A post about a program I hadn’t heard about in a long time, KStars. If you, like me, once fooled around with Linux, even for a little while, the program's name is probably familiar. It was one of the (few) serious astronomy apps for that operating system when I was going through my Linux phase. Reading the post on CN, I was surprised to learn the program is not only still around, it is still being developed. There is now a version for, believe it or not, Windows 10. Huh! From running it on Linux (under the K desktop, natch) I remembered it as small and fast and thought I’d give the Win version a try.

Installing KStars is simplicity itself; simply download it (here), and double click the install file when Windows (or Linux or OSX) finishes. Installation is automatic with no unzipping or anything like that required.

Installation complete, I clicked on the program’s icon (which I had to send to the desktop manually; it wasn’t placed there automatically) and got out my stopwatch. In less than 10-seconds the program was up and prompting me to begin set up. Which was also painless. About all KStars needed to know from me was my location. You can enter latitude and longitude manually, or just click on a city from KStars long list. After that, all that remains is the additional files window.

Like most modern programs, KStar offers an extensive set of supplemental object catalogs and image files. You can have millions of stars and deep sky objects if you wish. Me? I didn’t wish. In the interest of keeping the program small and quick, I only downloaded one additional item, thumbnail type images of the NGC objects for display in the information window that can be displayed for deep sky objects. If you should change your mind about additional files,  it’s easy to run the installation wizard again later and add or remove files as desired.

What was my first impression of KStars? “Pretty enough. The display ain’t as attractive as Stellarium’s but looks more modern than that of Cartes du Ciel.” Experimentally clicking and dragging the sky around to change my view yielded good results. It was every bit as smooth as this function is in Stellarium. I did note dimmer stars and DSOs are erased during a drag—presumably to speed things up (Stellarium doesn’t do that).

Like other planetarium programs, the next step is to turn on/off features you want or don’t want. With KStars, that mostly involved turning on the constellation lines and setting up labels and their densities (numbers) for constellations, stars, and deep sky objects. When I had the program looking he way I like, I did a little playing around to get the lay of the land.

First thing, I picked a DSO, good, old M81, and clicked on it. I wanted to see what sort of data KStars would yield about targets. To do that, right click on an object and select “details” from the menu that appears. What I got is shown above, which is not much. The galaxy’s Hubble type isn’t even given.  All there is is magnitude, position, size, and alternate designations. That’s the bad. The good is that clicking the "links" and “advanced” tabs brings up hyperlinks to web pages concerning the object, and to resources like NED, the NASA Extragalactic database. Unfortunately, I was disappointed to find that many of the web page hyperlinks in the details window are dead links.  Moreover, even if the URLs all worked, I would like a little more info on objects in the program itself. Both Stellarium and Cartes du Ciel do much better here.

One of the things I do most frequently when writing about deep sky objects, is, as previously mentioned, describe their positions in terms of their distance from another object in angular degrees and position angle with regard to that other object, “M78 is 2-degrees 30’ northeast of Alnitak.” Alas, while you can engage an angular separation mode that measures the separation of two objects when you draw a line between the two with the mouse, KStars only gives separation, not position angle as well like most other programs do.

At first, I thought that was it for KStars. Knowing both separation and position angle is important for me. Then, I discovered KStars’ astronomical calculator. One of the many functions it performs is determining the separation and angle of two objects. It’s easy to select objects from a list, and a push of a button then gives both angular distance and position angle. Frankly, I found this easier (and more precise) than using a mouse.

Otherwise, what’s the program like? Oh, it’s fairly basic stuff. It has some built-in pictures for the more prominent objects displayed on the charts. Various reticles (like a Telrad) can be overlaid on the maps. A red night vision mode can be engaged. Unlike Stellarium, you can print charts (if not very good looking ones). There’s even telescope control. Alas, that’s via INDI, not ASCOM. I don’t know that I’ll fooling around with that, but I don’t really intend to use KStars on the observing field, anyway.

So, to sum up? It’s a useable program for just about anything. Is there a reason or reasons to use KStars instead of the big two freeware planetariums? Yes. If you, like me, need fast. Or you need small. Or maybe hardware constraints dictate you need both, you could do worse.

Much as I miss good old Skyglobe, I must admit humble KStars just blows its doors off. And that's good. But. Will I use it? How much will I use it. That remains to be seen. I like KStars, but I’ll admit it’s gonna be hard to make myself stop using those old reliables CdC and Stellarium. Stay tuned.