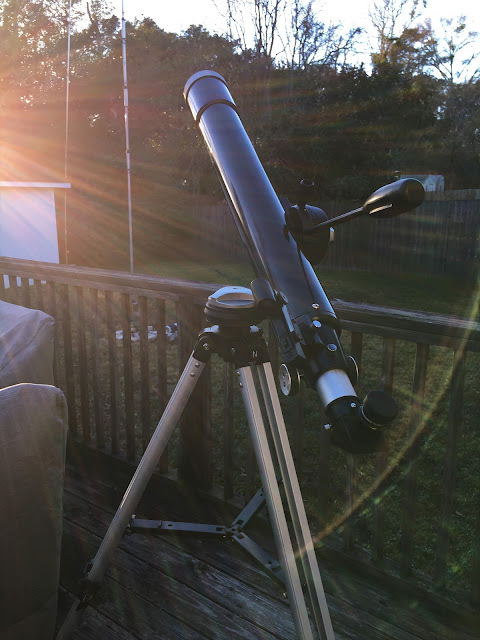 Well, I did manage to sneak in another issue before this cursed year was history, muchachos. I wasn’t sure if I was going to be able to do that or not, though. It’s been cloudy more often than it’s been clear this December, and the clear nights we have had have been unseasonably cold for us down here on the borders of the Great Possum Swamp.

That’s a problem for your correspondent of late, since, for some reason, I seem to feel the cold more acutely after my accident last year. Much as I might want to do some observing, the idea of shivering in the dark sometimes keeps me inside. Be that as it may, I did get out one recent chilly evening. How could I not? It was the GRAND CONJUNCTION.

Like everybody else, your old uncle was very much looking forward to the once in a lifetime experience of seeing Jupiter and Saturn in one eyepiece field. Howsomeever, as the 21st of December approached I sensed not all was sweetness and light with my fellow astronomers. What was raising some of you folks’ hackles, oddly enough, seemed to be the public’s excitement about the event.

Yeah, that did seem a mite strange. Most of us want mom and pop to look up and see the stars. Alas, some of us also insist that has to be done our way, with respect and no appropriation of our turf. What I’m referring to is irritation over the conjunction being touted in the media and by the man-on-the-street as “the Christmas star.”

Why did that bother anybody? Well, some of us said it was merely because they wanted the facts clear in the minds of the public. This wasn’t any star. It was merely an effect of perspective. The two planets only appeared to be close to each other in the sky from our vantage point. There was no magic or miracles to it. “Why can’t we just stick to the cold, hard, immutable laws of physics?”

“Now, now. Calm down, y’all” was my advice. I suspected most of the general public actually knew the conjunction wasn’t a star, but the planets Jupiter and Saturn. The reports I saw on CNN and MSNBC certainly emphasized that.

Anyhoo, I believe the problem for some of us wasn’t so much  our fear the public would confuse planets for a star as it was the religion angle. But you know what? For many people, including people in the sciences, even in these latter days,  faith is important. Very important indeed. And if this conjunction reaffirmed that faith and brought a little hope at the end of a dark year, so what? Is that such a bad thing? What’s also worth noting? A conjunction very much like this one did take place in 3 BC.

Another irritant for not a few sky watchers? That darned public was poaching in our private preserve. Trying to filch OUR conjunction. We’ve seen this before with Blue Moons and Super Moons. I admit the latter used to drive me bananas, too. Until the night I was strolling Selma Street back in the heyday of Chaos Manor South on the evening of one such Super Moon...

I was all primed to tell any of my neighbors who inquired, “Sorry, the difference in the size of the Moon is undiscernible by the human eye. There is nothing ‘super’ about it.” That’s what I was gonna say until I noticed all the little families gathered on their front porches gazing at Luna in wonder. Instead, I bit my tongue and let them marvel at a glorious sight.

Which is what I advised folks in our community to do when the subject of the Christmas Star came up. I took some heat for that. But I didn’t care. I took quite a lot of heat for a Focal Point (editorial) I wrote for Sky & Telescope many years ago wherein I opined the (now bygone, I guess) practice of buying and selling stars was maybe not the bad thing some of us made it out to be. I didn’t care then, either. If “buying” a star or gazing at a Christmas one causes someone to wonder, I am happy.

Anyhow. Enough editorializing. I wanted to see that Christmas Star with my own eyes. The question was how. It didn’t take long for me to decide I’d do it simply. No fancy cameras or tracking mounts. Just my 80mm f/11 SkyWatcher refractor, Midge, on her AZ-4 alt-azimuth mount.

There were several reasons for that. Given our weather of late, it wouldn’t be unlikely we’d be clouded out at the last minute and I’d be setting up a big scope just to tear it down and carry it back inside a few minutes later. Also, the planets would be awfully low by the time darkness came on December 21st. I suspected I’d have to move the scope around to avoid trees. Finally, I just wanted to enjoy the event and maybe show it to a neighbor or two, not worry over cameras and computers.

So…when it started getting dark on the 21st I hied myself to the backyard with the SkyWatcher. Nope. Jupe and Saturn had gotten a lot lower since our last clear spell and were now in the trees. To the front yard I went with the 80mm and a box of inexpensive Celestron Plössls I won at a star party some years ago.

Almost ready, I had a quick look at the fattening Moon so I could precisely align the red-dot bb gun finder on the scope—Selene was beautiful, natch. But I didn't linger, quickly moving over to the pair of planets—who were now, indeed, a single point to my eyes. In went a 13mm Plössl, and to that went my eye.

To say the sight was a beautiful one would be an understatement. It wasn’t just that the planets looked good in the (relatively) long refractor. It was the idea of the thing. Those two enormous gas giants in one rather small eyepiece field. Furthermore, it was the realization that Jupiter was a much closer foreground object than the ringed wonder, who was about twice as distant as Jove. Pondering on that and looking and looking almost made it feel as if I were seeing the depth of a 3D image…and I almost thunk myself into a mild case of vertigo!

While it was the juxtaposition of the two that was so striking, there was no denying my inexpensive refractor was delivering the goods. At 68x, there was plenty of banding detail and color on Jupiter. Saturn was a deep yellow, showing off Cassini’s Division and a little disk detail. Upped the magnification to 150x and they still looked great despite the fact the Christmas Star was getting lower and lower and the seeing was naturally becoming lousier and lousier.

The SkyWatcher, Midge, came to me quite a few years ago and for only one reason:  I fancied her mount. I had originally intended to buy the alt-az rig from Orion, where it was badged “Orion Versago.” Luckily, I announced that intention on a Cloudy Nights forum, and a kind person clued me in to the fact I could get the same mount for less money from B&H Photo, where it was being sold as the SkyWatcher AZ-4. And not only that, the SkyWatcher package included an 80mm f/11 achromatic refractor.

Naturally, I went for the SkyWatcher and immediately recognized Midge was a fine little telescope. Beautifully finished tube, good focuser (though only a 1.25-incher), and surprisingly good optics. I will admit the scope was little used for the longest time. But a decade later she is out in the backyard a lot. She is trivial for your now somewhat feeble old uncle to set up—if I am just going to be giving something a quick look, I leave the eyepiece tray off the tripod, and am able to quickly collapse the legs to maneuver through doorways.

Anyhow, Midge and I viewed the Christmas Star for quite a long time, showing her off not just to Miss Dorothy and my neighbors, but to a couple of passersby who stopped their cars and got out to ask, “Can you see it? Oh, that’s it over there? Can I look?” It was a lot like a long-ago morning when little Rod spied an elusive but beautiful visitor from Mama and Daddy's front yard.

Eventually, of course, the Star really got down into the mess at the horizon. Before winding things up, I held my iPhone up to the eyepiece and shot a few pictures. Not because I expected much of an image, but just so I'd have a "souvenir" of the evening. I went back to the pretty Moon and shot a few of her as well. Soon thereafter, your uncle retreated to his den for a warming potation and a second viewing of the season 2 finale of The Mandalorian.

I am always a little stressed out over big astro-events that capture the public's attention. There have been a lot of Kahouteks over the years, afterall. But this was one astronomy Special Event that really worked out; not just for me and my fellow astronomers, but for everybody, and for that I am glad.

These latter-day Christmas Eves are nothing like those huge Christmas Eves of yore at old Chaos Manor South with a giant tree and little kids, eyes full of wonder, running everywhere. And no trips to old El Giro's for margaritas like we used to do each Yule eve, either. This Christmas in the Year of the Plague was an even more quiet one than those of late. Just me and Miss Dorothy. On the morrow, I’ll fix a nice Christmas repast for two (I’m doing a ham this year) and see what the Jolly Old Elf brought me.

Whether I get out with a telescope or not between now and New Year’s, I’ll be back before long with an article to, if nothing else, tell you WHAT I GOT! Have a beautiful holiday, muchachos.

"Wait just one cotton pickin' minute, Unk! Ain't you forgettin' something?!" Almost did:  My traditional Christmas Eve viewing of that greatest and most numinous of ornaments, M42, The Great Orion Nebula. It hadn't looked good when I had arisen at my accustomed 07:30 on Christmas Eve morning. Windy, thunderstorms, generally yucky. Looking at Accuweather on my phone (I got tired of the Weather Channel's pop-over ads), and the Clear Sky Clock (I will never call it "Chart"), however, showed maybe there was some hope.

Following my normal Thursday night routine, checking into the Lockdown Fun Net on 28.420Mhz, I peeped out the radio shack door. And there was Rigel shining on like some crazy diamond. I hurried into the house, fetched Midge, and inserted the 17mm Koenig eyepiece I'd purchased at the 1993 Deep South Regional Star Gaze into her diagonal. Best view of M42 I've ever had? No. This was a 3-inch telescope under suburban skies with a waxing Moon nearby. But beautiful? Yes. I looked upon it as a good omen.