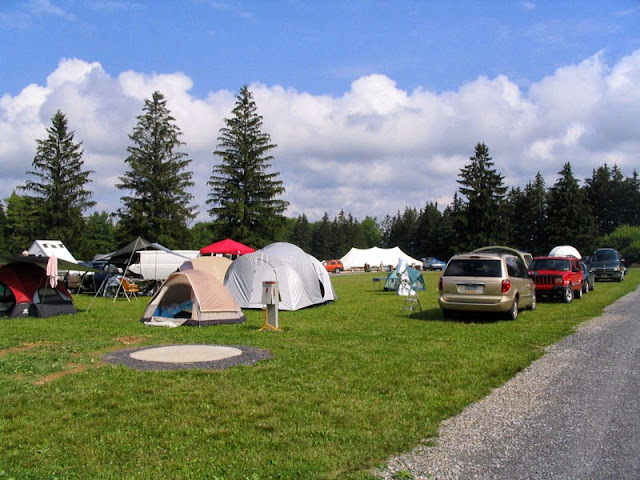 I've been to star parties in most parts of this country since attending them became a popular thing for amateur astronomers to do. But, you know what? Until the other day, I had never, ever been to one north of the Mason Dixon Line. I have been out of the deep south--most notably to Texas and the Texas Star Party, but never to the honest-to-got north.

That being the case, when I was invited to speak at the Cherry Springs Star Party way up in Pennsylvania, near the little town of Coudersport, PA, I just could not resist. Well, that wasn't the only reason. This location, Cherry Springs State Park, just over the New York line, is justly famous for the Black Forest Star Party, a long-time fixture of observing life in the north.

The only bad part of Cherry Springs? Getting there. The powers that be just don't expect someone to want to fly from Mobile, Alabama to Elmira, New York (the cloesest airport to the star party). Your poor, old Uncle had to embark on a journey that involved three separate airplanes with stops in Philadelphia and Charlotte, NC.

Not only were the U.S. Airways (aka, "Aeroflot") flights...err..."unpleasant," they were late, with me not getting into Elmira till 5pm. Evening was coming on in a few hours, it was raining, and fog was rolling in. So, I was a little paranoid about negotiating the 80 miles between Elmira and Cherry Springs, completely unknown territory for me, in these conditions.

I needn't have worried. In this age of online driving instructions, it fairly simple to find the star party location without a single wrong turn despite loads of road construction and detours. The only problem Your Old Uncle had was READING the printout of directions with his middle-aged eyes. I had to put on my readers to make them out, but had to remove those glasses to drive safely. I'm thinking it might be about time for me to get one of those new-fangled GPSes for just such occasions. Anyhow, I rolled into the park at just after 6:30pm as darkness began to really fall--and rain with it.

Folks, Cherry Springs State Park is a wonderful site, which features very dark skies thanks to the fact that  there isn't much else in the area otherwise. The astronomy activities at the park enjoy the support of the State of Pennsylvania (when was the last time you visited a state park and saw a sign directing you to the "astronomy field"?). The State is also in the process of building domes for big Dobsonians, wiring the (expansive) field for electricity, and pouring concrete for observing pads.

Upon my arrival (Friday, June 23, 2006), I was able to meet a few of the Cherry Springs folks from the Astronomical Society of Harrisburg. They were pleased enough to see me, I suppose, but didn't seem to be in very good moods. Mostly because of the weather, I guessed. There had been little or no observing on the first night of the event, and it looked like the second evening would be even worse. I'd say, frankly, weather is the biggest bringdown for Cherry Springs. When it cooperates, the sky is wonderful. Unfortunately, it has a bad habit of not cooperating.

I spent a little time surveying the site and talking to the few astronomers not under cover in tents and RVs, but not much. Between the rain, chilling (in June!) fog, and me being tired, a little voice inside told Uncle Rod to head his Saturn Ion rent-a-car for the motel in Coudersport. More on that and the star party itself next time...