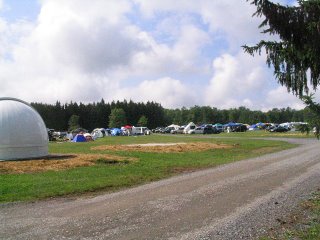 After finally arriving at the Cherry Springs Star Party late on a wet and foggy northern Pennsylvania afternoon, your old Uncle Rod spent an hour trotting around the observing field, meeting CSSP organizers from ASH (The Astronomical Society of Harrisburg), and getting the lay of the land. In truth, though, there ain’t much fun to be had in surveying a field full of Desert Storm covered telescopes. How about that nice, big dealers’ tent? It being almost 7pm, most of the dealers had decamped. Shoot! But I had to admit I was a mite tired after 12 hours of flying and driving.

I hate to waste star party time sleeping at a motel, but there was really nothing for it. I got driving directions to the little town of Coudersport, Pennsylvania and the Mill Stream Inn where I’d be staying and headed on out. It was getting dark by now, and I was very mindful of the warning I’d been given to “watch out for the deer.” Bubba (my countrified friend, you know, bib overalls, shaved head, no shoes, 300 pound physique) would have had a fine and illegal time…I must have counted at least eight does on my way down into Coudersport, about 10 miles.

The Mill Stream Inn turned out to be a clean and spacious hostelry with some features I don’t normally associate with country motels: wi-fi Internet, a good selection of satellite TV channels, and a decent continental breakfast. I don’t mind telling you I was beat. Figgered I’d have a beer and turn in. Gas station? No beer. Convenience store? No beer. One of the locals told me I’d have to head over to the town bar, “The Beef and Ale,” where they’d be happy to sell me a sixer. ‘Deed they were. A couple of the local Yuengling brews and it was night-night time.

Next morning, Saturday, 24 June, after filling up on motel donuts, I headed back to the site. Wow, lots of scopes, and at least some familiar names from my Internet user groups. After visiting with numerous very nice folks (I take back all those bad things I’ve said about Yankees over the years), I headed to the dealers’ tent.

In spite of the generally poor weather--part of the first night of the event had been clear occasionally--the dealers' tent was just about full. In addition to TeleVue, Camera Concepts, Knight Owl, and others, I found my buddy Bob Black had a nice spread set up. His new company is called “Skies Unlimited,” and I predict big things for it. Before long, Denkmeier, the binoviewer guys, showed up with a bunch of their gear. I was very pleased to be able to meet the “Denks” in person, finally. Did I buy anything from any of these excellent vendors? I got a nice APO barlow from Knight Owl and left it at that.

I spent the balance of a wonderful day touring the field and talking with amateurs. As ol’ Sol finally began his descent, I realized it was almost time for my presentation, “Everything You Always Wanted to Know About Video Astronomy, but Were Afraid to Ask.” I hope the nice people of CSSP didn’t find my down home humor, an integral part of any talk I give, too “rustic.” Whether they did or not, I subjected ‘em to a whole lot more of it after the presentaton as well, since I was the designated “prize ticket puller” for the raffle (lots and lots of cool prizes, you betcha). Whether they found my Southern Manners tiresome or not, my audience was very nice to me, that’s for sure.

What’s a star party really about, though? Observing. Almost magically, despite the dreadful weather that was being experienced all over the northeast at the time, the heavens opened up for us for a little while on Saturday evening. While there was still some haze, the sky was dark and the summer Milky Way dramatic.

I found myself in the odd and unenviable position of being at a major star party without a scope. Luckily, this did not last. The Meade rep allowed that seeing as how I probably knew more about running a 10-inch RCX400 (or any scope) than he did, I should take the controls of Meade’s new top of the line CAT. I didn’t protest too much (!). I spent a couple of hours sending this fancy new SCT (you read that right) from one deep sky wonder to another. I was impressed both by its features and its sharp images, and will be writing a more in-depth article on the scope for the blog in the near future.

All too soon, though, it was midnight. That was “pumpkin-time” for me. There was that punishing trip back down south the following morning. I know it’s a wee bit corny to say so (I’m a cornball at heart), but I left Cherry Springs with a heavy heart. I hope to return some day soon, and want to thank the fine folk of the ASH and the Cherry Springs Star Party for the wonderful reception and the wonderful time I had.