Celestron's SkyScout: Uhhh! What is it Good for? 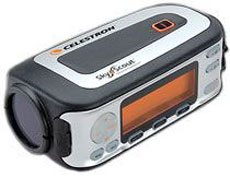 Absolutely Nuthin’?
That was my initial impression when I heard about the Celestron SkyScout “star finder” a year or so ago. Oh, the concept sounded interesting, I'll grant: take an enclosure about the size of a small camcorder and equip it with a GPS receiver, a digital compass, and a level sensor. The user points it at “something” in the sky, a star, a planet, whatever, and the little gadget identifies said object, both on an LCD display window and via audio. The audio spiel doesn’t just say “Sirius,” either, it includes a nice commentary on the star (and many other objects). Add a “Locate” mode that guides users to chosen objects, nightly tours, constellation stick figure displays, and the ability to upgrade the firmware with a USB connection and add new features via an SD card slot, and, yeah, you’ve got a right interesting little device.

Then I saw the price, $399.00, which gave me pause, you'd better believe it, Bubba. No, 399 ain’t that much in these affluent times (to you, maybe, anyway), but as I began ruminating about the utility of the device, this price seemed to attain larger and larger significance. Given the capabilities of the SkyScout, I imagine a prime target audience of “12 and under” along with some older teens. This audience probably would enjoy the SkyScout (for a while, anyway), but I would guess their parents, even those somewhat free with money when it comes to iPods and Xbox 360s, might balk at opening their purses and wallets one more time given the limited utility of the SkyScout. While I wouldn't say an Xbox has much educational value, it does have enduring fascination for the young set. It damned sure gets used (admission: I like it too).

So, the bottom line? The "catch" when it comes to the SkyScout is that it is not a telescope (think TELRAD, no light gathering power). Given this overriding fact, it seems to me that the SkyScout will be of very limited interest to amateur astronomers, or even to the lollipop set: "Well, this here pinpoint is Sirus, this one is Rigel, this one is Saturn, and I think I am now going inside and play Halo III.” Sure, I admit the average teen or amateur astronomer could have a lot of fun with this for a few nights, but, no, I’m not convinced of its enduring appeal and hence value at this price.

At $199.00 this would be an incredible buy for anybody; just for the built-in GPS receiver.

However, your old Uncle Rod must admit he has not yet seen a SkyScout in person, much less used one. Maybe I’m missing something. One thing I do know? Folks are snapping up SkyScouts like beer and peanuts at the ballpark. Celestron's little gadget, I’m told, is backordered and is being sold on eBay for $599.00 e’en as I speak. Is it the next Cabbage Patch Kids? Will parents be fighting over these things as Christmas approaches?

Me? I’m willing to be convinced. I suppose I could find some use for one of these (maybe helping me and the public get oriented at my star-poor urban star parties), but I am still shakin' my head. Maybe it’s just that, to this child of the 1960s, 400 George Washingtons is a lot of money!

Comments:
re:Uhhh! What is it Good for?
Absolutely Nuthin’?

when I read that I sat here and laughed SOOO hard! Absolutely priceless words wow that was funny whew!