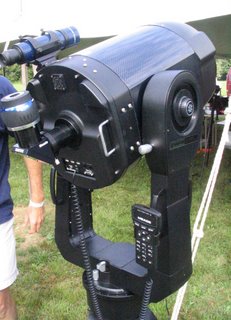 Lately it seems as if the astronomy business community has gone lawsuit crazy. It began a couple of years back with Meade’s and Celestron’s destructive suits and countersuits against each-other, legal wrangling that arguably left both companies weakened. Now I’m told a couple of Ritchey Chrétien telescope makers (and maybe one scope vendor) have brought suit against Meade instruments.

This lawsuit, I’ve heard, asserts that Meade has wrongly advertised/sold its new line of RCX400 telescopes as Ritchey Chrétiens when they are nothing of the sort, and that that has resulted in financial losses for the two companies bringing suit. This all seemed a little far-fetched to me, but the suit is apparently very real, though I’ll add the caveat that I have not yet been able to track down a copy of it.

What do I think? Like most amateurs, I’ve been aware from almost the beginning that Meade’s “Advanced Ritchey Chrétien” design is only peripherally related to what most people would call an R-C—that is, a Cassegrain telescope with hyperbolic primary and secondary mirrors and no corrector plate. It appears the RCX is possessed of a spherical primary, a hyperbolic (or, according to one optician who tested an RCX, parabolic) secondary, and a corrector plate. To me and to quite a few other amateurs, this spells “aplantic SCT” rather than “Ritchey Chrétien.” Just more pie-in-the-sky Meade hype, huh?

The true test of this telescope, I thought, would be how well it performed and lived up to its billing. When I finally got to try one I was suitably impressed (see my blog entry for July 7, 2006). The optics and the scope’s many other innovative features represent a true advance over the SCT design as we’ve known it for the last decade and a half, since these telescopes underwent their last major upgrade with Meade’s introduction of the original, groundbreaking LX200 (yes, I know Celestron did goto first with the Compustar, but nobody could afford the thing).

QA issues aside, the RCX400 performs, and that’s what I care about. It doesn’t matter much whether I like this design being called “Ritchey Chrétien;” as is the case with most amateurs, I can’t even dream of affording one of the “real” R-Cs top-of-the-line scope manufacturers build. For all I care, Meade could have called their new scope a “Catadioptric Thingamajig.” Of course, not everybody feels that way.

I know some people will have a hard time working up much sympathy for Meade, “What goes around comes around,” they will say. For some, this is poetic justice for the bout of lawsuits Meade brought against Celestron. Well, maybe it is, but, in my opinion wishing for a takedown of Meade is shooting ourselves in the foot. They’ve done a genuinely good thing for us in bringing the RCX to market. As I’ve said before, this telescope has the features we’ve asked for for years at a realistic and reasonable price. Yes, calling it an R-C disturbs me in the same way many of the other inflated claims scope merchants have made over the four decades I’ve been an amateur have disturbed me— the “little-bit-pregnant” advertising of semi apochromats comes to mind. No, I don’t like it, but I do like the RCX, no matter what Meade thinks they have to call it.

UPDATE: FOR A LOOK AT THE LAWSUIT IN QUESTION, GO HERE...