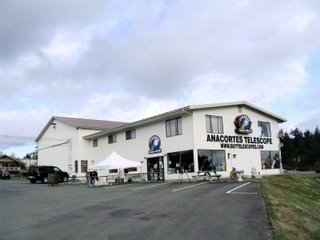 Well, not quite, but, thanks to the kindness of my fellow amateurs who've had me visit their clubs and star parties as a speaker over the last couple of years, I've covered quite a few miles back and forth across the good, ol' USA. I'd never been to the Pacific Northwest, though, not until Herb invited me up for their yearly shindig, "The Anacortes Telescope and Wild Bird 2006 Optics and Imaging Expo," that is. I'm pretty sure y'all have heard of Anacortes, since they are one of the country's premier astronomy dealers, but did you know they have a big astro-get-together each year?
This is an event the above-mentioned Herb (York), the owner, chief cook, and bottle-washer at Anacortes and also the legendary Astromart, holds every annum. It's a mini-star party, but also an equipment show that features astro-speakers and manufacturer's representatives.
What can I say other than "a good time was had by all"? Yeah, the flight from Possum Swamp to Seattle's Sea-Tac is a long one with three plane changes, but all was well when I finally arrived at the airport. I was soon picked up by Herb's son, Ray,  and taken to my nice (and very scenic) motel. Good time? Yeah, I know I had one, starting Friday night when I finally got to try some of that justly famous Seattle-area microbrewery output over a big steak with Herb, wife Paula, and several of his other guests at a joint so trendy Unk felt outa place--well, till he'd quaffed a pint. Yeah, the brew was a little different from the Dixie Beer your Uncle usually favors, but right good I'd say. Certainly didn't have a problem downing a few. 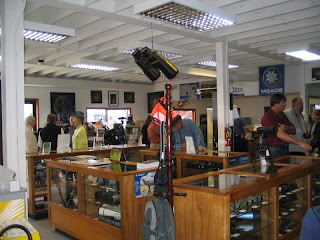 The big show was on Saturday, 30 September, and big it was with, in addition to your Silly Old Uncle, presentations from good (and very knowledgeable) folks from Takahashi, SBIG, Meade (Scott Roberts), and more. Also on-site was Paul Rodman, author of the Astroplanner software. Remember that title; I predict this new program will soon be one of the most used astronomy applications. While I felt like small potatoes in such illustrious company, the large audience who'd flooded the AT&WB premises were very kind during my (as usual) rambling presentations, which included, "The Past, Present, and Future of the SCT," "Everything You Always Wanted to Know About Deep Sky Video," and "Urban Astronomy."

One of the greatest things for me, living down here in our Astro-dealer deprived wilderness, was the opportunity to look at and fondle the latest beaufiful astro-stuff. In addition to a big, new RCX from the Meadesters, I was able to check out the beautiful scopes from Takahashi. You know, every time I get a look at those lustrous mounts and OTAs I start thinkin: "Man! That's for me! Takahashi Mewlon, here I come!" Course, a few days later I come back to reality with "Too rich for my blood." So it goes. Sigh. I reckon I do have Takahashi tastes; too bad your old Uncle has a Meade and Celestron pocketbook. 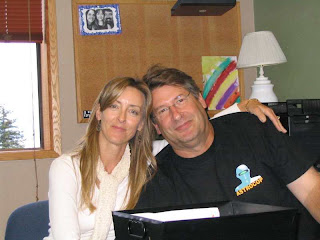 And there was more cool stuff. Like a new Maksutov Newtonian, the David Levy Comet Hunter. This 6-inch f/4.8 scope, which sports a lovely carbon-fiber tube and a high quality focuser, is indeed a thing of beauty. The example on the showroom floor had been autographed (on its tube) by David himself.
Looking at and playing with telescopes indoors scopes is cool, but using 'em on the sky is even better. Alas, 'twas not to be. The only down note Saturday was that, in typical Seattle fashion, I'm told, we went from clear, crisp, beautiful weather to damp, cloudy, and downright chilly in just a few hours. Not unlike good ol' Possum Swamp--well except for the cool part. The li'l star party that had been planned in conjunction with the local club was quickly scotched as wave after wave of clouds poured in off the Pacific.
Nevertheless, between the special deals on gear (amazing), giveaways (many), and free bar-b-que (lots), nobody left in a snit, that's fer dang sure. There's no denying that, as above, Washington is a long, long way from Possum Swamp, and that the plane rides are punishing what with today's pack-em-in-like-sardines airlines. But, dernit, it was worth it...I had such a great time that I'll go back anytime I'm invited (or figger out a way to invite myself).

Comments:
Anacortes Telescope and Wild Bird is a great place to find telescopes and other optics and the customer service is amazing. It's no wonder they have been in business for almost 20 years!

And yes, the clouds do tend to move in fast around here, no matter what time of year.