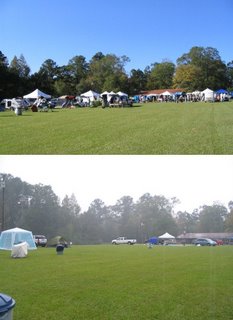 That, in a nutshell, is what happened to me this past weekend at the just ended 2006 Deep South Regional Star Gaze (Louisiana). I had high hopes for this one, too. After a summer and early fall of just about no observing (well, one really good night last month), I figured I’d hit the jackpot given the weather conditions and forecasts as Dorothy and I departed Mobile. Nope. Sorry. Fuhgeddaboutit.

As above, when Dorothy and I arrived at pretty little Camp Ruth Lee in the backwoods of Louisiana near the Mississippi border, we were excited. It was clear. Who gave a fig what the weatherman was predicting?  Now, if I'd been honest with myself, I'd have admitted that there was high, high humidity, and that there was a feel in the air of "approaching front." But surely not. We'd waited all year for the DSRSG. We had to have clear skies for at least one night. My fellow observers obviously felt the same way, since despite dire weather predictions 121 eager astronomers made tracks for Camp Ruth Lee this year.

Why am I telling you all this? Partially to vent. I go to a lot of star parties every year, but I still look forward to each and every one. I get my hopes built up, and when things don’t quite work out the way I’d planned and dreamed and hoped, sure I’m a little bummed. This one, the DSRSG, is my “home” star party too. I’ve been every year for the last fifteen years, and it’s also the first star party Miss Dorothy and I attended together shortly after we were married. It’s special and I want it to be perfect in every way (which it was last year).

Another reason I’m talking about a “failed” star party (about three hours of viewing out of four days, good buddy) is to remind you, as I noted some time back, that there’s more to a star party than “just” observing. I had a pretty good time at this year's DSRSG. I would have had a good time even if I hadn’t been able to get in those three measly hours.

I saw (and annoyed) a lot of old friends, drank a lot (ahem) of Rebel Yell, and drooled over a bunch of downright cool door prizes (but didn’t win any, natch). I had fun giving my “Urban Astronomy” presentation, and I had a great time sitting in the chow hall with my bubbas as the rain came down watching 2001: A Space Odyssey (DVD equipped laptops and LCD projectors are the savior of many a clouded-out star party these days). Yeah, Rod’s Yell-fueled running commentary on “Stanley Kubrick as auteur” probably annoyed more than a few folks, but they were too nice to say so.

Heck, I had such a good time that I wasn't even bothered by our chickee cabin. Yes, it was rustic, but in the context of my favorite star party it seemed just fine. I sense the time is coming when your old Uncle will decide to say "no" to chickies and tent camping, but that day has not come quite yet. The cabin was bearable with only one bad part. I kind of hated to disturb the spiders who make the cabins their home the 51 other weeks of the year.

Was it all gravy? No. The food has already declined since we first moved the DSRSG to Camp Ruth Lee last year. Oh, it wasn't exactly bad, but, frankly, it was maybe about the same or a mite below the fare at our former home, Mississippi's Percy Quin State Park, which wasn't exactly an epicurean delight. As I've said before, however, my requirements are "edible" and "reasonably priced" and the meals are still that. Yes, the spaghetti sauce was watery, they were stingy with it and the overcooked pasta, and there should be more to a salad that some elderly lettuce. But it was a STAR PARTY, folks.  A big plus? The Ruth Lee folks opened up a late night snack bar reminiscent of the one at the Texas Star party and sold burgers and dogs that were very good indeed.

A final reason for making note of my semi-rained out 2006 DSRSG? To caution you. El Nino is back, I hear. What does that mean? Exactly? Go ask a derned weatherman. In general terms, though, I gather it means a wet fall and winter for us down here. Prob’ly for y’all too, wherever you are in the States. If El Nino continues on for another year, as it probably will, expect a cloudy spring as well. That’s been my experience since this El Nino business materialized (seemingly) suddenly about eight years ago. Another problem for DSRSG this year was that the way the New Moon fell meant it was held relatively early in October--we always have better luck in November.

So what? So... Look forward to your star parties, local, regional, and national. Mark the days off on your calendar. Pack scopes into car and drive for that wonderful field like a madman or madwoman. Just don’t get the idea you might actually see anything. Do expect to have a great time, though, no matter what. Dern sure don't forget the Rebel Yell (or that SISSY WHISKEY you drink). You may find a bottle or three more “useful” than Naglers as you and your mates sit under an EZ-Up on a rainy field and talk the current state of amateur astronomy and WEATHER--while doin’ exactly nothin’ about either, of course.