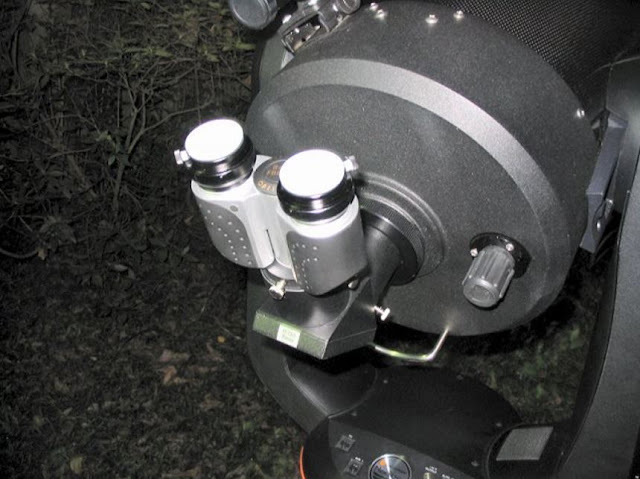 What did your old Uncle Rod think of the Bargain Basement Burgess Binoviewer (it’s alliteration day) he received a from Herb York at Anacortes for evaluation purposes, muchachos? For the 200-dollar price tag, I was fairly impressed. However, going in, I didn’t quite know what to expect. I mean, sure, we know the Mainland Chinese factories have been able to turn out some decent gear for amazing prices over the last few years. But binoviewers? In the past, the combination of “cheap” and “binoviewer” has meant “eyestrain” and “waste of time” and, generally “YUCK.”

All that in my mind, such as it is, a look at the Anacortes website revealed the specs on this thing: “Binoviewer with Bak4 Prisms with 24 mm clear aperture and broadband coatings. Dual Individual helical focusers. Threaded for filters.”

Sounded pretty good, but what would such an el-cheapo be like on an observing field? When the Burgess arrived, I was, yeah, impressed. The binoviewer does not look or feel cheap at all. The body is a nice anodized aluminum with a rubberized coating that provides a good grip for the folding binocular style body. The (non-removable) 1.25-inch nose piece is threaded for filters, and, in quite a coup for a 200 dollar unit; each eyepiece holder is equipped with a helical focuser. The overall appearance is good-looking without that cobbled together appearance so common in the less expensive binoviewers we’ve seen. The unit sports a “Burgess Optical BAK4 FBBMC” (fully broadband multicoated) nameplate.

Anything I didn’t like right off the bat? Well, from first sight and first light, I was skeptical about the method the Burgess uses to hold the eyepieces in place, noncaptive setscrews. Over and above the fact that they are more of a hassle to use in the dark than the self-centering eyepiece holders on the Denkmeiers and other top of the line binoviewers—I’m famous for dropping small set screws—this “feature” of the Burgess was to prove to be its Achilles heel in testing.

Luckily, we’ve been undergoing one of our infrequent spells of clear, cool weather down here in Possum Swamp, so I was able to get the Burgess out to my club’s suburban Pine Lake Observatory site for some deep sky testing t’other night. While this location is far from perfect light pollution-wise, it’s good enough. The Nexstar 11, the scope I’d use for the test, is capable of revealing fine detail in M76 at this location, for example.   In addition to the Nexstar 11, my setup was as follows:
What first? Can’t let M13 slide away without one more look. I got the NS11 aligned and sent it that way. I started out with the Denks. MAN...I’m still impressed by that binoviewer. It’s so comfortable to use, and just works so darned well, delivering beautiful views of the deep sky in addition to the Moon and planets. With the 25 mm Plössls, the field stop was sharp, and the field was well-illuminated to the edge. Many, many tiny stars twinkling out of the light pollution and thick air down toward the horizon.

OK...moment of truth. It was time to give the Burgess its chance. What to expect? I didn’t know. I did realize that it wasn’t very realistic to expect the Burgess to keep up with the Denkmeier. The Denk Standard’s price with no accessories is now an amazingly low $499.00, but that’s still more than twice the price of the Burgess’ $199.00.   “OK steady as she goes...25 mm Plössls in place...Denk safe on the observing table—man, this dew is HEAVY—what will it be? A dim microscope-bino head disaster?”

Nope. Not at all. YEAH, BABY! The stars of M13 looked as good in the Burgess, frankly, as they did in the Denkmeier. There was no detail I could see in the Denk that I couldn’t see in the Burgess. These relatively poor skies were probably not the ultimate test, but I was impressed by the brightness of the Burgess’ images.

So the view in the Burgess binoviewer was just as good as it was in the Denks? Well, no...    The smaller clear aperture of the Burgess produced significant vignetting with 25 mm Plössls. The field stop was fuzzy, and the field noticeably smaller. Was this fatal for the Burgess? No, not really. I noticed it most when I switched back to the Denkmeier. When I didn’t worry about it and just concentrated on enjoying the sky with the Burgess, I really didn’t notice it.

With the StarSweeper reducer in place, the field is more than generous enough to make this device useable on the deep sky with an f/10 SCT.   To use a time-honored (or worn) automotive comparison cliché, using the Denkmeier was like sitting behind the wheel of a BMW. “Turning the key,” on the Denk and roaring off into the darkness, it just seemed so solid and POWERFUL. In contrast, the Burgess was more like the family’s Ford Taurus. It started and ran well. But without that precision feel. On the other hand, one can enjoy the passing scenery just as much from the window of a proletarian Ford as you can looking out of a classy BMW.

How about shorter focal length eyepieces? The vignetting disappears at about 20 mm, and 9 mm Plössls in concert with the StarSweeper provided a good view and helped suppress the bright sky background at my light-polluted site. M15 was particularly nice with its blazing core and hordes of tiny stars.

As for the operation of the Burgess, it was in MOST ways a snap. There’s plenty of interpupillary adjustment available, and I had no trouble merging images MOST of the time. The helical focuser on each eyepiece barrel worked well and smoothly.   That “MOST” in the above paragraph relates to the Achilles’ heel mentioned earlier.

When you’re using short-barreled, short focal length eyepieces, tightening the eyepieces down using the Burgess’ setscrews tends to cock the oculars in the eyepiece holders, moving the image in the field, and UNMERGING the images in the binoviewer. Like the vignetting issue, however, I found this not to be a fatal problem for the Burgess. I did NOT like it, but was able to work around it easily enough. The setscrews on the Burgess are equipped with small plastic washers, and these help you to gently fine tune the pressure on each eyepiece. Also, since I had the NS11 setup in alt-AZ mode, meaning the binoviewer would not assume any odd positions with respect to the ground no matter where I pointed the scope, the expedient I used most often was just to leave the setscrews loose, maybe applying just a small amount of pressure. In this—or any alt-AZ scope— there won’t be any danger of the eyepieces falling out, no matter how the scope is moved.

Again, I don’t think setscrews are a good solution for any binoviewer, and if it might be possible to come up with something else without increasing the price of this unit, I’d URGE Burgess to do so. But, again, it was not a show-stopper. This image-merging problem brought on by the setscrews is most evident with higher power shorter barreled eyepieces. With the 25s, I could crank down the setscrews and not notice much of a problem.

Once I had a feel for the setscrew situation, I just sat down at the scope and ENJOYED the Burgess! M2? Scrumptious. M30? Weird and beautiful. NGC 1023? That’s a galaxy that looks good in a binoviewer! And all this goodness available at less than 200 bucks? Man, oh, man! No, this unit is NOT perfect. I had to down-check it due to the setscrews, and—a more minor issue—the somewhat constricted field, but I never thought I’d see this kind of quality in a binoviewer for this price. NEVER. I’ll be honest, when Bill Burgess announced he’d be offering a bino in the 200 buck range, I was very skeptical. Not anymore, muchachos, not anymore.