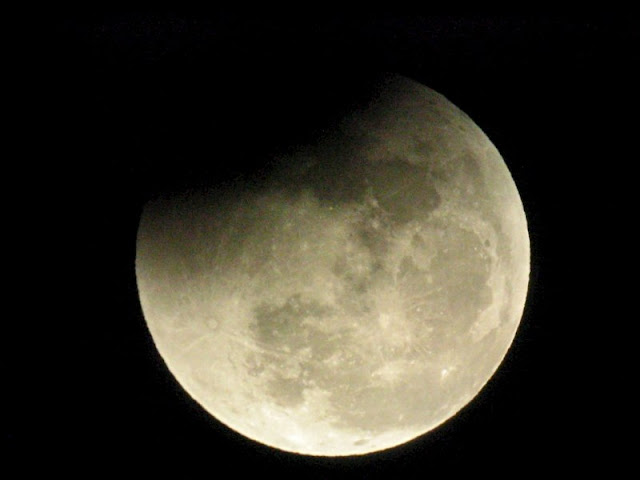 Well, muchachos, I didn’t get caught up in the minor bout of eclipse mania that swept through the amateur astronomy ranks last week. Leastways, I didn’t think I would.

Eclipse mania? Yeah, LUNAR ECLIPSE mania. After a Moon eclipse drought of several years, we were to be treated to a total one this past Saturday night, 3 March.

I’ve always been a Moon fancier, and eclipses are special for me. It was, in fact, the total Lunar eclipse of December 1964 that served to light my amateur astronomy fuse. For us veterans, a Lunar eclipse is maybe not the most exciting event on the astronomical calendar, but for a starry-eyed eleven-year-old it was something else. Not only was I seeing the sky do something in real time, I’d read up on the mechanics of the event beforehand, and the kids in my church youth group—and the adults—dutifully assembled to view this EDUCATIONAL event soon recognized me as the expert in astronomy and started asking me questions. If I had to point to a moment when I became an astronomer, that was the moment.

This eclipse, though? Sounded pretty punk. The Moon would not rise for me until totality was well underway. Might this be a public outreach opportunity? Didn’t sound like it—not much noise was being made about it in the media far as I could tell. I did get one call from the local newspaper enquiring as to whether we, The Possum Swamp Astronomical Society (PSAS), would be “doing anything" for it. “Nope,” I answered, “it won’t be much of an eclipse, and we have a public star party coming up later this month, anyway.”

Ho-hum, sounded like a real ho-hummer. Rather than sitting around planning a Lunar eclipse campaign (load up a truck full of gear and drive out to the club dark site for an unobstructed horizon), I instead loaded up Miss D, and Miss Lizbeth and we took ourselves to the annual chili cook-off in Bienville Square

Quite a bit of chili (and some beer) later, we returned to the old manse, I took a nap, and, when I awakened at about 5pm, I began to think “eclipse.” Wouldn’t be much, but I’d feel a mite guilty to miss it, I decided. Feeling a little logy, I didn’t want to mess with big scopes; the Meade ETX125, Charity Hope Valentine, and a pair of 15x70 binoculars would have to do. I did tote a laptop into the backyard, as I’m evaluating a program (Earth Centered Universe Pro) for a review, and figgered I'd kill two birdies with one stone by testing the software’s go-to capabilities with the 125 while I was outside. So…I dutifully connected ETX to PC and slewed to a few targets while waiting for the fat ol’ Moon to come up. When she did, I was surprised.

I was not overly impressed by the beauty of the eclipse as eclipses go—by the time Luna cleared trees and rooftops, totality was over—but by the fact even a run of the mill event like a minor Lunar eclipse still had the power to move me. Almost against my will, I found myself getting excited. I even ran inside and rustled up our little Canon Powershot point ‘n shoot digicam to snap the snapshot you see here (by the simple expedient of holding the little camera up to the ETX’s, Charity Hope Valentine's eyepiece).

Excited, yes. And I’m so glad. I hope never to lose the ability to forget about the nuances of SCT design, or the operational details of chilled CCD cameras, or the ins and outs of long exposure image processing, and just enjoy the simplest pleasures the night sky throws my way.

Comments:
Nice photo, we got completely skunked out by clouds at Observatory Park hear in Virginia.