Everything Old is New Again: CdC 3.0 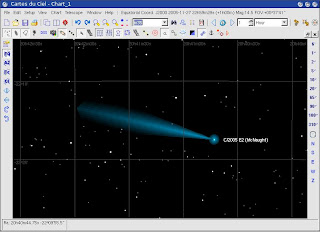 What’s everybody’s favorite freeware planetarium program? Patrick Chevalley’s Cartes du Ciel, of course. OK, I know lots of you also like that other shareware masterpiece, Hallo Northern Sky, and that new upstart, Stellarium, but CdC is still ahead in the race for the hearts and minds of amateur astronomers.

It’s easy to see why Cartes is so well-liked. It’s not just that it’s free, it’s capable and useful, containing some features that even the most expensive astronomy applications don’t boast. The ability, for example, not just to download Digitized Sky Survey Charts—almost any astroware worth its salt is Internet aware these days—but to superimpose these images on your charts. The program also boasts many and huge catalogs, runs fairly zippily on run-of-the-mill modern computers, and is—did I mention this already?—free. It’s so good I once chided Patrick for not trying to make at least a little money off it. His reply? “Rod, I’d rather see amateurs spend their money for a new eyepiece than for astronomy software.”

Yeah, CdC is great, but nothing is forever. There’s no denying Cartes, decked out in its Windows 98 finery, is starting to look a little over-the-hill. Looks ain’t everything, and you will find CdC will still do just about anything any of the most expensive and modern programs will do, but there issues. Cartes grew like Topsy from its modest initial releases into a full-featured program. As is often the case with one-man (or nearly one man) software writing operations, the code became a little less than “optimum” over the years as the features were piled-on, and that means CdC runs a little less well than it could on today’s fast machines. Then there is the fact that CdC only runs on Windows PCs. With Apple making a strong comeback and Linux installed on quite a few observatory computers, it seemed a shame Cartes was only available for the Windows machines.

So, when would Patrick grace us with a new version? If you’ve been visiting the Cartes website at least occasionally over the last several years, it didn’t seem as if he ever would. The program version has remained resolutely at v2.76 forever.

A close look at the website, however, reveals a clickable link to a new Cartes du Ciel, version 3.0, now in beta release . This new CdC is just now catching the attention of John and Jane Amateur, since development has been a little slow. In part this is probably because Patrick spent some of his spare time working on his outstanding freeware Lunar atlas program, Virtual Moon Atlas, and possibly also because Cartes du Ciel required a rework from the ground up. Developing the Linux version also undoubtedly took time too (a Mac version has been compiled, but according to Patrick there’s still a good bit of work to be done in that area). The good news? Cartes du Ciel v3.0 is fully useable in its current Windows beta .0.1.2 release.

What’s new? Other than the forthcoming ability to run on those other operating systems, the program seems to work better on my Win machines. It certainly looks better, with an updated and more modern appearance. While a few of the features of the “old” CdC aren’t working yet, there are some new ones, like multiple linked charts, that are already functional and which blaze new trails for the program. At this point, 3.0 seems pretty bug free (any remaining ones are minor), and core features, including image downloads and telescope interfacing (via ASCOM), are ready to go.

My advice? If you’re a Cartes du Ciel fan, you owe it to yourself to download 3.0 (you can continue to run 2.76 as well—a 3.0 installation will not overwrite the older version at this point). I think you’re going to like what you see. If you’re not a CdC user? Go get 3.0 and get started with the future of astronomy shareware. Prepare to be amazed at how good free astronomy software can be.

Comments:
I tried the linux version and was pleasantly surprised. Last time I tried it it was just crashed.