Is anybody surprised Meade Has Their Own Star Finder Widget? 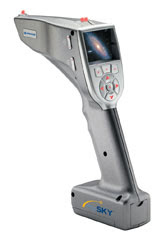 Yeah, “star finder.” Celestron calls their similar gadget, the SkyScout, a “personal planetarium,” but I think star finder is a better description, because that’s what it really does. Point it at a star, the star gets identified. Ask for a star (or one of a few deep sky objects), and SkyScout will lead you to the spot. As I wrote here some time back, tit is an interesting product; one for which I could find a few uses (given the fact that I’m an astronomy educator), but maybe not enough uses to justify its 400 buck price tag. Guess what? Meade may have changed my mind with their new, similarly priced competing product, the MySky.

Frankly, I'm surprised. Yeah, I’d expected a Meade “SkyScout,” but I expected it to be similar to the Celestron device. Just different enough to avoid another round of lawsuits. Anyway, the MySky is surprisingly different in appearance. Rather than a little box/cell phone/camcorder, the MySky looks like, well, like a cordless drill. Makes sense. A pistol-like paradigm really seems more appropriate for easy aiming than a box. Point pistol at sky. Pull trigger.

This design is especially appropriate for the MySky since there ain’t nothing to look through. Unlike the SkyScout, where you peer through a zero-power window at an illuminated reticle, the MySky uses a color video screen to guide you to objects. Yep, that’s right, a 480x234 color video display. It will even play little movies.


Criticism? Meade shoulda hired Lindsay Lohan for this video rather than using Scott Roberts. He's a nice enough fella, and does a pretty good job with his talks at star parties. But stage presence and charisma? Naw...sorry!


OK, so you’ve got a little PDA-like color computer screen. That would seem to open up possibilities. But how do you point the consarned thing with no peep hole to look through? Easy, Meade’s little pistol has sights. Fore and aft “hard sights” just like the old S&W .38 “Combat Masterpiece” Uncle Rod had to wear at the missile complexes when their were visitors onsite. The Meade's sites light up red to help you aim out in the dark. This sounds both useable and practical to me, though we’ll have to wait to see how this works out under the night sky, natch.

The other part of the MySky coolness? It appears that when you’re identifying and searching for objects the screen doesn’t just display some ho-hum pointer arrows. It actually shows a color depiction of the sky with constellation lines and all, just like the planetarium program on your PC. Like them dudes say on WTBS late at night, though, BUT THAT’S NOT ALL! Like some of the more advanced planetarium programs, the MySky appears to be possessed of images of some DSOs. This sounds much more like a genu-wine personal planetarium than just a star finder. 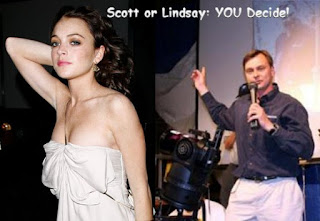 Problems? Other than the usual, “Can Meade deliver this thing on time and in working order”? Not many I can think of. Oh, some of the gang over yonder on SCT User expressed fears that the MySky would result in countless amateur astronomer deaths at the hands of police: “Hey what you boys doing out here in the dark? DROP YOUR WEAPON!” BOOM! Luckily, that doesn’t sound likely to me. Oh, I think you should use discretion, sure. If approached by police at your observing site, don’t point your MySky (or cellphone or telescope) at ‘em. But I hardly think this is gonna result in an amateur astronomer Armageddon.

Oh, there was one other “problem” when it came to the MySky, I thought, the same put-on-the-brakes dose of reality I got after thinking about buying the SkyScout. What the heck do you do with the thing other than point out a few objects to students or allow them to do so for themselves (a SkyScout equipped with a green laser would be a very nice tool for that, I’ll admit)? What else can an amateur do with this thing to make it worth 400 Georgie Washingtons?

With the SkyScout, the answer is “not much.” It is what it is. But down near the end of the list of MySky features was the information that the MySky can be connected to your Autostar-equipped Meade scope. And not just to allow you to use the gadget’s onboard GPS receiver during scope alignment for your non-GPS Meade. It’s like this: point the MySky at your object of choice. Pull the trigger. Your scope goes there. To make this practical, MySky has an onboard library of 30,000 objects (stored on an included SD card) vice 6,000 (mostly stars) on the SkyScout.

The idea of that tickles me. Especially when I think about doing this in conjunction with my ETX125. Sometimes, you see, I want more than just an Autostar hand controller with its many-button-push approach to object go-to. I could use a laptop PC, but dragging out a laptop seems to abrogate the very reason I bought the little guy: GRAB ‘N GO simplicity. With a MySky I could leave the PC (and piles of books) at home.

The only criticism I have regarding MySky’s scope control possibilities? Meade should get over themselves and make all their programs and computer doohickeys ASCOM capable. Yeah, that means somebody might
2020 Update

Comments:
I'm new to your blog and to your Yahoo group, but want you to know that I find this and your other reviews highly readable and informative. I wondered why the heck I'd want to spend $400 on a thingie to tell me what I'm looking at when I've got charts and a good scope to do that, but you gave me room for thought.
I also enjoy your style -- redneck Renaissance man(tending to emulate it in my own stuff). Keep up the good work.
Ken

Howdy Ken...thanks for the kind words, and welcome aboard the Chaos Manor South Express. ;-)

Dear Rod,
Wonderful opinion. and useful too. Given that I was about to click 'Buy' on Amazon. But do you think that a new 'Skyscout' is in the pipeline
Neel.

One area that puzzles me with MySky is that color displays can be pretty blinding, how are you supposed to see anything with that shining in your face?

They make no mention of a dim night vision mode.

I think in that respect, the Celestron unit is better though out, but Meade will likely sell more of these to the gadget minded.

I do respond to y'all--even if it's better late than never, I reckon. I don't have any inside information from Celestron, but I'm guessing they WILL soon update the Skyscount. IF the Meade doo-hickey proves to be a success...which I think it will. As for the displays, etc. on the Meade thing...I still haven't seen one in person...

I have one. Multiple levels of brightness, plus night vision red. Still haven't hooked it to my ETX90.

Lindsay Lohan? I've seen cigarette butts floating in the bottom of a finished beer bottle that look better than her.

Hmmm... I suspect you've been drinking way too much of what came out of that bottle. LOL