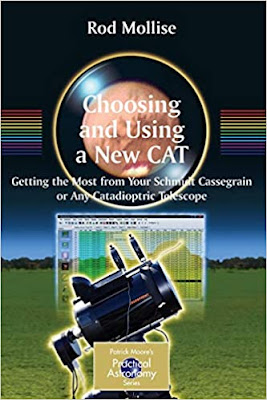 Over the last several years, hordes of fans—well, maybe an amateur or three—have asked me when I’m going to update my venerable SCT book, Choosing and Using a Schmidt Cassegrain Telescope. After all, the book, mostly written in 1999 and 2000 and published in 2001, is badly out of date. Not just in its reviews of commercial Schmidt Cassegrains and Maksutovs, but also in its take on the very nature of SCT-centric amateur astronomy. In the intervening seven years, you see, there’s been a sea change in the CAT-fancying amateur experience, muchachos.


When Choosing and Using was written, the LX200 Classic was going strong, sure, but it wasn’t unusual to see someone setup next to you on a star party field with an Orange Tube C8 or a Meade 2080 plugged into a drive corrector (you curmudgeons remember those all too well; I’ll leave you young sprouts to wonder). It was still relatively unusual to see an amateur using a laptop PC at the telescope.

In the seven – eight years since I began Choosing, things darn sure have changed. And I don’t just mean that just about everybody’s using go-to scopes. I mean the accelerating high-tech revolution that’s come to our avocation, a pursuit that used to be comfortingly changeless (Remember Jaegers, who ran the same two page ad in Sky and Telescope for at least ten years back in the 60s – 70s?).

Take a look around you. It’s not just go-to, though we’ve come far enough in that regard that the original LX200 is now considered “old-fashioned” by the young guys and gals who are, thankfully, beginning to enter the hobby again--maybe initially attracted by this high-tech stuff. It’s The Everything Else: the laptops, the scads of software, the hand-held and integrated GPS receivers, the CCD cameras, the deep sky video cams shooting images to DVD recorders, the wireless hand controllers (Meade makes a wireless Autostar II; with Celestron you use the Logitech Wireless Wingman gamepad). By God, how long will it be before somebody’s garage door opener sends a field full of telescopes a-slewing to nowhere?

Bottom line, Choosing was badly in need of updating and I told my publisher so. Their response? They agreed…BUT. Seems as in today’s book market that new editions are not a favored item in marketing departments. To put it mildly, the number-crunchers feel the same way about a new edition of an older book as they do about a rabid plague rat. The good folk at Springer – Verlag agreed on a new SCT book, but they wanted a whole new SCT book, not just a new edition.

So, I’ve started work on what I’m provisionally calling The New SCT Book (that will likely change once all is said and done).

What else will change? Glad you asked. For starters, the entire thing will be rewritten. That actually makes me pretty happy. I’m a much better writer than I was way back when (a few years of magazine deadlines will do that), so I can fix all that embarrassingly awkward prose. I can also take care of the factual mistakes I made (which I’ve kept a running list of). What else?
Anyhoo, if you have any wants, any ideas about what you’d like to see in The New SCT Book, just give me a holler. Otherwise, look for it in late 2008 (probably).

Not that long after this entry appeared, the new SCT book, titled Choosing and Using a New CAT, was published. Overall, I was happy with it. It was not the book it could and should have been, but in large part that was the fault of Springer, not me. If they'd allowed me to do what I wanted to do in the first place, produce a new and revised Second Edition of the work, I could have fixed the problems in the old book and offered plenty of new material as well. Instead, I had to write a whole new SCT book from scratch.

Oh, don't get me wrong. New CAT is OK. Certainly plenty of you liked it; it's been Springer's big amateur astronomy seller for over a decade--but it coulda-shoulda been better. The good part? Springer came to the same conclusion about a year ago. They contacted me and said, "You know, Rod, New CATs is still selling, but it's outdated. Could you do a new EDITION?" Darned right I could. So, I finally got to fix the things that bugged me about the book, which was a huge relief. When will the Second Edition come out? Look for it late summer 2020.

Comments:
still lots of people using film for astrophotography, so don't cut that section out just yet :)

Sign me up! I loved the first book and have read it many times,when the cloud gods are angry.
I can't wait, I love to read about the most successfull mass produced telescope the world has ever seen.
Can you please do a little research and find out when and if NASA ever did take a C5 into space.
We have all heard about it, but no one really seems to know when it went up, and what it was used for.
Thanks, and keep up all the great writing.
Steve Whitehouse
Vancouver B.C.

Thanks for the kind words. As for the C5, I believe you're right. At least that's what one of my few remainin' brain cells tell me. I will check it out, however. ;-)

There's a lot of copy concerning the C5 and NASA...ad copy. I did find this on Celestron's site, and they are usually pretty reliable:

Throughout the world, Celestron telescopes have become the “telescope of choice” for the consumer that can differentiate between brands. Major colleges and universities worldwide use Celestron telescopes in their astronomy programs. Moreover, its solid and esteemed reputation in the scientific community has reached NASA, who selected Celestron’s C5 telescope as the telescope to be taken on several space shuttle research missions.

I'll keep looking around at NASA's sites, however...