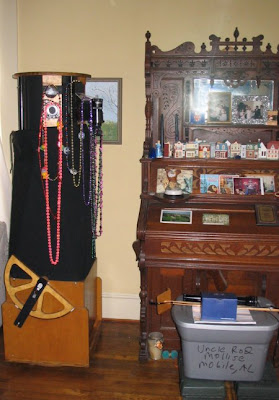 I really wanted it to work, muchachos, but I’m afraid it didn’t. Not quite. I’m not talking about my newly restored 12.5-inch truss tube Dobsonian; actually she's been working great. No, what I mean by “work” is me rejoining the ranks of the Dob fans at least on a part-time basis.

Sometimes I do long for that simpler wood and glass side of astronomical life. I spent some time as a member of the dobbie brigade more than a decade ago, but  it seems that short infatuation was a fluke. An aberration. Something not to be recreated. Thomas Wolfe was not an amateur astronomer as far as I know, but he had the telescope game pegged: "You can’t go home again."


As you can see in the picture, Rod’s dob is back in her usual spot in Chaos Manor South's front parlor, bedecked with her usual Mardi Gras beads. All is as it was before I undertook this exercise in nostalgia. Well, not quite: this telescope is way better than ever. ATM Pat Rochford did a good job bringing an old puppy back to life. Among other things, Pat redid the side bearings and installed a set of encoders for the Sky Commander computer. Old Betsy looks great, and I was hoping for a really great “second light” experience. I’d taken first light with this “new” scope a few weeks ago at Pat’s observatory, but yesterday evening was my first opportunity to get her out to a dark site.

Dark our club site is. Or at least relatively dark. Unfortunately, it wasn’t very clear last night. Oh, there weren’t any threatening clouds moving in, surprisingly, given the normal facts of life regarding late spring weather down here on the Gulf Coast. It was hazy, however. Transparency woes meant conditions were slightly better than at Pat’s Stargate Observatory, but not overwhelmingly better. It was also, amazingly, cold. Low 60s in May? In Mobile? Go figger. I always knew them H-bomb tests back in the 50s would catch up with us one day.

Despite these hazy, humid skies, Old Betsy performed as well as any 12-inch would on a semi-punk evening. There were no surprises. Well, actually there was one. Your Old Uncle has forgotten how to collimate a Newtonian. I spent about 15 minutes chasing that blamed paper-reinforcer doughnut before Pat came to my aid.

When the scope was ready, though, she performed like the champ she has always been. Better. As on the last outing, the Sky Commander DSCs were dead-on from one side of the sky to the other, often putting targets in the field of a 7mm eyepiece. It also seemed pretty obvious that my optical upgrades—better coatings and a smaller diagonal—had made a difference too. Stars seemed tighter, Jupiter seemed slightly more detailed, and globulars seemed to have more snap than I remembered.

And yet…and yet. I found myself vaguely let-down at the end of the run. For two reasons, maybe. First, as the years have rolled on, I’ve become more interested in imaging and less in visual observing. My eyesight is still pretty good (except for my near vision), but visual work is simply not what I’m most interested in at the moment. The whole time I was chasing little galaxies in Ursa Major (and having quite a lot of success, I might add), I’ll admit I was thinking, “Man, if I had my Stellacam I’d really be seeing something!” Then there's the “souvenir factor.” Back at home, I didn’t have any still images or video sequences to pour over, process, and enjoy—I felt robbed.

There’s also, and I won’t deny this either, the comfort factor. Old Betsy, an f/5, is short for a 12.5-inch Newtonian, but I still spent quite a lot of time standing on my feet while observing, and naturally had to get up every time I wanted to go to a new target. With my SCTs, I can do all my observing while seated. Yeah, I might sometimes have to get up to move my chair when I slew to a new object, but I don’t have to stand there moving the dadgummed scope across the sky and squinting at a faint, small DSC display.

Tracking is a big deal, too. I don’t remember being annoyed or distracted years ago when I was nudging dobs along, but I sure was last night. I could get used to the nudge-nudge – squint-squint thang again, I suppose, but I don’t think I want to.

So what’s in store for the dob? Another six years of vegetating in a corner? Nah. There is one thing that will encourage my occasional dob use. There are nights when I want some horsepower, but don’t want to spend much time setting up and tearing down. I will say there is not that much difference time and difficulty-wise in the setup and takedown for the NS11 and the 12.5, but there is some. With no batteries, no cables, no computers, no handcontrollers—no doo-dads—to worry about, I can get the dob apart and tossed in the Camry quickly. On those nights, perhaps, Old Betsy will receive her ration of starlight. I won’t feel guilty if Dob nights don’t come often, though. You can’t go home again. Or maybe, now that I think about it, I am home—in SCT land. It feels good.