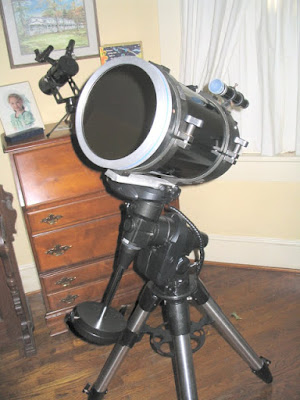 Comments:
Gawd I Wish I had Da Money!Until then,well I'll be forked dead in da -ss!!!!

Sorry for the repeat!

I really love your writings Uncle Rod!!! Always cool to read texts from you. Still laughting about "forkectomy"!!!!
100% Aggree with you for the GEM: I have a Vixen GP with my C8 and it's fine!!! I just put the mount/tripod on the right shoulder, the OTA bag in the left hand, the accessories back-pack on my back and I'm ready to walk 200m to the darkside of my building "public" garden! With a forksystem I would have to do 2 trips and let some expensive stuff outside.....

Hey Uncle Rod, you convinced me to get a GEM mounted SCT in the future. I now realised that with a GEM, the whole assembly has a higher portability comparing to the fork mounted assembly. Do you find polar alignment time taking?

No, I really don't. Not with the Celestron GEMs, anyway. Aim the mount roughly at Polaris, do a normal go-to alignment, hit "polar align" in "utilities" menu, and the scope slews to where it thinks Polaris should be given a good polar alignment. You then use the mount altitude and azimuth controls to center Polaris in the eyepiece. The resulting alignment is good enough for all the CCD imaging I want to do (at short focal lengths, anyway).

Only drawback? Once you complete the polar align procedure, you do have to re-do your go-to alignment (you've moved the mount), but that's not a huge pain...

I love my GEM (MI-250), but I will more likely always keep my first scope that I purchased after 30 years away from the hobby. My Celestron N8GPS sets up in 5 minutes for alt-az viewing. This is THE scope that I drag out for public star parties. It always puts the eyepiece in accessible locations. A kitchen stool accomodates children or adults. It will always have sentimental value for being the first scope I used to get hooked on my passion, astrophotography.

I have a quesiton or two that may be helpful for me and others.

How about side by side vs. piggyback mounting of an SCT and Small refractor? Which do you prefer and why? What are the pros and cons of both approaches?

What's the setup time compared to a "modern" fork mount like the Celestron CPC series for visual?

The dollars involved in *really* getting into photography are frightening. :)