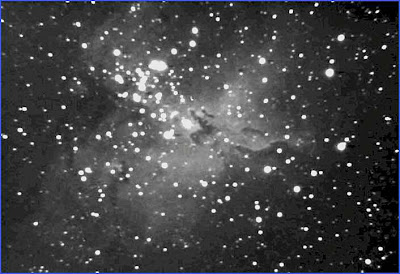 Comments:
Hi "Uncle"....I just have to chuckle at that because we've never met. Regardless, I've become an avid reader of your blog. Myself and my bud are currently constructing a roll-off roof observatory to house two scopes. I've never before given much attention to astro-video applications, but after reading this blog-post I've got to say you've got me jazzed!!!! We're gonna form a new astronomy club with the completion of the observatory with one of our primaary goals of teaching the local kiddies about astronomy. Astro-video sounds like a great way to go! May I take this opportunity to make an invitation to you to visit us in south-central Montana sometime in the future. You can access my 'intro' web page for my e-mail address. Thanks for all you do for the amateur astronomy community.....

Let me second David's invite. Montana boasts "Big Sky Country" and it ain't lyin'. Add to that, we have clear DARK skies the likes of which I only dreamt 'til I got here.

Also, your contribution to me personally, in the pursuit of our avocation, has earned my unconditional and eternal gratitude. You have been and are my beacon. Thank you, so much.

PS...I sure would like to hear any comments you may have or will have on Starizona's HyperCam.

I'd sure like to visit Montana? I'm sure y'all must have a great star party...why not have me up as your speaker some time?

Yep, must be the Starizona HyperStar thingie. Brings a F/10 SCT down to a F/2, so we're in Schmidt camera country here. 'preciate any input you may have or get.

Outstanding idea! David and I are back-country astrobuffs. Let us see what we can do with your suggestion. Maybe the Billings bunch (city fellers) would be the right venue for such a thing. Be a pleasure to meet and hang with you. Back to you on this...

I have considered the Hyperstar a time or two...and my still pick one up for the C11. Why haven't I don't so already? I'm stingy. The Hyperstar is purty expensive, and I do pretty well with my Meade 3.3 reducer. Still...like I said, I think about the H-star.

Do ya suppose Starizona would be open to sending you one for the C11 for evaluation and an article? Well, do ya? You need no introduction. Seems to me your prominance (notoriety?:-)given your following and experience would be right attractive to them. And, quite selfishly, I'd sure like to know what you thought of it.

I have a C8 which might be just the thing combined with MallinCam/StellaCam/Hyperstar, one of 'em, ought to do what I'd enjoy the most. I'd just like to make that choice based on a clear notion of the relative merits.

Rod,if I've given offense, I apologise, that was certainly not my intent. My intent was to encourage you to evaluate the Hyperstar. My wish is entirely sincere.

very good article as usual, you were right for the ethos (just tried the 17mm with my C14, amazing) and my feeling is that you are right for the video too after I saw the pictures from your web site.

I realized recently that I m gonna have problems with an old eye surgery and eyepieces are gonna become a problem for me, I know now that I will endup at some point in my life with video as a very good alternative.