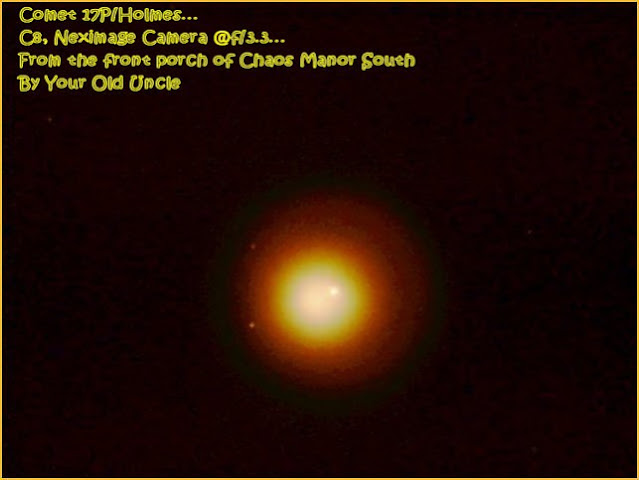 Despite the presence of a Big Ol' Moon, I was determined to get a shot of Holmes, muchachos. Since he is invisible from the backyard (the storied edifice of Chaos Manor South is in the way), I set up the C8 (on the CG5 ASGT) on the front porch. Sighted Polaris through the polar bore, cranked up NexRemote, told it "Quick Align," and I was rolling.

I figgered the best and easiest way to capture this little guy would be with a webcam, specifically with my oft-used and convenient Celestron NexImage "planetary" camera. For comfort's sake, I placed the laptop in Chaos Manor South's front hallway, ran the cables out the door, and plunked myself down in the company of a curious cat or two. Didn't expect me to stay outside didja? Man alive, it musta been down in the 50s!

First complication? My Logitech Wireless Wingman gamepad, which I use in concert with NexRemote as a hand paddle, decided its batteries were on their last legs, and I knew there were no double As in the house. I managed to wring their last milli-milliamp from 'em by the expedient of much button mashing and cussing. Second complication? The comet was awful dim with the NexImage camera, even with the gain and brightness at their maximums and shutter at its longest setting. In went an f/6.3 reducer. Uh-uh. F/3.3...? Ahhh... Before the sprite disappeared into a tree limb, I was able to get several .avi sequences, which came out looking purty good after the Registax treatment.


I did take a look or two through an eyepiece, and my general impression was that the thing seemed a little larger and a little dimmer than it had on the two previous evenings. That could, however, simply be due to me using larger aperture and (much) higher magnification than before—in the 15x70s he looked about the same. Tonight? I dunno. I'll be headed for the shipyard at 4 blasted 30 in the a.m., so I probably won't get more ambitious than dragging out the StarBlast. I'll let y'all know...