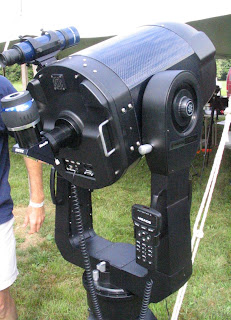 I hope so. That is, I hope Meade has reached its low ebb and is shortly going to be on its way to a comeback. You hear a lot of people carping about Meade for one thing or another, be it product quality, customer service, or whatever. To some extent that criticism has been justified. Meade should have paid more attention to its QA and should have been more responsive to customer needs. There’s no denying, however, that John Diebel’s “little company” has been a leader in astronomy products, and leaders always take flack.

Meade in trouble? What the h-e-double-L is your Silly Ol’ Uncle talking about now? If’n you don’t follow such things closely, let me fill you in. If you’re a Big Blue fan, mebbe you’d better sit down first, though.

There’d been concern developing about Meade’s financial health over at least the last year. That seemed to come to a head last summer when it became obvious—to folks in the biz, anyway—that Meade was operating its California plant on a skeleton crew. It also became apparent that Meade had stopped shipping its RCX400 scopes. Not only had the flashy ads for these innovative scopes disappeared, the scopes themselves, save for some being shipped from inventory, were gone. The fork-mount 16 RCX? Don’t even ask. Mostly this was just rumor passed around amongst the amateur astronomy chattering classes--writers, vendors, manufacturers—you know, the usual suspects.

Mostly that was rumor, yeah, until word got around the larger amateur community recently about a Meade conference call posted on the Net and about a written statement also found online. The gist of this information?

—Meade RCX production was halted to correct engineering deficiencies.—The company is still posting losses.—Layoffs have taken place and will continue.—All Production will be moved offshore as soon as possible.—The company is considering/beginning the process of looking for a buyer.
Shocked? You prob’ly are. Fearful that this wonderful source of gear will go away? Or that support for your Meade scope is going to dry up? I wouldn’t worry too much about that. Meade’s name, despite the travails of the last couple of years, is still worth a lot. Even if worse comes to worst and the company is sold, you can bet “Meade” will continue on in some form. All their product lines might not survive, of course, but I would bet support for existing owners will continue—and might even improve.

Worst case scenario? Somebody buys the company just for its Bresser (Europe), Simmons (binoculars and rifle scopes), and Wal-Mart (department store junk-o-scopes) components and is not interested in keeping the “Advanced Products” (amateur scopes and other gear) going. Even in that case, it’s likely Meade amateur scopes would survive, since the breaker-upper would probably want to sell that end of the biz to a third party ASAP.

Make no mistake about it, I’m rooting for Meade. I’ve used and loved their products for several decades. And I still don’t have the RCX of my dreams. They have GOT to survive so Unk’s gigantic aplantic SCT dreams can be fulfilled

On Monday, October 22, Herb York of Anacortes posted an "ad" on Astromart containing a Meade letter to their dealers. This letter has since been removed at Meade's request ("Other dealers complained," said Meade), though, strangely, it was openly available on one of the company's (Meade's) web pages for all to see for a couple of days. Apparently they finally got wind of this and decided MAYBE there's something to that "password" bidness.
The gist of it? The RCX 400 is not going to be reintroduced in a few weeks as implied in the conference call; instead it is going to be unavailable for an "indefinite" period. Larger scopes like the 14-inch R will be back in "the second half of 2008" (except the 14-inch OTA sans mount, which will apparently not be available at all—"suspended indefinitely"). Many of Coronado's scopes including the calcium K scopes are outright discontinued. The Max Mount and the 16 and 20-inch RCX OTAs are apparently gone too.

Meade implies that the "temporarily suspended" products like the large R scopes (not the "indefinitely suspended" scopes like the RCXes) will be back after they finish "moving" their manufacturing facilities. One has to wonder, however, why they couldn't keep manufacturing while the move was made, ensuring continuing product availability for Christmas. Finally, their stock is now going for about $1.43 a share, not a good sign, in my opinion.

STILL...I'm still hoping, and have both my fingers and toes crossed for good, old Blue.
# posted by Rod Mollise @ 1:10 PM

Comments:
As both an amateur astronomer and investor I read Meade's quarterly financial statement, press releases and teleconference with great interest. It's very apparent that the company is in a world of hurt and the major shareholders--there is one in particular--made a strategic error by acquiring a lot of stock over the last year that is now greatly decreased in value. This shareholder is on the board and is leading the new push to sell the company, or at least a part of it.
Based on the performance indicated in the financials, I would guess we would see some action by the end of the year or early 2008. They are burning through their cash, have a lot of liabilities and unsold inventory. The big question, as you note in your blog, is what will happen with the advanced product area--this is where they have taken a hit in sales as well as quality/engineering issues. Right now the whole company is only worth a few tens of millions of dollars which means portions could be had cheap. Is there enough of a market for the high end, with all of its technical intricacies and investment needs, to attract a buyer for these products specifically? Since there is apparent value in the Bresser and Simmons and low end scope lines these will likely form the basis of a sale with the high end scopes being spun off, perhaps to a Chinese or Japanese/Korean company and significantly downsized and restructured. I would bet on this, based on what I read and heard. The big question will be the commitment the new owners will have to the advanced products.

Yeah, Kent, that's the 64 thousand dollar question. Who will want the Advanced Products?

If Meade has too much inventory it may intend to float by on that during the Christmas season. I'm also sure there are other changes that are not as readily apparent (such as customer service, warranty repair, etc). I think these changes affect the average Meade customer much more than having the RCX scopes delayed or discontinued. If Meade went away, god forbid, we'd have to buy from Celestron! I'm sure there are many of us that don't want that to happen!

I was there for HOTS earlier this month. We toured the factory and yes there was some work still being done. My only question is, if the only facility that makes the corrector plates is in Irvine, then are they losing the advanced scopes? A new facility was announced for Mexico. It's been there for a while. That's where they were sending the scopes to be serviced. It's in Ensenada Mexico. All the scopes with a corrector plates were made in Irvine. Until the cost conscious stop driving the economy we will lose more companies. Sorry about the rant but that is the biggest complaint I hear from customers.

Don't forget that other states in the US would make good locations for Meade to move to (Arizona and Nevada being two primary locations). California is VERY, VERY hostile to businesses now and very expensive to meet government regulations on everything from chemicals used to how many layers the toilet paper in the bathroom has (damn unions!!). There is the idea in the California legislature that corporations are evil, likely due to so many environmentalists getting elected over the last 30 or so years. The advanced optics might STILL end up being "Made in USA" as they are now.

Uncle Rod, are we still able to buy LX200R OTA?

According to Meade, the R OTAs should be/become avaialable again. EXCEPT THE 14. Don't ask me why that is. ;-)