Do You Know About ATT? 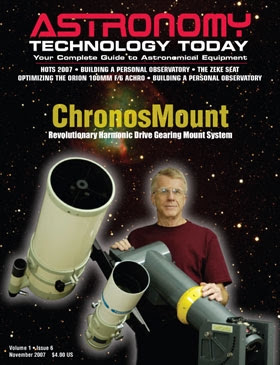 No, I ain't talkin’ about Unk’s vaunted AEGIS Test Team; I’m talking about a new amateur astronomy magazine, Astronomy Technology Today. This publication, now in its sixth issue, is the most vibrant and interesting mag to hit astronomy in many a Moon.


That said, when I heard about Publisher Stuart Parkerson and Editor Gary Parkerson's plans to bring-out an amateur astronomy publication focused entirely on equipment, I thought they wuz NUTS. It’s hard enough to get any magazine off the ground these days—witness the recent demise of Skypub’s much-loved Night Sky—but one focused on such an esoteric subject? FUHGEDDABOUTIT! It would be sure to fail. Wouldn’t it?

That’s what I thought initially, but a little cogitating brought me 'round to “just might work.” A small, subscriber-only magazine about our beloved astro-stuff might make it, I decided. And it might not even have to remain small for very long. C’mon, admit it: if you’re like Uncle Rod, you mostly read Sky & Telescope and Astronomy for the gear reviews and ads. I do enjoy the observing articles, and especially Sue French’s outstanding "Deep Sky Wonders" column, but I really don’t need all the astronomy news and theory/fact articles. The news is much better delivered by the Internet, and there are plenty of sources including the I-net and many professional and amateur journals that do a good job with the theory. Yep, a gear lover’s digest just might work.

What did I imagine ATT would be like? Well, I figgered Mr. Gary would start simple. Maybe with something like Tom Clark’s Amateur Astronomy Magazine—you know, black and white, a few ads, articles cut and pasted from newsletters and other amateur sources.

Surprise! Even in its first issue, ATT impressed. There was plenty of color, plenty of advertisements, and plenty of articles written specifically for the magazine by talented authors. Only one thing gave pause: the magazine looked almost too good. Were S.P. and G.P. biting off more than they could chew (anybody but me remember the Deep Sky Journal debacle?)? The magazine looked as good as many newsstand publications, and other than a nod to the gods of economics with the use of pulp paper rather than slick paper, ATT didn’t seem much of step down from any of the other astro-rags. Could Gary keep up this level of quality and keep the mag afloat?

Apparently so. Six solid issues have gone out the door since ATT first hit my mail-slot, and it is going strong as witnessed by the excellent November issue. The only fly-in-the-possum fat seems to be occasional distribution problems, but I’m hoping Gary will get this sorted out in short order. Some folks have commented that there’s some manufacturer and dealer fluff onboard. I honestly don’t see too much of that. Even if there is some, there are plenty of hard-hitting reviews in every single issue to more than balance the occasional “press release” stuff.

Anyhoo, let me just say this: if you’re a practicing amateur, you owe it to yourself to get over to the ATT website and order yourself a subscription (for an amazingly modest amount). Don’t ask questions; just do it. Uncle Rod says so.

Did you know ATT is still with us? It is, just not as a print magazine. It's now electronic only. What was the reason for that? There were no doubt several. Main one, I'd guess? Like Amateur Astronomy Magazine, ATT survived mostly on free contributions from writers. At first and for a while you can get some copy from the top names who are looking to get onboard with a new publication that will (they hope) eventually move to being able to pay a decent rate. If that never happens, you will be left with amateur writers and material that's mostly just manufacturers' publicity releases.

Now, you can get some good free stuff from talented new astro-writers on the way up, but most of what you receive is going to be the same "quality" as what is printed in astronomy club newsletters. Manufacturers' data on new products? That can be OK sometimes, but readers can get that from websites, so why bother with the magazine?

Be all that as it may be, Gary is to be commended for keeping his magazine alive. It's still out there when some far more grandiose astronomy endeavors are fading memories.