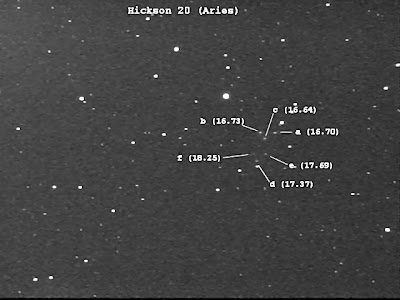 Do you know the Messiers better than you do some members of your own family? Have you looked at the “best of the NGC” so many times you’re ready to barf? If so, muchachos, you’re probably searching around for that next big challenge in amateur astronomy and are likely gravitating toward some exotic lists and catalogs: The Arps, The Herschels, The Hicksons.
The Hicksons, a listing of 100 compact galaxy groups put together by Canadian (professional) astronomer Paul Hickson, in particular holds a whole lot of attraction for the "Advanced Amateur" (whatever that is). These small galaxy groups can be attractive, but, more than that, they are probably the most daunting objects the average Joe or Jane amateur will hunt. I mean, Kats ‘n Kittens, Stephan’s Quintet is one of the BRIGHTER Hicksons.


Yup, dim alright. Teeny-tiny-small and dim, with many lurking in constellations most of us don’t visit often—like Aries and Cetus. I’d tried to slowly and cautiously approach the Hicksons a time or two, and had a modicum of success (mostly from the very cooperative skies of Prude Ranch and the TSP with my 12-inch dobbie). I soon concluded, however, that doing all the Hicksons from superior if not perfect sites, or a decent number from my local haunts would require something on the order of a 30-inch telescope.

Now, I’ve had aperture fever a time or two, but the realities of the situation given my urban digs and my schedule meant and means a 30-inch dob—or even a 20 or 25—has never seemed overly practical. Invest all that cash in something I’m likely to really get out and use a handful of times a year? I’m not over-fond of the idea of letting a telescope dictate my choice of vehicle, either. No Hicksons for me, then, right?

Wrong. The fact is, with today’s galloping technology you can now see just about anything you want in near real time with a 10 – 14-inch SCT. Probably better than one of the Dob Kings in your local club can see it. I’m talking about deep sky video of course. While you can no doubt image every last Hickson with a run of the mill CCD camera, you won’t see much until you process your images at home, and it will take you a long time to image and process ‘em all. The Main Thing, though, for those of us raised on visual astronomy, is that the video put out by Stellacams and Mallincams makes for a much more “real” observing experience then fiddling with a CCD rig and Adobe Photoshop.

I’d long heard the same mantra many of you probably have heard from the astro-video mavens: Deep Sky Video Cameras Multiply Your Scope’s Aperture Three Times. Yeah, I had heard that, but wasn’t sure I believed it. An 11-inch becomes a 33-inch? Come on! I’ve owned a Stellacam II for a couple of years now, but until recently I hadn’t got around to putting this aphorism the test. Mostly I’ve used my Stellacam II to show-off the bright DSOs to the public ("That ain't no custard pie, sonny, that's M51!"), and to make something-anything visible from badly compromised urban sites. I did get a taste of what the camera could do last winter when I used it with my C11 from our club’s good—but hardly perfect—site to show B33, The Horsehead Nebula, to my friends.

That in mind, I decided to see just how far I could push the thing at the 2007 Deep South Regional Star Gaze, our local Alabama-Louisiana-Mississippi star Party. And what better place to push than with the Hicksons? At this time of year, late fall, many of the groups scattered through Pegasus, Pisces, and the other autumn constellations would be very well placed for inspection with my good, ol’ NS11 and the Stellacam.

‘Course before going on a trip to these very distant shores, travelers need a guidebook. As the popularity of Hickson chasing has increased, some nice observing guides have appeared. One of the best looking ones being Alvin Huey’s The Hickson Group Observer’s Guide. Y’all know how cheap Your Old Uncle is, though, so you won’t be surprised to learn that I gravitated instead to a FREE offering from Reiner Vogel. It’s not filled with observing notes, but does have what I mostly wanted: POSS plate finder charts and stats on each group’s members.

NS11 set up? Check! NexRemote running? Uh-huh! DVD recorder lit-off? Yup! Monitor and laptop fired-up? Aye Keptin! Rod’s tent canopy on the DSRSG observing field was indeed begining to look a lot like a starship bridge with all that gear, and soon it was time to set the controls of the good ship for the great and distant Out There. I’ll admit I did that with a bit of trepidation. Conditions were good but not great with occasional clouds and haze. Nevertheless, I took a quick look around and punched Hickson 20 into NexRemote. “Acquiring target,” said the scope computer in her androgynously sexy voice, “TARGET ACQUIRED!”

Squinting at my monitor and using the POSS plate  for H20 on the laptop as a reference didn’t reveal much at first. But a little fiddling with the Stellacam’s gain and contrast soon changed that. “There’s one. Yeaaah…hey, there’s another. And another. Shoot…six li’l galaxies in a dime-sized area of the monitor!” I was convinced, amazed even, and kept the warp drives cranking until my batteries (and me) began to tire and a ground fog moved in at about 2 a.m. All told, over the course of about four hours I captured some 35 Hicksons to DVD.

Examining the video at home after the star party was over revealed the Stellacam would show up purty much anything visible on the POSS plates. When the seeing cooperated, the video images actually looked a lot like those vaunted glass plates.

That’s not the whole story. Lots of folks would like to see Real Dim Stuff like this, but they don’t want to give up the visual experience. How did observing with a monitor compare to observing with an eyepiece? Frankly, the next morning my memories seemed a lot like what I’d have had from a night at the ocular. I tended to forget about humming DVD recorders and chatty computers and just recalled what I saw in near real time (the Stellacam II integrates for about 10 seconds at a whack): “Oh, yeah, that group had the big one that showed spiral arms…the one after that was a string of little-bitties between two bright stars,” and so on.

I’m convinced: if you want to see the dim stuff, forget the el Monstro dobs. You can see anything and everything and see it as well or better with a friendly and inexpensive 10 – 14-inch CAT. On the other hand, if you could glom onto a 30-inch dobsonian with tracking and hook a color Mallincam to her…well…
# posted by Rod Mollise @ 3:36 PM