The Big Blow Up? 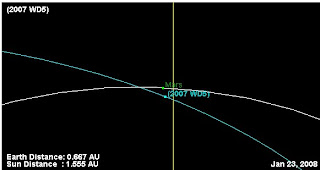 Those of y'all who've been in the astro-game for a while well-remember the excitement of the summer of 1994. You don't? Well that was when comet SL9 slammed into Jupiter as we amateurs watched. Your ol' Uncle, being a pessimistic sort when it comes to Sky Spectaculars, like many old time amateurs (some of us are still smarting over Comet Kahoutek), was skeptical, but for once one shore panned out with those weird and wonderful cometary zits spreading across Jupe's face in full view of Unk's C8. Course, events like Shoemaker-Levy don't come around often. Usually it's "one to an astronomer-customer per lifetime." But, believe it or not, there may be a chance--CHANCE, I repeat--of well, a repeat; this time at Mars, if not in such a spectacular fashion.


Seems a little piece of Solar System flotsam, an asteroid bearing the nondescript name of "2007 WD5" appears to be on a collision course with the Angry Red planet. Leastways the odds at this time are about 1 in 75 of a hit on 30 January 2008. The little feller in question, who was discovered by the Catalina Sky Survey as part of the Spaceguard project, is an unimpressive 50 - 100 meters across, it's believed. At an orbital speed of dang near 28,000 miles per hour, though, he will make a right impressive boom if he smacks into the Red One. That is, a multi-megaton boom, maybe something on the order of 3 megatons or more.


Now, that sounds like a lot, but, remember, 3 megatons is small potatoes in the cosmic scheme of things, and is even small compared to some of the H-bombs tested in the atmosphere back in the Cold War glory days. Tsar Bomba, for example, which the Russkies lit off on Novaya Zemlya in 1961 at a yield (at REDUCED power) of 50 megatons.


Bottom line? Hubble might get a look. It's conceivable large earth bound scopes might see something. It's barely possible amateur class instruments might show something to CCD eyes. Be prepared for complete disappointment, however; it's likely the odds will go UP rather than DOWN as more data comes in and this Pebble in Space's orbit is refined. If the thing does hit Mars, however, amateurs will have a job to do, even if we cain't see nuttin'. As a matter of fact, we'll have work to do leading up to January 30 no matter what happens.


Our main job will be dealing with all the questions that will come our way from the public, and the boost in interest in amateur astronomy (and scope sales) that will result. That in mind, I urge you to educate yourself about 2007 WD5 NOW. A good place to start is at JPL. Wanna look at a cool animated orbital plot? Go here. Above all, be braced, as usual, for the Loony "theories" that will circulate to your lay friends via email: "ASTEROID TO KNOCK MARS OUT OF ORBIT AND ONTO A COLLISION PATH FOR EARTH! WE ARE DOOMED! GOVERNMENT HIDING TRUTH!" Be ready in your best amateur fashion to explain the truth of things in a non-threatening, non-patronizing way. We don't want to get caught flat-footed as we have been with several similar events and non-events—like the aforementioned Comet Watergate of Kahoutek!