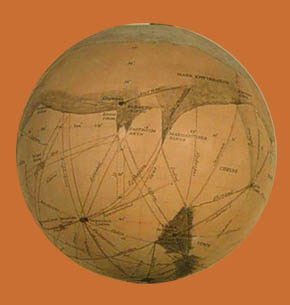 Darnit. It looks like the odds of an impact on the Red Planet by the wee asteroid 2007 WD5 are now effectively zero. According the good Bubbas and Bubbettes at the Jet Propulsion Laboratory, the chances of such a thing are currently at a depressing 1 in 10,000.


Yeah, I know some members of the vaunted tin-foil hat brigade will prob'ly start going on about "GUBMINT CONSPIRACIES. Bad, ol' NASA is HIDING SOMETHING FROM THE PUBLIC." Those of us in the astronomy game, however, have come to expect this sort of change. When the final destination of a little piece of space flotsam like WD5 is considered, typically the chances of an impact initially skyrocket and then, as the time for the presumed impact approaches and the orbit is further refined (remember, this object was only discovered in November), PLUMMET.

UPDATE: I hate to say "I told ya so," but it was barely 24 hours before this erudite post appeared on that formerly great and now debased astro-group, s.a.a.:

"TO (sic) BAD I AM RIGHT : this is not fun the new orbit when this hit Misses MARS make my first post true sucks to be right it will not just zoom by Mars as they clain it will get new orbit when it zooms by Mars gravity will send it to us what at great idea Thanks Nasa sorry still wonder when they will tell us that the WD5 in 2007wd5 stands for WORLD DESTORYER 5."


Be that as it may, I'm relieved to hear those alluring six armed Martian Princesses will not have to flee for their lives. As for us amateurs? This would not have been a big show anyway. If it were detectable in our instruments with the aid of CCD cameras, it would have been "just barely." Mighta got some interesting pix from HST or Mars spacecraft...but... Well, that's the way astronomy is pardners. A game for the patient and for those not dissuaded by disappointment (which, it appears will be my lot this weekend, as the weather dudes are predicting plenty of clouds for Possum Swamp).