Me and Mr. Norton 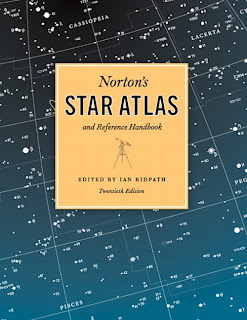 "How old are you Uncle Rod?"


"I’m so old my copy of Norton’s Star Atlas uses Herschel Numbers instead of NGCs!"

Well, maybe I exaggerate—a little—but some of the DSOs in my 15th Edition (1964) of good, old, Norton’s Star Atlas and Reference Handbook do indeed bear Herschel numbers (you know, like H.IV.37) rather then NGC designations. What got me started thinking about this little book, which was once a huge fixture of amateur (and even professional) astronomy again? A trip to my local Books-a-Million outlet, which had stacks of the 20th edition (2004) for a wonderful—or depressing—$4.97.

Norton’s and ol’ Unk go way back together. To a summer afternoon in the mid 1960s when I mailed off my $4.50 to Edmund Scientific for my first copy of this hallowed star atlas. Having exhausted the capabilities of the monthly charts found in Sky & Telescope and the teeny-tiny maps in The New Handbook of the Heavens over the first year-and-a-half of my amateur astronomy career, I was looking forward to real charts that would lead me to the countless deep sky wonders I craved.

Why did I wait over a year to invest in a magnitude 6 star atlas that cost less than one Abe Lincoln? Well, youngsters, $4.50 wasn’t easy to come up with way back when. In today’s dollars that’s about $30.00, which may be easy enough for today’s Little Folk to pony-up, but was not so easy for young Uncle Rod when his only source of income was mowing lawns (and I had to allow for other important necessities, like my monthly copy of The Fantastic Four's magazine). Nevertheless, by the time July was waning, my cash was ready to go. I still remember how surprised Mama was that I’d spent that money I’d “worked so hard for” for “a crazy book” rather than one of the slot cars the other kids were mad for at the time.

In due course my Norton’s arrived. Was I disappointed? Hell no. I don’t believe any book could have lived up to the expectations generated by a month or so of waiting for Edmund to come across with the goods, but it did indeed turn out to be a book of wonders. Not only did Norton’s allow me to conquer many of the Messiers and conduct countless successful Lunar missions way before Apollo with the aid of a beautiful two-page Moon map, it provided lots of cool information in the Reference Handbook section (written by J.G. Inglis) that came in handy when I wanted to impress my fellow junior high nerds.

What was the old Norton’s like? Despite its tremendous reputation back in the day—James Michener mentions it in his novel about NASA, Space—it’s a surprisingly skinny little volume of less than 100 pages, over half of which are devoted to the Handbook. The meat of the affair, however, is the atlas section, composed of sixteen single page charts, that make up seven equatorial “gores” and two circumpolar maps. These charts are very clearly drawn, with distortion being kept to a minimum by schoolmaster Arthur Phillips Norton’s self-invented projection system. They are also amazingly legible with their white sky/black stars and a green Milky Way. Everything shows up clearly under red light even to You Know Who's now late-middle-age eyes.

Another hallmark of Norton’s is that each pair of charts is accompanied by nice lists of Interesting Objects. Naturally, this being a product of the “old amateur astronomy,” Mr. N. goes heavy on double stars and variable stars, but there is plenty of deep sky stuff, too; more than enough to keep a youngun equipped with a 4.25-inch Newtonian a-rockin’.

For a while, anyway. It wasn’t long before even novice Rod began to note a few deficiencies in this otherwise wonderful book. By spring, I was complaining about an aggravating lack of stars. Norton’s, of course, goes down to 6th magnitude, the visual limit (for some folks). In many parts of the sky that’s fine. But for help finding the Virgo galaxies? Forget it. The Maiden’s Arms, where hordes of faint fuzzies lurk, are just about “guide star” free. Even in my suburban boyhood backyard there were many more stars visible in my small finder than in Norton's.  Also, the scale is so large that finding Virgo galaxies with these maps is near-about impossible. I eventually moved on to better finding tools and Norton’s was shelved and forgotten.

Not completely forgotten, perhaps. I still remembered the joy I felt when I first opened that old book.  And thirty-five years later when the step-daughter was at university taking astronomy, she needed a simple star atlas, so I picked up a copy of Norton’s 2000 for her, which was the first huge re-write and re-plot of the old warhorse. I’ll admit I didn’t look too closely at it. Why bother with TheSky and SkyTools on the hard drive?

As a matter of fact, in the bookstore today I hesitated before carrying Norton’s 20th to the checkout from the bargain bin where I found it languishing. What the heck would I do with it? After some vacillating (you know how Rod likes to hold onto his George Washingtons) I convinced myself it would be OK for quick reference tasks. Yes, even my Palm PDA has a deeper star atlas on it, but…but… there was the Reference Handbook, which does have lots of convenient tidbits for an astronomy teacher. Most of all, though, it was the HEAVILY discounted price that sealed the deal. The around five-bucks, just like the old days. Seemed to be some sort of sign.

So what’s Norton’s like five editions and 40 years later? The same yet different. It’s almost a misnomer to call this book “Norton’s” since nothing in it was written or drawn by him. The charts have been completely replotted. Not just precessed from the 1950.0 Epoch of my older copy, but totally re-drawn. That said, they are similar in concept, being composed of 7 gores and two circumpolars. They even look sorta similar, with a Milky Way in the same ol’ shade of puke-green. That’s where the resemblance ends, however. All deep sky objects now carry NGC or Messier numbers, and their symbols follow a standard we’re more used to (open ovals for galaxies, dot-circles for open clusters, circled crosses for globs, etc.). The stars are plotted with smaller symbols, and the font used for text on the maps is way more modern looking.

You’d think all these changes would conspire to make the new charts more legible. Alas, no. The originals are still easier on the eyes, remarkably. I don’t know if it’s the larger star-dots, the bolder fonts, or what, but they are noticeably easier to decipher by dim red light. Also, the original was wonderfully bound so as to open flat but also hold together over the years—mine’s still in one piece despite having been given a good chewing by an ex-wife’s black lab some 15 years ago. The new one is rather cheaply bound and does not lie flat, which is a huge annoyance out in the dark.

The Reference Handbook has, naturally, been rewritten by current editor, Ian Ridpath, and Inglis isn’t even mentioned anywhere that I saw much less credited with anything. The Handbook has been expanded to an impressive 142 pages and includes a photography-based Lunar map in four quadrants that is far more detailed—if much less pretty—than the 15th edition’s simple chart.

So it’s all bad? Not at all. You can’t blame me for waxing nostalgic about the original, and there are, as above, places where older is better, but Norton’s 20th is still a solid work of its type. You could do a lot worse for a mag 6 atlas. If there’s a major criticism to be leveled against it, it’s the same old one I had back in the spring of 1966: too few stars to make DSO finding easy. Even in this day of free downloads of million-star computer atlases like Cartes du Ciel, however, a shallow print atlas like Norton's can still be a handy thing to have. No computer booting nor printouts to print out. Just grab atlas and skedaddle out the door. I expect that once summer comes in and the bugs and trees and storms come back in with it, and my major instruments for night-to-night observing again become the 15x70 binoculars and the StarBlast, Norton’s will get a lot of use—again.

Summing up? For once, Mama was wrong. I continue to treasure this old book long after the slot-cars my buddies played with on those long ago summer afternoons have returned to rust and dust...