The Return of Amateur Astronomy 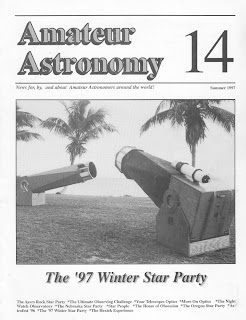 NO, not amateur astronomy itself; from what I can tell, that ain’t gone nowhere, muchachos. From where I sit, our obsession appears healthier than ever (counted up the ads in 'Sky & Scope lately?) despite what some of Uncle Rod’s fellow curmudgeons might say down to the local club. No, I’m talking Amateur Astronomy as in Amateur Astronomy Magazine. Actually it didn’t go anywhere either. Except away from Chaos Manor South.


I go back a long way with the magazine's founder, Tom Clark, and over the years his Amateur Astronomy has been closely associated in my mind with Tom and wife Jeannie and my favorite observing venue, Chiefland Astronomy Village. Yes, Tom always sought contributions from amateurs across the country and world and solicited articles from everybody from bigdob builders to folks caught up in variable star measurement. Amateur Astronomy more than lived up to its masthead blurb: “News for, by, and about amateur astronomers around the world!” But it also always maintained a special and ineffable Chiefland flavor.

Tom kept on keeping on with AA, turning out one great issue after another after another for close to a decade-and-a-half. Sadly, though, all good things come to an end (that's what ever'body always says but nobody ever explains why) and Tom’s desire to actually relax during his retirement eventually led to his decision to pass AA on to other hands. I knew this was coming, and was prepared. Tom had, in fact, offered his magazine to me. I was very tempted to take over as publisher and editor, but because of my many other commitments I had to turn him down. I just didn't think I could devote the time to the magazine that it deserved. Anyhow, the end of Tom Clark’s Amateur Astronomy was a downer for me. I let my subscription lapse and did not renew it after the transition.

There things remained until recently. The other day, in the course of a vain effort to impose some pre-spring-cleaning organization on Chaos Manor South’s countless stacks of amateur astronomy stuff, I ran across my stash of the complete run of AA. Couldn’t help forgetting the cleaning bidness for a bit, sitting down, and paging through ‘em. Years ago, Tom used to advertise back issues by calling them the equivalent of a foot thick reference book on amateur astronomy. Turns out that was true; maybe even truer than ol’ Tom thought at the time. Going through issue upon issue, I was blown away by density of information therein. Information still as useful as ever today. I also enjoyed seeing pictures of plenty of my amateur astronomy buddies back when we were all 30 pounds lighter and had more hair. Talk about nostalgia.

This waxing nostalgia led me to wonder what had become of that Little Old Magazine from Chiefland. To make a long story short, it’s no longer from Chiefland (AA is now based in Tennessee).  For that and other reasons, it’s just not the same. But what fondly remembered thing from the past ever is?

I subscribed to the "new" Amateur Astronomy, and wrote quite a few articles for it--I even had a column for a while. Why? I didn't think the magazine was anywhere close to what it had been under Tom's guidance, but guess I thought if I kept reading it and writing for it, that might somehow change.

I kept contributing, but had a falling out with the Editor. Honestly, I'm not sure what it was about--I suspect he read a Facebook post of mine that hurt his fundamentalist feelings. But I don't know that. All I know is that the last material I sent him never appeared, and my column was suddenly finis--though he didn't have the courtesy to tell me that. I put it down mostly to "oil and water." I can get along with most people, but not all people. And I'm sure his perspective is the same.

Comments:
On "Contact" (1997) young Ellie Arroway (Foster) and dad use relfectors to skygaze.

Has anyone noted the comet which is visible at the present time? I have seen an object in the western sky on Sep 30 and overhead on Oct 1. It looks like a cottenball and is not very bright. I used a pair of binos and a small scope