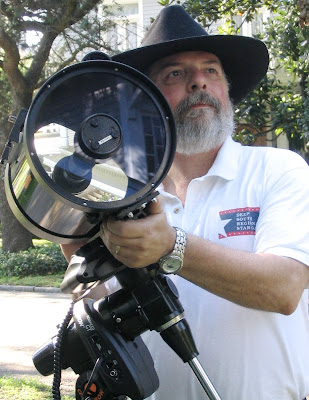 I used to think there was no way I would or could ever understand what it is like to give birth to a baby. That was before I wrote my first book. Writing a book about anything is a process that’s long, emotional, and, in the end, usually more than a little painful. To be specific, my new one, tentatively titled Choosing and Using a 21st Century Schmidt Cassegrain Telescope (the boys and girls in marketing prob’ly won’t like that and will insist on more-better-gooder) subjected me to a year-long gestation period that culminated in the birth of one slightly overweight bouncing baby CAT book.


Didn’t start out to be that way. In the beginning I foresaw a minor rework and revision of the original, Choosing and Using a Schmidt Cassegrain Telescope. Sure, there’d have to be more material on go-to scopes—at the time Choosing and Using was written, all there was from Meade and Celestron was the LX200 Classic and the Ultima 2000 (the NexStar was released just as the book was being finished-up). Choosing was aimed at the vast majority of CAT using amateurs of the time: folks interested in "manual" fork mount SCTs. Go-to, schmoto…the name of the game back then was learning to polar align a wedge mount scope.


Luckily, the selfsame marketing types mentioned in paragraph one had different idees. According to them, new editions of books just don’t sell well. If I wanted there to be a new SCT book (they said) I’d have to do more than just revise a chapter or two; I'd need to write a new or almost completely new book. The more I thought about it, the more I actually came to like the idea. I think Choosing and Using holds up pretty well, but there were and are things I did not like about it.

Starting with the prose. OK. Workmanlike. Sufficient. Doesn't make the Possum Swamp coyote pack start howling. But with a decade’s more experience in pro writing, I knew I could do better. It also became clear that, in addition to a redo of the Buyer's Guide chapter, the material on film astrophotography would mostly need to be replaced. I wouldn’t just be able to mention CCDs and let it go at that, either. I’d have to give newbies a good general grounding in the digital imaging game or there wouldn’t be much point to doing an imaging chapter. And how about DSLRs? And Webcams?

Then there was the project section. I still liked the stuff in it, but knew there should be more. I briefly considered scrapping the projects altogether, which drew howls of protest from the original book’s fans when I let the word slip.

The troubleshooting guide would need almost complete revamping--due to the dominance of go-to electronics, of course. There was also the matter of the book’s pictures. There should be more, many more. And better. I wasn’t satisfied with Choosing's index, either, or its lack of appendices. Furthermore—well, y'all get the idea.

When I began work, then, I was determined I would be undertaking an almost complete rewrite, not merely a revision. If you’re a fan of the original, you will notice a vaguely familiar passage or a hand-me-down paragraph here and there. But mostly it’s new from the ground up. I just hope that for once The Only Enemy of Good Enough is NOT More Better.

Be that as it may and will be. The manuscript is on its way to New York City as we speak and I’m feeling relieved if somewhat let down (post-partum depression?). To cure the “wadda-I-do-now?” blues, I’m hard at work on a new issue of my little Skywatch newsletter. That’s right, as promised it will carry on. I hope to have a new issue ready for y’all in a week or two. That being the case, if you’ve an article you’d like to see in Skywatch, send it on, there is still time. And there’ll be a “next one” after that, too, if not necessarily real soon.

I have the first edition and got it after I got my first Mak, wish I had found out about it before my purchase. Looking forward to the new edition.