Night of the Living Skywatch 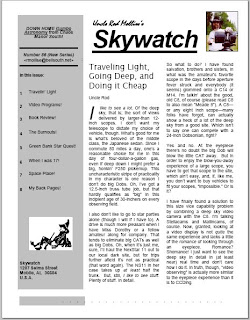 Or maybe Son of Skywatch. Or The Revenge of Skywatch. But most accurately The Return of Skywatch. Yep...betcha thought that little old amateur astronomy newsletter from Possum Swamp was a goner, huh?

Don’t blame ya; I thought I was finished with it after nearly a year without an issue. Tell the truth I was burned out. Or thought I was, anyway. In retrospect, I don’t really think it was burnout, it was just a matter of too much on my plate, which made it too easy to push good, ol’ SW to the back of the queue. I eventually realized, though, that I actually missed doing my little newsletter. How could I not after—amazingly—13 years of issues. Well, she’s back for good I hope and there’s some good stuff this time:


And, as they say late at night on WTBS, much, MUCH more!

As always, it’s free in the form of .pdf download you can get rat cheer. When will the next issue be out? Right as summer comes in, I hope--though I ain't a-promising. Let me know what you think of this one, and, as always, your contributions are solicited. What do I need?

You-name-it as long as it has to do with amateur astronomy. Just shoot me an email at rmollise@bellsouth.net

Despite me crowing about the return of SkyWatch, this was, ironically, to be one of the last issues. There were two more after this one and it was curtains, the magazine ending with #88. It was too much work for too little return, alas.  I liked doing it, but no longer loved doing it. When that happens with what began as a labor of love, you know it is time stop. Today, I'm still gratified that some amateur astronomers still remember my little publication fondly and ask about it.

Comments:
I love your blog. I'm a noob; took some students to an observatory last fall, started observing with binoculars, bought an Orion XT6 and am out in the back yard as often as it can be decently arranged.

After I got into astronomy I realized that most of my friends and acquaintances are burning with curiosity about all things celestial, and don't know how easy it is to have a look. So I started an infrequently-updated series on my own blog about astronomy for the utter beginner; the first two installments are here and here.

I downloaded and read the new issue of Skywatch. It's my first, so I've never had a chance to miss it, but I'm glad it's back all the same. I've been stargazing for less than a year and my astronomical writings are so far limited to blog posts and Flickr captions, but if you need submissions and don't mind amateurs of the rank variety, I'd be interested in writing something for you. Maybe something about getting beginners into the hobby or building a cheap travelscope, since those are the two things I'm qualified for.

I've published enough that I won't bawl if you have to go after my prose with a hatchet. Not much, anyway.

Keep up the good work. We appreciate it.

I will be looking forward to your submission, and glad you liked the new one!