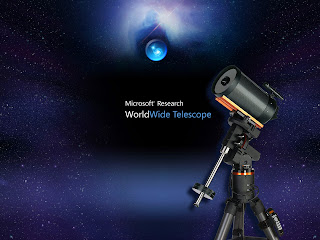 WWT. You know, that Microsoft thingy you’ve been hearing so much about this winter and spring, Microsoft Worldwide Telescope. What the H-E Double L is they-at? Microsoft describes it as a “browser for the night sky,” and in some ways that’s an apt description. In terms we are more familiar with? A great, big online planetarium program. What do I think of it? I’ll tellya (since when has Unk Rod been bashful about speaking his piece?), but keep in mind, the below is based on a bare ten or fifteen minutes of initial use this morning…

What it’s a lot like is Google’s Sky module for Google Earth or its standalone web-app: a representation of the night sky on the desktop, one stitched together from real images. You can drag the sky around with the mouse, and zoom in tight until galaxies or any other deep sky wonder fills the screen in high resolution. WWT, based upon my short exposure to it, is a bit smoother, and the images/sky usually more seamlessly put together (though not always) than Google’s effort. WWT has quite a few more features than Sky, but it is not worlds different from Sky. To be honest, WWT would have had a whole lot more impact on me if I hadn’t been looking at Google’s program for months.

Based on what I’m hearing, expect Microsoft to continually upgrade/improve the program. Google has made a few additions/revisions to Sky over the months, but most have been minor; the most interesting being the integration of the Celestron SkyScout audio material.

The program's requirements are not awfully tough (2ghz processior, 1 gig memory, decent vidcard), but it will not run on yer ol' Aunt May's 486-33.

Unlike Google, Microsoft has, even here at the very start (my download was marked “Spring Beta”), given a nod to actual observers. Like any respectable planetarium program, you can change quite a few things, including not just your location, but lines on the virtual sky and a few other configuration items. You can also control a scope with WWT via ASCOM! Not only that. You can automatically set up field of view indicators for a (small) number of telescopes (mostly Celestron/Orion with some Meades), and do the same for some CCD chips (SBIGs, Meade's DSIs, Orion's StarShoot II, and the Celestron NexImage).


As above, not only are the zoomed-in images of some DSOs not quite as seamlessly stiched together as we were led to believe they would be, image load time seems a little slower than with the Google Sky. ‘Course that could just mean that even early in the a.m. today everybody and her brother is playing with this thing.


How useful will WWT be to us (“us” being amateur astreonomers)? Hard to say. My brief exposure to it indicated it might be a tad awkward to use out in the field. In my initial foray, I didn’t see a horizon line or any way to turn one on, and found it a bit difficult to get oriented. Telescope control? ASCOM is a no brainer and should work well. Keep in mind, of course, that you must have a ‘net connection to make this thing work. That’s not too much of a problem anymore, though. Many folks have wireless broadband that extends well into the backyard. Star parties? It’s been a while since I’ve been to one without wi-fi.

It turns out it's easy enough to establish a horizon--by clicking "view from this location" on the View tab. I do wish it were possible to turn on constellation labels (or star names or planet names or DSO names) but I haven't found a way to do that. Nor does there appear to be a way to print charts--or save onscreen images other than with alt-PrtScrn.

There is no denying that this is an impressive piece of programming, but, as befits its current beta status, there are some mistakes. Bet you didn't know that the little galaxy NGC 3371 (near M105) is a "star," didja? Clicking for data on M79 returned "unknown." I found clicking about half a degree away got the glob's stats. The "click to identify" mechanics also seem a bit awkward. Like Google Earth (and Sky), WWT's sky tends to continue moving after a drag, making it challenging to click in the correct spot to obtain an object ID. On the plus side, a number of good data sources including NED are only a click away from the info window popup.

Where the rubber meets the road? Just go get it. Not only is WorldWide Telescope free, it's flat out amazing in many ways. In part because of what it's obvious it can become if MS keeps on keeping on with it.

How big a splash did WWT make in the amateur astronomy community? I don't recall hearing any amateur of my acquaintance mention it over the last dozen years. In fact, I had to click its web link to make sure it was still on the air (it is). Just because it didn't catch on with us, however, doesn't mean educators aren't using it and enjoying it, of course.