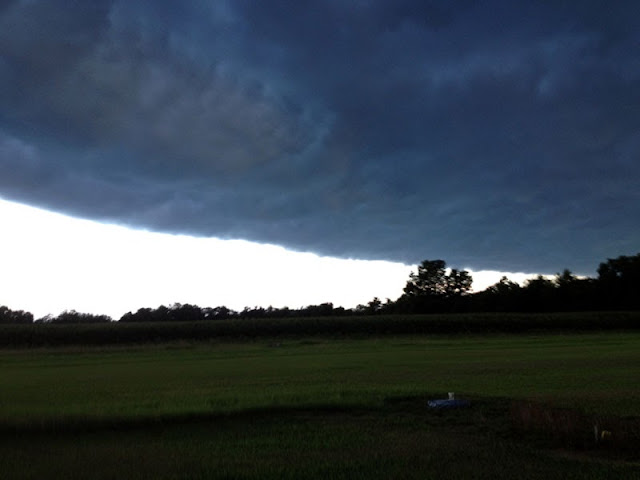 From the “How was the weekend down in Possum Swamp?” department… On Saturday evening we had, for once lately, something other than A Dark and Stormy Night, muchachos. Naturally, Old Unk wanted to observe. Hell, between clouds and work I hadn’t been out with anything more’n a pair of 10x50s in weeks. By  5 pm the sky was looking clear and the club Dark Site Beckoned. But.


Yes, there is often that “but.” Earlier in the day, intense thunderstorms bordering on the frightening passed through. How frightening were they? The cats spent the balance of the morning and afternoon hiding under the bed.

We lost the Internet completely, early, too. Despite the best efforts of AT&T’s technical “support” to misdiagnose the problem, Unk finally troubleshot it to a blown surge suppressor and got ol' Chaos Manor South back online for a look at Weather Underground. The rain was torrential. Selma Street flooded and then threatened to escape her banks. Despite the nastiness, it cleared by mid afternoon, just as Wunderground predicted. B-u-t. I figured the Dark Site, out Tanner-Williams way, would look like Lake Okefenokee. But. I wanted to look at the deep sky. Hungered for the deep sky. What the heck. Threw the gear in the car and headed out ‘bout 6pm.

Arriving at our sweet little spot of blackness on the Google Earth Light Pollution Map, I found the field not exactly dry, but not full of standing water, either. Didn’t need my galoshes for setting up the Dob, after all. Yep, Dob. As most of y'all know, I use ‘em, and, frankly, when the night threatens to be "iffy" but I want some aperture, that’s exactly what I do choose: Old Betsy, our time-honored f/5 truss-tube 12.5-inch. She goes together quickly, breaks down just as quickly, and her amazing Sky Commander DSCs never miss a beat. That’s what I thought anyway. 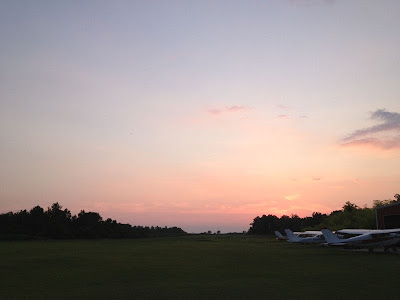 Like many of y’all, I’m guessing, I always try to maximize my observing time, so as soon as I can see a couple of alignment stars, even barely, I get the Sky Commanders cranking. On this evening, I used the stars I have been using for the last several months with the DSCs: Polaris and Sirius. Lined up on the two sparklers. Hit enter a couple of times, boom, done. Or so I thought. It was now dark enough to make out brighter DSOs, I figgered, so I punched up M3 as a quick check. Pushed-to the spot the Sky Commanders told me to push-to to. Nuttin’ honey. Slewed around a bit. Uh-uh. Hmmm. Maybe still too bright for even that spectacular glob? My observing buddy for the evening had his Dob pointed to little Mercury, who was skulking just above the western horizon. Thought I’d try that. About 20 degrees off. What the frak?

"Maybe, just maybe," Unk speculated, "Sirius is getting a wee bit low in the west to be a good alignment choice. How about Polaris and Procyon?" Same-same 20 degree miss. Maybe I was pushing some button wrong? Nudder alignment, this time Polaris and Sirius again. And, again, no joy. What the H-E double hockey sticks was going on? I was facing north contemplating the sitchy-ation when my optic nerves and my few surviving brain cells conspired to provide the answer: “Rod, you dummy, you are aligning on Kochab and Sirius, not Polaris and Sirius.” Doh! That sorted, the Sky Commanders were back to their usual spot-on accuracy.

Almost all was to the good after that. Turnout by my fellow club rascals was a little disappointing—just one other die-hard in addition to Unk--but I could see why. With the Sun barely down, scope, eyepiece case, observing notes—ever'thing—were already covered with a nice coating of dew. "Alabama rain," we call it. Looking down-field into the west, ground fog/mist/whatever was all too evident as well. So be it. My buddy and I started working Coma – Virgo hard.

How’d we do? I’d estimate that by midnight, when the fog, real fog, rolled in for good, we’d done, between us, over 100 galaxies--and a handful of other object types, too. Standouts? For me, probably the Whale, NGC 4631 and The Silver Needle, NGC 4244. The Whale was not just bright, showing off her vaguely Cetacean shape, she was accompanied by The Calf, little NGC 4627. I was not overly surprised to see the little guy in the 12.5, but I was impressed that he showed in my companion’s 10-inch Discovery Dob under these humid and hazy conditions. The Silver needle in the 12.5-inch was actually anything but a Silver Needle. It was a sprawling thing, reminiscent of NGC 253, I thought.

Lotsa good stuff, in other words. But it was not all gravy. I had three problems over the course of the evening. First, was the omnipresent dew. Before long I found my secondary fogging up. What to do about the dew? I had my zapper gun with me, BUT I’d neglected to bring a battery for it. No extension to run it off the car’s 12v receptacles either. It was either shut down or find out why the AstroSystems secondary heater I’d installed during the scope's recent repair and refit wasn’t doing its job.

A little poking around revealed the heat from my fingers would warm the temperature sensor enough to turn the heater on. A few minutes of doing that and the dew was cleared. Repeat as needed. Why wasn’t the heater firing off automatically, though? A look at the instructions the next morning pointed to the default temperature setting, which I’d left alone when I'd installed the thing. This setting would probably be great for Colorado. Not for Possum Swamp, though. I’ll disassemble the secondary holder this week and adjust the temperature to the"Spongebobsquarepantsville" level. 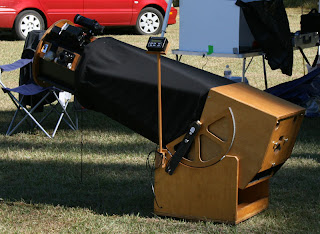 My second problem was not really a problem, just an annoyance. Following crazy-heavy rain, the skeeters were out in force. Luckily, I’d remembered the Deep Woods Off this time. In my experience you need something of this strength, something that contains plenty of DEET, or you’ll soon wind up anemic down here. As it was, the little devils buzzed me continuously, but didn’t bite a bit.

The most serious problem, however, was the sky itself. Large areas, anything anywhere near the Mobile, Alabama light dome, were gray. Low power views were vile. That bright background didn’t just obscure detail; it looked plain ugly. I fought this with the only tool that seemed to help, a 13-year-old 12mm Nagler Type 2. This old warhorse, ably assisted by a 16mm William Optics Uwan and a 7mm Uwan, provided enough magnification to keep the grays out but enough field to keep DSOs pretty. Alas, as well as the 12 and the 16 did, I couldn’t help thinking TeleVue's new 13 Ethos would be even better. Sigh. There goes the piggybank.

And so it went, galaxy after galaxy looking surprisingly good, even when the ground fog rolled in and we were peering up through it. Man was it wet. Miserable. I hope those of y'all who observe from west of the Missiissip know how lucky you are. Even the coyotes had enough sense to stay in their dens on this night—they usually put in an appearance, curious about what we dumb humans are doing. And yet…and yet…miserable as it was—I’m still drying out the gear—today I’m haunted by my memory of that massive whale swimming in a pitch intergalactic sea. Worth the discomfort? Yeah it was, muchachos.

Gosh it takes a lot of dedication to observe under those conditions....

“Rod, you dummy, you are aligning on Kocab and Sirius, not Polaris and Sirius.”

Heh heh. I'll see you and raise. I was out taking some snaps of the moon tonight and decided to have a peek at Saturn before I went in. Looked over my shoulder and there they were, Saturn and Regulus, right over the garage where they belong. Swung onto target (manual Dob). Decided to start at low mag and just go up and see how much better it got and how fast. At 30x I couldn't see the rings. Puzzling. At 48x they still weren't there. Clearly this was not Saturn. I backed away from the eyepiece and looked up in the sky. Saturn and Regulus, right there. Maybe I was pointing at the wrong one. Swung over to the right a little. Nope, Regulus was definitely dimmer, so the other one had to be Saturn. The seeing was crappy tonight...was it possible? (Yeah, in retrospect I shoulda caught on sooner. Part of the story.) Up to 96x. Still nothing. Now I know something's out of whack. The telescope is pointed right at Saturn, next to Regulus, right over the garage, same place they were last night when I showed my wife-

Actually, this could be a fun survey of the masses--how long have you observed the wrong object before you figured it out? I'll bet most everyone has at least one story like that.

Don't know what happened to your other comment...guess she went off into the ozone. Anyhow...as to your question, save for an expensive widefield, or jump into the spacewalk game with something simpler. My answer? If you're using a fast scope...say f/6 or faster, I'd definitely advise you to save up for the high priced spread. An SCT? Give one of Orion's 68s, one of Herb York (Anacortes) Bird's Eye 82s, or any one of a number of imported ultra wides a try. You might be suprised at how well they do. No, won't be Uwan, Nagler, or Ethos, but you will get a good taste.

Wow, thanks for the fast response. My only scope faster than f/6 is a 13-year-old Edmund Astroscan that I picked up used for $100...no way am I going to save up six times that much for an eyepiece for it! I see that Williams Optics has their 70-degree SWANs for $78, which is two more degrees than an Orion 68 for a little less than 2/3 the dough. And WO gear gets pretty darned good reviews. And it'll be my birthday next month...

Oh, and remember to check Astromart...who knows what you might find for a nice price!