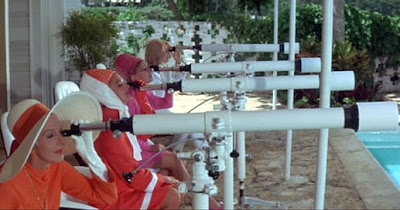 It’s cloudy here at good, old Chaos Manor South, and, in the wake of NEAF, there ain’t much going on in the larger world of amateur astronomy to report on neither—no more Ethos uber eyepieces for a while, I reckon. Being as bored as Unk was, I suppose, my mates on the SCT User Yahoogroup started playing a game that turned out to be quite a bit of fun: “spot the scopes in the movies.” This was no doubt inspired by the brief appearance of a CPC 1100 in the current Hollywood mega-ultra-blockbuster, Ironman.

How do you play? Simple, just name/document films that, at least fleetingly, show a telescope. “Telecope” specifically meaning amateur type telescope—countless films have no doubt used observatory domes and radio telescope antennas as backdrops. What kind of scope? Being fixated on CATs, that’s what mainly got mentioned on SCT User, but surely plenty more small refractors than SCTs have appeared over the years (since even the tiniest refractor looks more like a telescope than the most set-dressed SCT). Undoubtedly there have been a lot of small Newts too (usually pointed at the ground, if’n you know what I mean).

Here are some of the films/telescopes we came up with on SCT User:

A Walk to Remember (2002). Mandy Moore as a smart teenager who reforms delinquent Shane West. Mandy uses her homebuilt reflector in several scenes. Near the end, Shane builds her a Dobsonian reflector to watch a comet.

Can’t Buy Me Love (1987). Patrick Dempsey and Amanda Peterson teen romance. A scope is integral to the plot in this one, believe it or not. Our hero uses the money he was gonna spend on a Meade SNT (pre-LXD55/75, natch) to hire Peterson to pretend she is his girlfriend. Wotta maroon! The scope in question is used briefly at the beginning of the film to (uh-huh) look at girls at the Galleria.

Close Encounters of the Third Kind (1977). One of the good folks on SCT User mentioned an orange tube Celestron being present in the “landing area.” I've never noticed that over the last 31 years; guess I’ll have to dig out that great DVD again.

Contact (1997). Young Ellie Arroway (Jena Malone) uses a small scope with her beloved Dad at the beginning of the film. Make?

Death From a Distance (1935). An astronomer is marked for death and the murder weapon is a telescope. It's not clear to me whether the scope in this one is an amateur instrument or not, and, if so, what make?

Down with Love (2003). This Renée Zellweger/Ewan McGregor spoof of the Rock Hudson – Doris Day films of yore prominently features a White Tube Celestron C10 (that, in the film, belongs to the “Tony Randall” character played by David Hyde Pierce). It’s even used to look at the sky!

In Like Flint (1967). James Coburn battles a cabal of women bent on world domination, apparently using the nice-looking refractors in the picture above (make?).

Into the Wild (2007). In this melancholy film, Chris McCandless (Emile Hersch) gifts his father with a Questar 3.5. There's an Uncle Rod connection too. The graduation scene in this film was actually shot at an Emory University graduation, and Unk's step-daughter, Beth, one of the grads that year, is seen briefly in closeup.

I.Q. (1994). Meg Ryan is the niece of Albert Einstein and Tim Robbins is the mechanic who falls for her. Tim and Meg go out in a field to watch a comet zoom by, and Dr. Einstein (Walter Matthau) uses an old brass refractor to watch them.

It Came from Outer Space (1953). Richard Carlson and Barbara Rush use a lovely old refractor (a Clark?) equipped with a bizarre plumbing-parts diagonal to keep watching the skies.

Roxanne (1987). Steve Martin's squeeze (in the movie), Daryl Hannah (Roxanne) searches for a comet. What kind of scope was that, though?

The Heartbreakers (2001). Jason Lee is an amateur astronomer/bartender pursued by the conman team of Sigourney Weaver and Jennifer Love Hewitt. Can somebody tell us about his telescope?

Tomb Raider (2001). Miss Croft (Angelina Jolie) uses an SCT to look at a “planetary alignment” or some such cat-foolishness.

The Mechanic (1972). Charles Bronson cases an apartment with a Questar 3.5 before—yep, you guessed it--blowing it up.

The Wolfman (1941). In the beginning of the movie poor, soon to be hairy, Larry Talbot uses his late daddy’s big refractor. As per usual, however, he uses it to ogle a dame, not Lupus.

This is only the merest sampling. I look forward to getting your sharp-eyed scope spottings. Just post ‘em in the comments section and I’ll add ‘em to this list. Wanna branch out into TV, too? Why not? Hey, like I said, it’s cloudy and there’s a Moon in the sky!

And of course, in Contact, Ellie is using a small telescope when her dad has a heart attack. Later, she gets to use the VLA radiotelescope in New Mexico to search for ET--and receives a message from Vega.

Please do not forget Silent Running (1972) starring Bruce Dern,Cliff Potts and of course the robots Huey, Dewey, and Louie in this environmetal sci-fi. You will see the famous vintage orange C-8 with the sandcast forks in several parts of this classic movie!

Thanks for the entries so far...keep 'em comin!

"Death From a Distance" - an astronomer is marked for death and the murder weapon is a telescope.

The hero is an amateur astronomer!

In the recent movie "Into the Wild", teenager Christopher McCandless (played by Emile Hirsch) gets his dad a Questar 3.5 as a birthday present. Must be in a different tax bracket than I was in when I was teenager--or am in now!

"I.Q." (1994) stars Meg Ryan as the niece of Albert Einstein and Tim Robbins as the mechanic who falls for her. Tim and Meg go out in a field to watch a comet zoom by ('cause comets ZOOM in the movies), and Dr. Einstein (Walter Matthau) uses an old brass refractor to watch them.

"A Walk to Remember" (2002) stars Mandy Moore as a smart teenager who reforms the delinquent Shane West. Mandy is into astronomy and uses her homebuilt reflector in several scenes. Near the end, Shane builds her a new huge dobsonian reflector to watch a comet zoom by. (Those movie comets are fast buggers!)

One more for you. In Darren Aronofsky's The Fountain (2006), Izzi uses a 60mm refractor to show Xibalba to Tommy, out on their snow-covered deck. The nebula they look at is clearly supposed to be M42, but in the movie it is a golden cloud around a dying star.

And yet another (just when you thought this thread was dead). In Raiders of the Lost Ark, when Indy visits the old man who translates the writing on the headpiece of the Staff of Ra, there is a fat, possibly wooden refractor pointed at the sky in the background. Dunno how I never noticed it before. Who knows where you'll have me seeing telescopes now.

In Like Flint. They look much like the 80mm f/15 Cartons. The flare of the lens cell is what makes me think this.
Doug

Nice website! have you seen Brian de Palmas film "Body Double"? It's about a guy who uses a telescope to peek at a neighbour woman. I cannot tell what telescope, though, but it's seen in many scenes.

Addicted to love, about an astronomer spying on his ex using a telescope