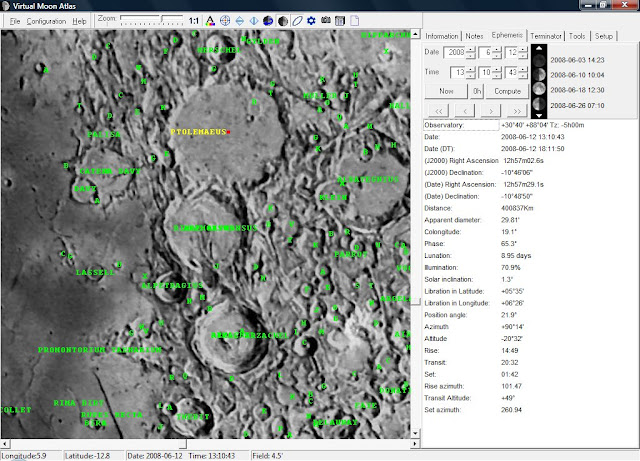 If you’re a Lunar observer, you really oughta if'n you don't. What theheck is Ol’ Unk going on about now? What I’m going on about, muchachos, is something you should be going on about too, one of the best pieces of astronomy software to hit my hard drive in many a Moon, Patrick Chevalley and Christian Legrand’s Virtual Moon Atlas. Not only is it great, a breakthrough of sorts, it’s free--just my kinda software.

I know most of y’all probably associate Uncle Rod more with deep sky observing and imaging with SCTs than you do with “serious” Lunar observing, but, truth be known, I’ve had an ongoing love affair with graceful, silv’ry, Diana. The first thing I looked at with my first telescope was the Moon, and I never quite got over her. Earth’s faithful companion has drawn me to her for over forty years thanks to her lustrously beautiful, ever-changing face.

Eventually I found myself moving beyond quick glances at a gibbous Moon and idle staring at the occasional Lunar eclipse. I was becoming seriously interested in this little world, both as a visual observer and as an imager (especially with the coming of the webcam revolution). Heck of it was, though, my growing fascination with Selene was stymied at every turn. Until recently there wasn’t much in the way of resources to guide a serious student of Luna.

Oh, sure, there were and are some fairly good general interest and even a few observer-oriented Moon guides. The name “Patrick Moore” comes to mind. But once a Lunar observer moved beyond fledgling status what was there? Well, there was Rukl. Antonin Rukl’s time-honored (and currently out of print, though still available) Atlas of the Moon. Which is a great book. A lovely book. Surprisingly, however, given its quality and near-legendary status among amateurs, “Rukl” is also fairly quickly outgrown by the dedicated student of mysterious Hecate. It most certainly is a landmark work; it’s just that it is the Lunar equivalent of Sky Atlas 2000, which is also a great book. Those of us serious about the deep sky usually move on from SA2000 to more detailed atlases like Uranometria, though. What is the Moon maven to do after Rukl?

That “what” used to be tough. The “professional” Lunar atlases, things like the Lunar Aeronautical Charts (LAC), developed for the Apollo program, were usually locked away in government archives and observatory libraries out of reach of greedy amateur fingers. That began to change recently, with several of these resources becoming available on CD and DVD (one of the most notable of these, in addition to the LAC, being the LOPAM, the Digital Lunar Orbiter Photographic Atlas of the Moon). Which was cool. But not overly convenient. Page scans work OK, but what I really wanted was not just a book on disk, but a TheSky or Megastar or Starry Night for the Moon. Which finally happened. As the new century began, several Lunar programs aimed at amateurs appeared. Some were good, like Lunar Phase Pro. But none were really what I had in mind.

Not until Patrick Chevalley turned his hand to developing a Lunar atlas soft. Patrick, who many of you know from his stand-out planetarium program Cartes du Ciel, teamed with noted Lunar observer Christian Legrand to create Virtual Moon Atlas, VMA, which is currently in version 4.0.

What’s so great about VMA beyond the fact that it don’t cost nuttin'? Almost everything. If you want the complete rundown, you need to trot over to the program’s website http://www.ap-i.net/avl/en/start, but, in brief, what you have in Virtual Moon Atlas is a beautifully detailed computer model of our favorite satellite. There are thousands and thousands of features identified and described. Start this puppy up and zoom in on Copernicus, for example, and you’ll see what I mean. When you reach max zoom, you realize you’ve gone way beyond Rukl (Yay! All them little a-b-c-d-e craters). Lot more convenient for use in the field, too; identification of a feature is just a mouse click away. Not just names, either, but detailed information including size, geological data, observing tips, and much more. The basic VMA map is just the start, however.

One of the huge pluses for Virtual Moon Atlas is its extensive image database. At a minimum, expect even a minor feature on the main map to be accompanied by an LAC chart and usually a LOPAM. Often there are also numerous other images from various sources displayed on the thumbnail bar that comes up when you click the little camera icon on the VMA menu. Click a thumbnail, and a beautiful “plate” opens in a new window. Fancy yourself a Lunar imager? You can add your own pictures to Virtual Moon.

But I’ve still barely scratched the surface of what Virtual Moon can do. Relax, I ain’t gonna bore you much longer; just suffice to say that VMA also includes multiple textures for the main charts (switch from an albedo style map to a crust thickness depiction, for example), an ephemeris (when is it Full Moon?), distance measurement facilities (how big is this crater?), a good search engine (where the heck is Ukert?), and even a go-to system for computerized telescopes (click on a Lunar feature and VMA will send your scope there with the help of ASCOM).

One huge, HUGE plus this program has over print Lunar atlases for us CAT fanciers? WE CAN MIRROR REVERSE THE CHARTS TO MATCH THE VIEW IN OUR SCOPES! Yeah, that may not sound like a big deal to you Newtonian toting Bubbas and Bubbettes, but, trust me, if you’d been trying to mentally flip Moon maps for thirty years while viewing through a star diagonal equipped CAT (or refractor), you’d know the all-caps bidness is warranted.

What about the mechanics of all this good stuff? How demanding is this program for your ol’ Aunt May’s observatory computer? You won’t run it on a 286 DOS machine. You’ll want a recent flavor of Windows (the current release has been optimized for Vista). The main need for a smooth and powerful VMA experience, however, is a GL compatible video card. That is frankly not a huge deal, since even 400 buck BestBuy boxes are now ready to go in that regard. Virtual Moon will run on less capable video cards, but will not be as much fun.

Convinced? OK. Where do you get it? Off the website link above. How big is it. Well, that depends. While there are a couple of smallish versions available, a “Light” VMA and an “Expert” VMA, if your love affair with Artemis is as serious as I hope it is, you’ll want VMA Pro. Alas for those of y’all without broadband access, Pro is a whopping 422 megabytes. Now, don’t get excited. Mssrs. Chevalley and Legrand are not leaving y’all out in the cold. A CD with the Pro version on it (and some cool extra goodies, too) is available for a very reasonable—even considering the current exchange rate—20 Euros.

But why, Uncle Rod, why? If this program is so great, why are they a-giving it away for free? I’ll let Patrick and Christian answer that:

“The authors make [the program] free for amateur astronomers, lunar observers and students who wish to practice selenography. They hope to promote Moon observation and knowledge because our satellite will become one of the next human spatial exploration step.” Ain’t that cool? Sure is, muchachos, sure is.