To Set Sail on a Wine–Dark Starry Sea… 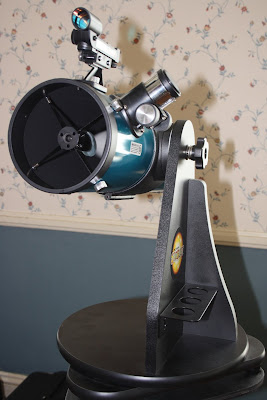 You gotta have sails and a rudder. You need stuff, astro-stuff. Telescopes, eyepieces, atlases, filters, computer programs—all that wonderful gear you and me drool and obsess over. If’n you’re reading this, I’m guessing you are probably to the point where you’ve got what you more or less need. You’ve got a scope you can at least live with—even if you sometimes think you can’t. Sure, there’s always the attraction of the More Better Gooder, but those of us who’ve been in this wonderful avocation for a year or three are probably getting by somehow.

But what about the excited new sprout down to the astronomy club? Or your formerly skeptical brother-in-law who got one look at the Moon through your C8 and is now showing all the signs of incipient amateur astronomyitis?


The time-honored answer is, “Forget telescopes, get a pair of binoculars and a planisphere, learn the sky, then we’ll talk telescopes.” That may not have been too bad a suggestion back in the day, when everybody had to star-hop and there was no way of getting off square one without some basic knowledge of the night sky. But even back then I had my doubts.

Problem is, whether learning the sky is or is not a good thing (and I still think it is), it misses one important fact: most beginners don’t care pea-turkey about the deep sky. Oh, they might be impressed by the look they got of M42 or M13 in your eyepiece, but that’s not what they lust after. What the newbies want (and what I wanted way back when, too) is Lunar craters and the rings of Saturn. A pair of binoculars won’t satisfy these wants. And “binoculars only” may mean the new recruit starts paying more attention to TV Guide than the Clear Sky Clock (or is that “Charts”?). In my opinion all astronomers, new and old, need a telescope.

Yep, a genu-wine telescope. Oh, I think it’s probably a good idea to insist your novice buddy equip herself with a pair of 10x50s and a Phillips Planisphere in addition to a scope, but that’s cheap enough to do these days. A perfectly useable pair of Bushnells can be found at the local Wally-World. Might not be a bad idea to go along on that buying expedition, though, lest your charge be seduced by a pair of fixed focus (“auto focus”) or red tinted objective (“Ruby Lenses!") horrors. Binocs in hand and constellations being learned, there is still the matter of a telescope.

In some ways it’s easier to play “don’t buy” than “do buy.” I, first of all, steer novices away from go-to. You may be surprised to hear that, since ever’body knows I’m a go-to fanatic, and think it’s the best thing to hit amateur astronomy since Kentucky Straight Bourbon whiskey. It’s just that I think a computer is more of an impediment to fun than a source of it in the beginning.

Most go-to systems require at least a basic knowledge of the brightest stars in order to align the scope. For Mr. or Miss Greenhorn, that’s a real showstopper. Sure, modern go-tos are fairly easy to use, and just telling the novice to “center the brightest star closest to where the scope stops” sometimes works. Alas, it just as often doesn’t: “But I see more than one bright star, Uncle Rod.” Also, even with a system that doesn’t (supposedly) require sky knowledge, like Celestron’s SkyAlign, all the computer frippery is almost always more confusing than helpful to start, and endless concerns about alignment choices and HC menus and drive training and tripod leveling may mean the scope makes a quick trip to the hall closet and the formerly enthusiastic beginner makes a quick trip to the couch in front of the boob tube.

What else don’t you “let” ‘em get? A lot of newbies start reading the Forums or Yahoogroups and get all het-up about small APOs, “It’s small and cute and expensive; that oughta really show me something.” Alas, after a while, most novices find they aren’t very impressed by what they see through an 80mm scope, no matter how fine: “Well, I think I see the rings.” Interest wanes and into the closet or onto Ebay goes that jewel-like refractor. “OK, then how about a longer focal length refractor? A 4 or 5 or 6-inch achromat, maybe?” There are a few decent ones around that eschew go-to, but generally, the Color Purple and the shakiness the long tubes impart to the class of mounts you usually see these puppies sold on makes the experience less than a happy one for the typical beginner who expects perfection for 500 bucks.

What about a small SCT? One like Celestron’s Omni XLT C5 on a non-go-to GEM? Or maybe one of the Synta-made small MCTs that Orion sells? That could work, but in my experience most tenderfoots (feet?) find GEMs a little scary, and are far more comfortable with “point ‘n shoot”—an alt-azimuth mount of some kind. Something like the new-style alt-az mounts sold by several vendors might serve. I hear lotsa good things about the Astronomy Technologies Voyager mount, especially. Bottom line, though? Without a whole lot of money to spend, the small MCT/SCT arena is almost as bad as the APO/ED refractor game when it comes to the aperture-for-the-dollar ratio. A 90mm MCT won’t show much—if anything—more than that 80mm ED.

I hope you-uns are sitting down. You are about to be surprised. Me, Mr. SCT, thinks, and has for a long time, that the best beginner’s scope of all is a DOBSONIAN. Yeppers. A Dob in the 4 – 10-inch range has been Just the Thing for almost every newbie it’s been my pleasure to initiate. Which Dob? Ain’t no shortage. Meade, Orion, Zhumell, Sky-Watcher, and many more all sell rock bottom priced scopes in this aperture range.

Why do I draw the line at 10-inches when even larger aperture Dobbies (of Chinese heritage, natch) are so blasted cheap? A too-heavy scope, like a too-computerized scope, is a leading cause of the Telescope-in-the-Closet syndrome. You want these folks to see something, sure, but you also want them to want to see it often. A reasonable size Dob will encourage Jane Newamateur to get into the backyard for a 20 minute look at the Moon on a work/school night. A 12 or 16-inch monster won’t.

Which Dob? Specifically? As above, there are plenty of bargains out there. All the brands listed above are fine for beginner use. But if you just insist on me being specific, I suppose my choices would be either the 4.5-inch Orion StarBlast shown above, or Orion’s 6-inch Skyquest XT-6. Both of these Synta-made scopes are available from major scope dealers in addition to being sold direct by Orion.

They are somewhat different instruments, but either will make a tyro happy. The 6-inch XT is probably the closest thing to an all-round scope, even in this latter day. Being blessed with that classic 6-inch f/8 set of optics, it is fully capable of showing all the basic wonders of the universe. All the basic wonders? “Just” a 6-inch? Why, back in my day (you whippersnappers), a 6-inch f/8 Newtonian was the telescope of a lifetime for more than one amateur, and was what most beginners hoped to get SOMEDAY. In addition to a low price that leaves room for plenty of accessories, the XT has, above all, got good optics, optics that will amaze and gratify. Caveats? Be prepared to do some novice hand-holding during the first trip to Collimation Town, but that is what you and me are here for, ain’t it?

Why would I recommend the StarBlast alongside the XT? It ain’t that much cheaper, and is “only” a 4-inch. Yessir, but what a 4-inch. That’s enough aperture to show many, many objects, and its f/4 focal ratio and red dot finder mean point ‘n shoot heaven. Little escapes even the greenest novice given the tiny Dob’s enormous field of view. I use a StarBlast regularly myself, and it is capable of jaw-dropping deep sky views (e.g. the entire Veil shining bravely in the scope’s huge field), but will take 200x on the Moon and planets. It is also supremely portable, cute, and anything but intimidating. Only “uh-oh” is that it gains much of its portability by means of its tiny one-arm-bandit Dob mount. It’s quite stable, but you’ll need something to set it on unless your name is “G.I. Joe” or “Barbie.” L
Either of these scopes, those Bushnell 10x50s, a planisphere, and your steady guiding hand will set any newbie on the voyage of a lifetime and will pave the way for the succession of big and complex scopes that will surely follow if you have done your job right.

What’s that? How about the What Else? The charts, eyepieces, and what-nots the youngun will also need? In addition to the planisphere, I recommend good old Sky Atlas 2000. Don’t have ‘em buy a magnitude 6 atlas that will be quickly outgrown. SA2000, a little red LED light, and maybe a free download of Cartes du Ciel and your ward is ready for lift-off. What’s that? I’ve left out the most important accessory of all? Wuddabout eyepieces? Ah, now that’s a touchy and thorny subject that deserves its very own blog entry. In other words, “stay tuned.”

Comments:
Hear, hear! I've been doing this for less than a year, so I'm not speaking with a whole lot of experience, but my Orion XT6 has made me and lots of houseguests and neighbors very happy. I've picked up other scopes since--some of that astronomyitis you mentioned--but in the sweet spot for aperture, portability, and cost, the XT6 can't be beat. I'll probably have it until I die.

And you're absolutely right about 20 min work night observing session. Most months those are all I get. But what else am I gonna do--not go out? Those half-hour sessions help me keep my sanity.