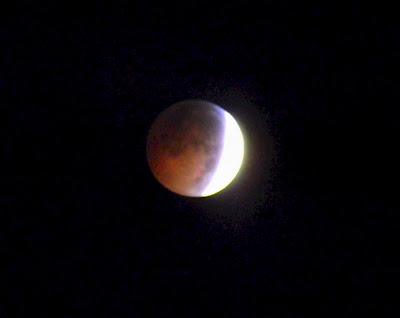 It was well after midnight and still my daughter Lizbeth and I braved the cold. Some of the chills, however, came not from our icy 45F weather, but from the spectacle of a Real Good Christmas Eclipse. For once, the weather gods cooperated, with the inevitable bad ol’ clouds holding off till after mid-eclipse. Wherever our chills came from, they were worth enduring. The December 21, 2010 total lunar eclipse was a pretty and dark one, muchachos. Hope you caught it.

For Lizbeth, it was her first Christmastime eclipse. In fact, we were gobsmacked to realize this was the first lunar eclipse of any sort she’s witnessed. Me? My second. Oh, I suppose I’ve seen a few more December eclipses than that. I could check, but there’s no need to; only one has lodged itself in my memory and made much difference beyond the immediate.

Preparing to make this entry, I felt drawn to revisit the scene, for me, of the total lunar eclipse of December 18, 1964, Mama’s Methodist church. As most of y’all know, I am not a church-goer. I am a believer, but I've never been able to summon up much enthusiasm for organized religion.  I suppose if I ever feel like I am missing anything by not being a member of a congregation, it is at this numinous time of year.

“Numinous” is right. As December 25th comes on, memories of Christmases past attain a golden glow—even those Christmases that weren't so rosy when we lived them. So it is for me with Christmas ’64 at the Kingswood Methodist Church.

I was in church frequently until my teen years--thanks to Mama--until I finally rebelled one cold and wet Sunday morning toward the end of the 1960s.  Be that as it  may, if you were a suburban family in the 60s, especially a southern suburban family, out in the New Frontier beyond the cultural resources of the city, social life for both kids and adults revolved around two things: school and church. Kingswood was a significant part of my life whether I liked it or not. And when I am honest with myself, I admit most of my memories of it are good ones. 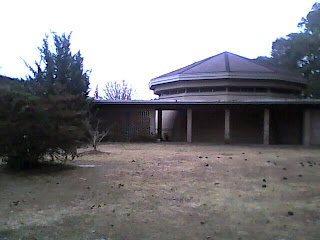 On a whim, almost, on the way to the Target store to pick up one last brace of gifts, I turned down a well-remembered street and stopped in front of Mama’s church. What gobsmacked me was how little has changed. The near-bizarre flying saucer-shaped Mid-century Modern sanctuary still stands, though its simple elegance has been ruined by the new roof that now caps it. Some pinhead tried to gussy up the old building, I reckon, and fell prey to the dreaded The Only Enemy of Good Enough is More Better syndrome.

I got out, snapped a cell phone pic or two, and long dormant memories came flooding back as I stood on the winter-brown lawn. Especially of the night of the BIG KINGSWOOD YOUTH CHRISTMAS PARTY, which coincided with a total lunar eclipse. How I’d argued with Mama about missing the eclipse for a dumb old church party. How my teacher and mentor, Miss Emily Baldwin, herded us outside as totality began. And how she worked her legendary wiles to see I wasn’t only awestruck by the eclipse, but empowered by it.

In 1964 something was auspiciously aligned, whether the Moon or the Fates. That year will always be remembered by me as the Astronomy Christmas. Not only did I gape at that grand eclipse, that was the Christmas Stars entered my life at another church party that December, just as I was on the cusp of huge change. There’s never been another Christmas quite like it--though the Christmas of '72 comes VERY close. Perhaps there’s exactly one special Christmas to a customer. A Christmas that comes when you really need it.

Anyhoo, Lizbeth and I enjoyed the heck out of this December’s eclipse. We didn’t drag out a lot of gear. Not even the ETX, Charity Hope Valentine, who produced some beautiful eclipse pictures the last time Selene hid her shining face. Even that modest telescope seemed contrary to the Spirit of ’64. We grabbed Miss Dorothy’s Celestron 10x50s and, almost as an afterthought, a little Fuji superzoom digicam. We snapped away, chirping about the eclipse’s dark beauty and having a high old time.

As totality came in, though, Lizbeth and I fell silent. Suddenly, all those long years melted away as in a dream, and I could again feel the scratchy wool of the winter suit Mama insisted I wear on that long ago December night. Again, Emily Baldwin prompted me to explain what was happening just one more time, just as our shaky pre-teen voices spontaneously began Silent Night. 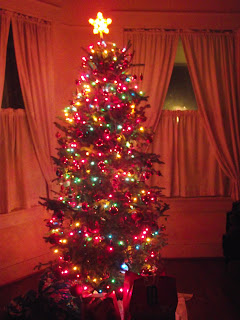 Christmas PRESENT? This was a different sort of Christmas Eve at good old Chaos Manor South, an empty nest sort of Christmas. The kids are all grown with lives of their own, and while we’ll see at least some of them before the holiday, or at least the holiday season, is done, on Yuletide Eve it was just me and Miss D., and it was quiet. Too quiet.

And maybe that is what brought on a more melancholy or at least more introspective Christmas Eve blog this year. Quiet is nice however, and Miss Dorothy, now a cancer survivor, still needs large portions of r-e-s-t.

Unk? A little Yell—fie on the eggnog—a cat on the lap, and my annual viewing of A Charlie Brown Christmas. By the time that was over and I’d done a wee bit o’ channel surfing, it was getting on toward 8pm. Which meant old Orion would be high enough to see from the front porch. If the weather was still cooperating.

The weatherman was predicting plenty of rain for Christmas Day, but at sunset it looked like my traditional Christmas Eve viewing of M42 might be a go, barely, for the first time in several years. I put on a jacket, grabbed my trusty StarBlast, and headed for the front door.

And you know what? Despite the weather goobers' dreary predictions, M42, that greatest of all Christmas ornaments, was there, drilling through the light pollution, bringing with it memories of the 46 Decembers I have spent in this wonderful pursuit of ours. The coming year promises to bring much change with it, but I can't help but think and hope--this is the season of hope, isn't it?--that given this good omen me and mine and you and yours will have a wonderful year.

In simpler words? MERRY CHRISTMAS EVERYBODY!

Comments:
Merry Christmas and a Safe Holiday Season to you, Miss Dorothy, and all the readers of this wonderful blog!

And a wonderful Christmas to you.

Merry Christmas to you both. Blessings to Miss D. I am so glad to be back to learning all over again. I get my new scope Monday.
Rickie Rainwater

Merry Christmas to Chaos Manor South and all of the folks at sct-user. This was a poignant blog Rod. While I too don't get on with religion I do believe that this season is about family and connections. This one was the first and, hopefully, last Christmas I am spending alone. My daughter is spending Christmas with her mom and my folks live way down your way with me up here in the frozen, snow-blanketed North. So it is quiet.....way too quiet. Least I had this blog to read...thank you for all you do Rod and I truly hope 2011 brings good fortune to all.

Merry Christmas to you Rod.

Yes, the eclipse was also a very spiritual one for my wife Joanne and me :o)

Happy New Years and best wishes to you and to Mrs. Dorothy. Have a great what's left of this Holiday Season and we'll keep on reading your blog.

like your blog happy new years to both of you.