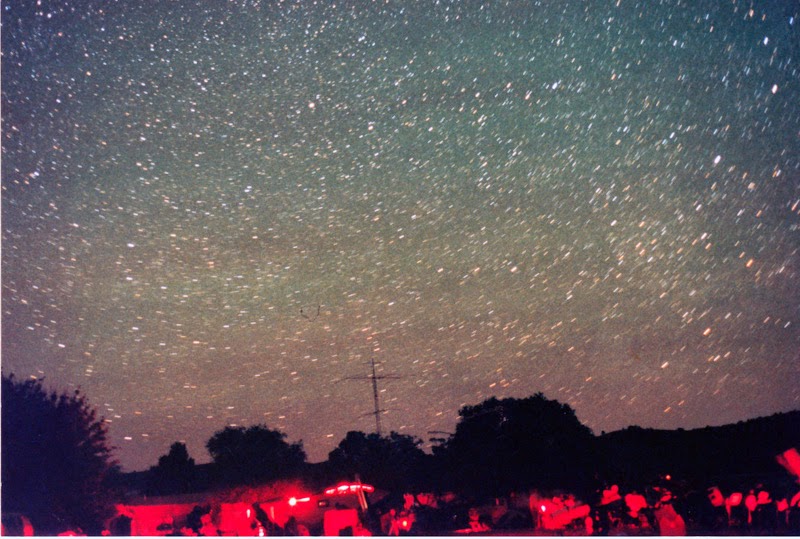 Only one thing remained on our agenda: a tour of nearby McDonald Observatory. Not only was visiting both the modern telescopes—like the gargantuan Hobby - Ebberly—and the historic instruments fun, the drive up the mountain was exciting, to put it mildly. An old-fashioned cowboy right out of Zane Grey “helped” by his dog drove us up in the most cantankerous jalopy of an old bus I’d ever been on. Naturally, we paid a visit to the Observatory gift shop for goodies before bracing ourselves for the trip back down to the Ranch.

And, suddenly, the end was nearing, dangit. Saturday evening brought the huge TSP raffle, the Great Texas Giveaway. There were tons of prizes from Nagler eyepieces to a portable observatory tent. Even Unk, who never wins anything, came away with a Milky Way print by David Lee. Then it was time for one last journey to the stars. 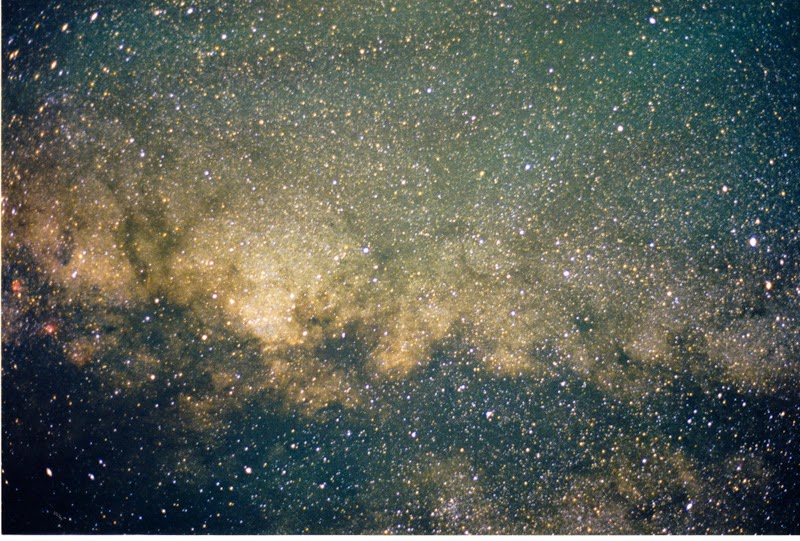 Like everybody else, I was exhausted from nearly a week of hitting it hard every single night, but on I pushed, nevertheless. By midnight, however, I knew Big Switch Time was approaching. There was the beginning of that fearsome drive home to face on the morrow. The great goddess Urania seemed to agree, as clouds moved in at 1 a.m. “That’s enough sky for this year, Unk. I’ve given you all I have to give. Now, go to bed and leave me alone for a while.” And so I did.
Passing under the “Vaya Con Dios” sign as we quitted the ranch Sunday morning, Dorothy and I promised ourselves we’d make it back to the TSP as soon as we could, which turned out to be in 2001, another spectacular year. Which was to be our last TSP for a while—we've actually never made it back—but not our last forever, I hope. I intend to do the big star party at least one more time before I am too decrepit to face traveling across the Lone Star State with a ton of astro gear. Maybe not next year, but the year after for sure. I have to, you see, because in 1999 I learned that the stars at night really are big and bright deep in the heart of Texas.
Nota Bene:  You can see more pictures from TSP 1999 on Unk's Facebook page...
2018 Update:

When it comes to observing, at least, I have never had a better star party experience than I did that spring week at Prude Ranch nearly (can it be?) twenty years ago. Oh, there were other years after that, but none quite as memorable.

Have I been back to TSP? Will I be back to TSP? It's been a long time now, and while I've occasionally contemplated another trip west, that has yet to happen. In part because I'm just not a fan of long car trips in these latter days. Oh, I could fly out, but what fun is TSP unless you lug a ton of gear with you?

Also, as is only natural, I suppose, I hear there've been some fairly substantial changes happening with TSP.  Natural,  yeah, as one generation passes the torch to the next. But I guess I fear today's star party just wouldn't live up to my memories of glorious 1999.

Comments:
Rod, you captured the essence of this star party so well, from the dust to the burritos and the horses naying with the onset of dawn. It was if I was transported back there. Thankyou. Now to check to see if TSP'15 has opened for registration yet, lol.

Rod, the TSP in 1999 was my first year going and the last my father went. He passed away in 2000. You reminded me of some wonderful memories!! I still have my t-shirt from the even and wear it to this day even though it is very faded! Thank you for sharing.

Well, thank you Katherine! As for TSP, I've often thought about going back...but...a look at their website seems to suggest that some things have changed. The world, I guess, has moved on, and maybe it's best to just be content with my memories. :)