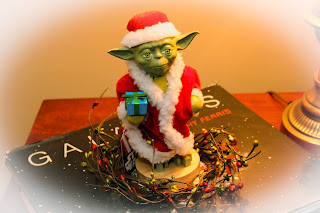 Got some Christmas money burning a hole in your pocket? Want a groovy new astronomy toy?  I may have just the thing for you, the Universe2Go from Omegon in Germany (available through Amazon.com in the U.S.). Actually, calling it a “toy” doesn’t quite do it justice, though that word does hint at the fun built into it. The U2G may, however, be more than just fun, it could be the start of something big, the first real personal planetarium. Before we get to that, however, let’s have the trad report on Christmas Eve ‘round these parts.

There’s not really too much to tell, actually. If you’ve glanced at the Weather Channel, you know my part of the country, the Gulf Coast, is being pummeled by intense thunderstorms and rain. Not the sort of weather that encourages you to get out and battle the crazy Christmas Eve traffic even if you can find a restaurant open post lunch. So, ‘twas a quiet evening at home with a glass or two of red wine, A Charlie Brown Christmas on DVD, and Jessica Jones on Netflix (quite a combo, I know). There was not a prayer of getting my traditional Christmas Eve look at M42. The only observing I was able to do, or had been able to do for days, was of the virtual sort.

Virtual observing with the Universe2Go, that is. What is that? It is the logical extension of one of the more popular features of smart phone/tablet astronomy apps, gyro-accelerometer “tracking” of the sky.  You know, go outside under the night sky with your phone or tablet, start SkySafari or one of the many other apps that has this feature, hold the widget up to the night sky, and enable tracking.  If everything is as it should be, the virtual sky will display the stars and constellations of the real sky before you. As you move the phone across the sky, its virtual sky changes to reflect your movements.

Pretty neat, and useful too. Many’s the time that I’ve used this feature of SkySafari to identify a star or planet at dusk. It is the near perfection of the idea developed by Meade and Celestron some years ago with their standalone MySky and SkyScout devices, and it is also the reason those products are no longer with us. The sky-tracking feature of cell phone astro-apps made the hardware “personal planetariums” obsolete.

What if you took this idea one more step, though, combining something like the MySky with the tracking feature of astro-apps? That’s what Universe2Go does. And in a very simple way. What it is at heart is a simple plastic box. Or maybe a better description is a Viewmaster Viewer—if like Unk you are old enough to remember those old kids’ 3D slide viewers.

Instead of a slide, though, you insert your smart phone into this viewer with the Universe2Go app running, and, thanks to the viewer’s beam-splitter arrangement, you see the app’s stars, constellations, and deep sky objects seemingly projected against the real night sky as you scan across it in binocular fashion. Even better, thanks to the fact that you are looking at two images, one projected for each eye, you can view the apps stars and DSOs in 3D if you wish.

The Universe2Go hardware viewer is clever enough but hardly revolutionary. What makes this thing go is the application that comes with it. While it still has a few rough edges—it locked up on me once on my iPhone 6s—it is capable of fairly amazing things, and if the people who make U2G continue to develop it, I believe it will become truly revolutionary, the ultimate personal planetarium.

What can it do now? It can operate in numerous modes, including “beginner,” an introduction to the night sky, “mythology,” which outlines the stories in the sky, and “deep sky,” which highlights deep sky objects. There is literally hours of narration to go along with the visuals, and that is well done by a female narrator who, while evidently not a native  English speaker, almost made me think she was. I enjoyed listening to her tell me all about the bright stars and the planets and the constellation figures, but being a deep sky hound, what I really was anxious to try was the U2G’s Deep Sky Mode.

In the deep sky mode, little thumbnail images of the brighter objects are sprinkled amongst the stars and in their proper positions. Let me tell you, it was quite a trip to scan across the night sky, see the constellation lines projected before me, the stars labeled, and DSOs invisible to my naked eyes appear as small pictures. It got even better though. 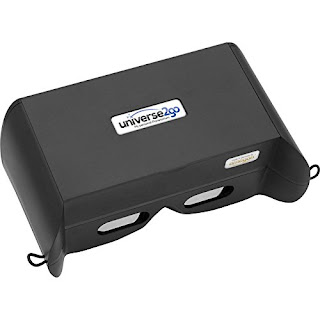 Stopping on one of the 150 objects that have images associated with them and selecting it (more on that below) enlarged the little fuzzy to a big, beautiful picture floating before my eyes, and I was then treated to a narration giving the object’s vital statistics. While I ran across a few minor factual errors in that narration, they were relatively few.

You don’t need a clear night to enjoy a deep sky tour with the U2G; this mode (like the others) is almost as much fun to play with in a darkened room—which is what I did most of the time since the moment the U2G arrived so did the clouds (I hope to do more extensive outdoor testing soon).  While only 150 DSOs have images to go with them, the entire Messier and NGC are there as symbols.

Whether I was just scanning across the constellations or homing in on faint fuzzies, I had a ball. I won’t say using the U2G was quite like sitting under a planetarium dome, but it was the next best thing, and maybe the closest thing to it if you don’t have a Zeiss dumbbell projector in your living room.

Is the Universe2Go an unqualified success, then? No, but what is? The down-checks come in two areas, the first of which concerns set up. Before the U2G can do any of its great things, you have to get it going, and doing that is not quite a simple as just opening the hatch in the viewer, popping your phone inside, and closing the plastic door. While not tremendously difficult, installing and aligning my iPhone 6s in the U2G was not exactly a walk in the park either.

The initial challenge you will confront is installation of your phone in the viewer. To begin, you will likely need to remove your phone from its case, since otherwise it will be too thick to allow you to close the door on the viewer, and the phone will not be held firmly in place. How much of a hassle removing your phone from its case before every use of the device is depends on the case. For me, getting my iPhone out of its Otterbox was a pain, but that is not the fault of the U2G. 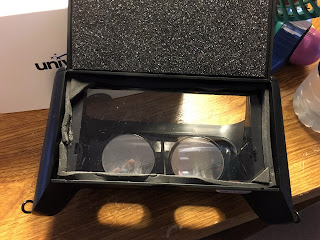 Next, you have to ensure the phone is held snugly in the viewer. Since the viewer is made to accommodate a fairly wide range of iOS and Android smart phones (excluding big ones like the iPhone 6s Plus and the Galaxy Note), you have to use included die-cut, self adhesive weather-stripping-like foam material to hold your particular smart phone securely in the viewer’s top compartment. The foam material is cut in rectangles and triangles, and at first it looks as if it will be easy to use. Not so. I found getting the foam properly pasted down a pain.

I was able to find a set of foam pieces (one rectangle and two triangular shapes) that did a good job of holding my phone in place and positioning it squarely with regard to the viewer. Unfortunately, getting the pieces correctly permanently positioned wasn’t easy. Oh, they stuck to the plastic well—too well. Touch an adhesive surface to the viewer and it was stuck but good and could not be re-positioned without tearing it. Nevertheless, after some cussing I was able to get the foam arranged, more or less.

How could phone installation be improved? There is a relatively small number of phones people will use with this device, and my suggestion is that Omegon offer the U2G tailored for each particular smart phone, with foam specially designed for a given model already installed.

When you have that darned foam in place, you fire up the application on your phone (you download it from iTunes or Google Play; it’s free with the purchase of the U2G and is activated with a code found in the box with the viewer). You still aren’t ready to start having fun with your personal planetarium, though. Next step is calibration, making sure the images seen in the viewer with your two eyes merge.

That brings us to the U2G’s other major annoyance: the way you move a cursor around onscreen and access and select menus. Your phone is in the viewer and there is no way for you to touch the screen or push a button. Instead, you navigate menus and do the calibration using your phone’s gyro/accelerometer. 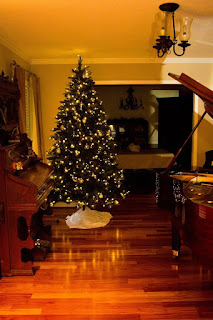 A combination of nodding your head up and down and tilting it from side to side moves the cursor and enters selections. In the beginning I found this well-night impossible to do, and didn’t think I’d ever manage to complete the calibration—which involves nodding and tilting your head till two bull’s-eye targets merge. I was just about ready to quit after my fifth attempt when I finally caught on to how to move my head, finished calibration, and was soon flipping through menus and finishing the device’s simple setup with fair ease.

By the time I finished setting up the U2G, I was in something of a snit, but as soon as I began zooming ‘round the night sky indoors and out, all that went away. This thing truly is remarkable, especially if you, like me, have always wanted a home planetarium that’s a little better than a darned old Spitz Junior. It is really rather breathtaking as it is, and, again, if the people at Omegon continue to work on their app I believe “breathtaking” will be too mild a word.

There’s but one final impediment to having a virtual planetarium at your beck and call day and night via the Universe2Go:  the price. The U2G will set you back nearly one-hundred dollars. Is it worth that much? That depends on you. The ground truth is that you can get a far more capable and detailed planetarium program—far more detailed—SkySafari Pro, for half that amount. And how much is that plastic 3D viewer box really worth? You will have to decide that for yourself, but I will say that when you’ve got the U2G working you will be flat out astounded at how cool it is. SkySafari is beautiful, and useful, but U2G is just so much fun.

Up in NY we haven't had a clear night since Xmas until tonight....it's a cool gadget but I don't find it too accurate. The initial setup star is never close and subsequent "GoTo's" are way off. The bigger problem is that their website (or the company) is down....it's the only place you can get answers to the myriad of questions i have.