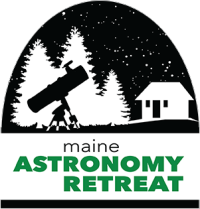 Well, cats and kittens it's that time again. What time? Star party time! The opening of the late summer/fall star party season brings with it my Annual Road Tour. First one I'll be speaking at is the Maine Astronomy Retreat, which will be underway as you read this. I hope to maybe do some brief reporting from the scene, but don't expect too much in the way of a blog for a couple of weeks (Maine is followed closely by Wisconsin's Northwoods Starfest).

So what's an Astro-blog deprived astronomy maniac to do? Look to your left. Hard as it is (for me) to believe, this blog has been rolling along for ten years now. There's plenty of stuff you might have missed. Some silly, some misguided, but mostly fun, anyhow.

Off to central Oregon for a 4 day SP on the 4th. (no not the OSP, but a Rosecity Astronomers one)