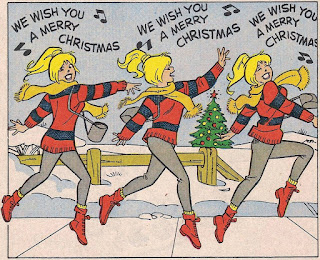 Merry Christmas, y’all! This is gonna be a short one tonight. You see, I screwed up. Bad. I thought I had everything ready for Christmas: a nice turkey, the ingredients for my (justly) famous giblet gravy, sufficient side items, bread pudding, and the components for my insane bourbon sauce. Yes, I was feeling good. Not stressed out at all.

Until yesterday afternoon: “Oh, my God. I forgot to move the turkey from the freezer to the refrigerator!” The bird would take four days to defrost in the fridge and I only had two left. What would I do? What WOULD I do? The answer was, “You’ll get up a 2:30 in the morning and defrost it in cold water.” So that is what is gonna happen tonight, campers.

After a couple of years of being skunked badly, tonight looked to be reasonably clear. Given my early wakeup call, I didn’t want to fuss with a big telescope, so it was my beloved SkyWatcher 3-inch f/11 refractor that got stationed in the backyard as I waited for the Hunter to get up off the horizon. Yes, early on the sky just looked great; it was a lovely blue at sundown. Surely, I’d spend the late hours of this most wonderful of nights admiring the winter jewels with my little telescope.

Alas, ‘twas not to be. While waiting for Orion to get nice an high, I spent about half an hour in my shop, the vaunted Batcave, talking to a friend of mine on the phone. When I came out around 10:00, not only was the refractor sopping wet with dew, fog, dense fog, had moved in, and the sky was like cotton batting.

I hope you were able to see more than I was on this most numinous of evenings, but don’t worry about me. Despite being skunked astronomy-wise for the third year in a row, hope springs eternal in my heart. Someway, somehow, it will be a great Christmas and a great year despite everything. A year when your and my hopes will somehow be realized.

As I sat in the den half drowsing after I got up at 2:30 a.m. to begin defrosting that darned bird, I recalled a few things I’ve been meaning to mention to y’all…

This is sorta like a return of the old “Rumours” column in my ancient newsletter, Skywatch (you can read over ten years of back issues here if you are interested). Maybe I will do this every once in a while, when I have little items to share that don’t fit anywhere else (like the long, long-running “Strays” in QST magazine).

The first of these things is that, as I mentioned last time, Steve Tuma is discontinuing sales and support of his Deepsky software. That has turned out to be happening a little quicker than I imagined it would, with the program’s website already off the air. Steve has mentioned in his Yahoogroup that he does have a few DVD sets remaining. He also says he’s open to the idea of allowing someone to post the program’s zipped files on a server. Contact him at stuma@comcast.net.

Another new Celestron mount? It appears so, the CGX-L. This is apparently a replacement for the CGEM DX. It is the CGX (which replaced the CGEM) mount with a CGE Pro tripod, a heftier counterweight shaft, and an extra Aux port. I say “apparently” because as soon as someone noticed a webpage on Celestron’s site announcing the new GEM and spread the word on Cloudy Nights, the webpage and all other Celestron mentions of the L vanished from their site. CN also soon deleted all the threads about the CGX-L.

Is this going to be the replacement for the CGE Pro as well as the CGEM DX? I’m not sure. I’ve long thought Celestron would get rid of the Pro. Why should Synta continue to produce two mounts with similar capabilities, the CGE Pro and the EQ-8? I was thinking the “new” Pro would be an EQ-8 with servo motors and a NexStar hand control, but you never know.

UPDATE:  Somebody archived the CN thread and Celestron's web page about the new mount and made this video, which is rather illuminating. Given what's here, I am rather convinced that the CGX-L is the new CGE Pro. Why Celestron removed the page, and why CN deleted the threads, I haven't a clue.

Comments:
Hi Rod, fellow mobilian here, followed your advice on telescope purchase and con'd the spouse into getting me a fine Christmas gift. My first real telescope showed me a pretty view of m42 last night from midtown. Looking forward to finding clear skies, thanks for all the knowledge you've shared and keep up the good work!

And a Happy Christmas and New Years to ALL...

Happy Holidays to you and yours, we appreciate your articles and insights and look forward to seeing them continue, Howard