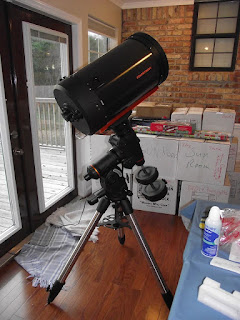 One more then, my friends, one more, a CGEM mount. I have absolutely loved using this Celestron German equatorial, but with my back twinging today, I know I have to let it go the way of the Atlas. If you've been following this saga on Facebook and here on blog, you know that after an accident, a fall, I had three years ago, I began having intermittent back problems. They come and they go, and one thing I have learned is not to aggravate them. Especially by lifting 40-pound GEM heads onto tripods.

Case in point? Last week, I was testing my Atlas EQ-G, which would be the first piece of "too heavy" gear to go up for sale. I was careful while putting it on its tripod and all seemed well. I had a lot of fun taking pictures with the mount, and had almost convinced myself to hang onto it. Until, when I was disassembling the Atlas after three days in the backyard, I--yep--aggravated my poor back again despite my caution. I knew then that both the Atlas and the CGEM just had to go.

As for the current item, my CGEM, I've had a lot of fun with it in the couple of years I had it and will miss it. The mount never failed me, never prevented me from doing what I wanted to do in video, visual observing and long exposure deep sky imaging. You can read about some of our exploits here and here. Certainly I'll be sorry to see the mount go, but I plan to, as I mentioned a while back, replace it with a lighter GEM with a similar payload capacity.

Anyway, the CGEM is just over two years old and includes the standard NexStar hand controller, a DC power cord, AND the optional (and not exactly inexpensive) 5-amp Celestron AC power supply. The counterweight is the single 17-pound job normally included with the mount, but any CG5/Synta type counterweight will work on this mount. 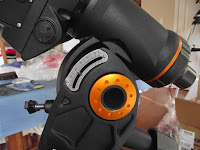 Like most NexStars, the CGEM has outstanding goto accuracy. It also guides very well. Until my back began to discourage me from using it, this was my primary astrophotography and visual mount. It carried a C11 or a 6-inch f/8 refractor without a problem. Notable is that the mount was tall enough that my f/8 refractor never threatened to bump into a tripod leg no matter where I was pointed in the sky.

This is priced to MOVE at $800.00, little more than half its price two years ago. Like the Atlas, this is a PICKUP ONLY item, but, as with them, I am willing to drive a reasonable distance to meet somebody--New Orleans, Montgomery, Pensacola, Panama City, etc.

Please note that the TPI spreader shown in some of the pictures is NOT included. I have moved that to my AVX.

Oh, one last thing to add to the pile of loot. I've realized that after I sell the CGEM, I'll have no further use for my ADM Vixen to Losmandy adapter, so that goes with the mount too.

If you're interested, the best way to contact me is via Facebook Messenger. I do still monitor my old email addy at rmollise@bellsouth.net, however... If you think the CGEM might be just the thing for your observing program, I urge you to contact me without delay. It won't, I presume, last at this price.

Comments:
Goodbye Big Bertha, I truly enjoyed reading of your adventures with Uncle Rod, gone but not forgotten...

How about your little C90? Although I don't use mine, I can't let it go. You never know if I'll pop it on a tripod for a quick look at Jupiter or the moon someday.

I'm hanging onto the 90, which is handy for airline travel, etc.

Blog entries 3 weeks out of 4. Are we back in the saddle again???? My Sunday coffee just isn't the same without Uncle Rod.

Kinda-sorta. :) I will skip this Sunday...HUNTSVILLE HAMFEST time! :)

My C90 is going for a walk on the 21st. I live on what we call a hill in Oregon, but at 600' some places would call it a mountain. Portland is only going to be 99% for the eclipse, but with over a million visitors I'm staying home.

Have a solar filter for the C90 and a 64X ND for my camera. The C90 (since I've even walking to the park) is the only scope I'd carry. Taking a CF tripod with a very small video head to mount the c90 on.

I think the real adventure is not the eclipse, but what the roads will be like the day of and the day after:)

Hi Rod - sent you a FaceBook friend invite. I've picked up a GPS C11 SCT a couple of months ago and plan on doing a little AP as time permits. I'll text you my cell number so we can talk about the CGEM you've got for sale - it might just be sold...

Thanks, and thanks for your wonderful blog!

Hi William...alas, that CGEM went to a local person hours after I offered it for sale.

Thanks for another great blog. Even though I'm not an imager, I love reading about the exploits of amateurs in all aspects of astronomy. And, of course, sharing the thrill of opening and playing with a new "toy".