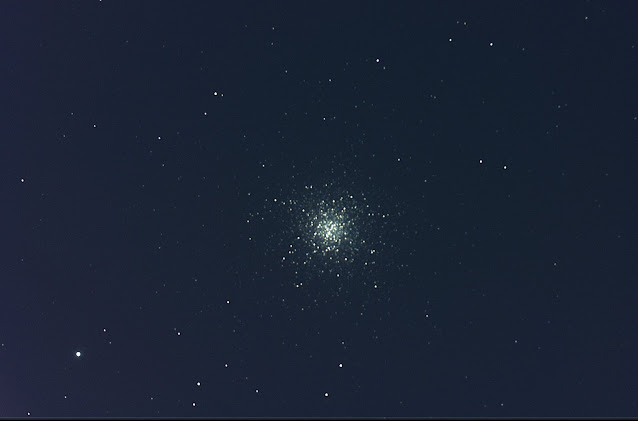 Yep, better late than never, I suppose—I got it done anyway. Finally.

The whosit and the whatsit?! What in the aitch-e-c-k is your silly old Uncle Rod talking about now? My yearly M13, muchachos. As those of y’all who’ve been here a while know, I have two astronomical traditions I’ve stuck with through thick and thin: Every Christmas Eve I view M42, and some time over the course of a year I take a picture of M13, the Great Globular Cluster in Hercules.

In recent times, catching M42 on Christmas Eve has been dicey. The weather has been increasingly crazy over the last decade or so, and we are now as likely to have thunderstorms, or hail, or snow on Christmas Eve as we are to have clear skies down here in Mobile, Alabama (for you blog old timers, that’s “Possum Swamp.”). Now, M13, that is easier. It’s in the sky for an awful long while over the course of a year. All I have to do is work up the gumption to get out with a telescope and a camera and give it a go.

Which didn’t happen this past year until September for reasons you can read about here. Yeah, 2019 had been one heck of a year, but I still intended to get at least a snapshot of the old grandpappy glob before the annum ran out. If I needed any additional impetus to get a scope into the backyard, that was provided by a Sky & Telescope Test Report assignment; this time on Meade’s new medium-weight German equatorial mount the LX85.

I’d been curious about the LX85 for the last couple of years, but hadn’t heard much about it. Which seemed strange. While the mount’s predecessor, the LXD75, hadn’t been perfect, it had plenty of fans. Many of whom I thought would flock to Meade’s new GEM after years of the company not offering a mount in the LXD75/Advanced VX class. Had all the LXD75 users jumped ship for the Celestron Advanced VX? Was there now too much competition in the sub-1000-dollar mount arena for Meade to stir up much interest? Was there something wrong with the LX85?

I was excited when two big boxes arrived from Meade—I always am when new gear is at my door. But I was feeling a mite skittish. It’s been no secret the current iteration of Meade has had its ups and downs quality-wise. Would a good-quality mount for this modest price (the 85 is currently about 700 bucks at many retailers) be too much to ask?

Those two boxes were duly manhandled into my usual staging area, the Sun Room, in short order, and I dug in. One contained the mount and its tripod and the other a Meade 8-inch ACF Schmidt Cassegrain OTA. While the Test Report had originally been intended just to address the mount, my editor, Sean Walker, and I put our heads together and decided a review that included the SCT OTA normally shipped with the mount might be of interest to y’all. 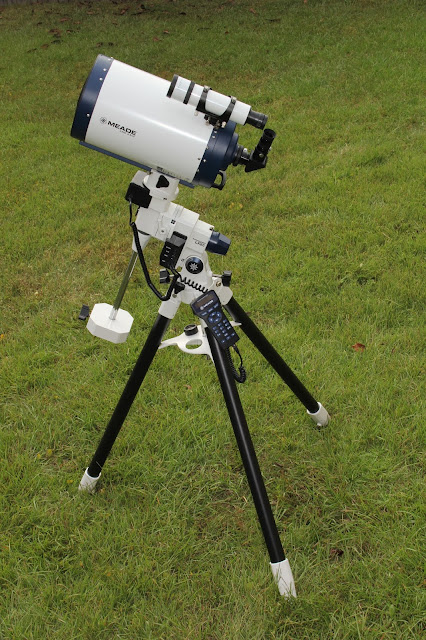 Anyhow, the first thing that struck me? I’ve seen recycled cardboard, but the box the mount came in was recycled to the point where it seemed ready to crumble. Everything was in one piece, but just barely.

Out of that box came a tripod not much different from the usual Chinese 2-inch diameter steel tripods we’ve become accustomed to since most of our gear began to come from the Far East. There was also a tripod spreader (an oddly curved affair). And there was the mount head of course, a really pretty mount head finished a gleaming white. Finally, there was a white, oddly shaped octagonal counterweight of about 13-pounds, a CD containing Meade’s Autostar Suite software, and a distressingly thin but sufficient (barely) instruction manual.

Well, alrighty then! Let’s get this puppy on the tripod. There were no surprises there. Everything went together pretty much like an LXD75 or an AVX or a CG5. The white-tubed OTA went on the Vixen style saddle without a hitch. Sure looked pretty, I had to admit. Next step? An indoor fake alignment. I like to power a mount up indoors, enter correct date/time/location, and send it on gotos to objects. I can generally tell everything is basically well if the scope is pointing in roughly the correct directions. At this point, alas, Murphy threw a monkey wrench into the works. No matter how I searched through the boxes and packing materials, all of which I was careful to preserve, no power cord did I find.

I was irritated, but figured it wasn’t a big deal. I had numerous spare DC power cords in my inventory here including some from Meade; I’d just fetch one of those. I did, plugged it into a jumpstart battery pack and into the scope. No dice. The mount’s power connector was slightly different from those on older Meade mounts. The cable I had just wouldn’t make a good connection.

A call to Meade got their AC/DC power supply on its way to me, but I’m still not sure what the problem was. Is the DC power cord an extra option (that would seem strange) or was it just omitted from the box by mistake? When the power supply arrived a few days later, I proceeded to give the mount that indoor fake-align checkout. The LX85 seemed to work as it should. Next up? The good, old backyard.

While we’d been enjoying a surprisingly dry fall, naturally the arrival of the LX85 brought considerable clouds and rain. When we finally hit a clear (but substantially hazy) spell, I figured time was a-wasting and got the mount and the ACF OTA set up in the back forty despite the presence of a fat old Moon in the east. The results? Read my Test Report, but I was satisfied enough with the LX85 that I didn’t hesitate to set up for a photo run on the next evening.

On that night, the first thing on the agenda was an accurate polar alignment. Which I accomplished with the wonderful software, Sharpcap. Sharpcap is an imaging program that is as capable of taking long exposure deep sky shots as it is planetary closeups. What I was interested in on this night, however, was its polar alignment tool, which makes dead-on polar alignment a snap.

I’d mounted my 50mm guide scope and QHY guide camera on the scope. With Sharpcap’s polar alignment tool running, the program used the guide camera to display plenty of stars in the vicinity of the North Celestial Pole, and gave onscreen prompts as to how I needed to move the LX85’s altitude and azimuth adjusters to get the mount’s RA axis pointed right at the pole. In just a few minutes I was only arc-seconds away from a perfect polar alignment. If you are serious about astrophotography, an exact polar alignment is a big help and maybe even a necessity. Do yourself a favor and check out Sharpcap.

Polar and then goto aligned with a Canon DSLR on the rear cell, I sent the scope to M13 and got to work. I brought up that wonderful program, PHD2 guiding, selected a guide star in the field of M13 (I’d only had to move the mount slightly with the AudioStar to center the cluster when the goto completed). I picked a star and let ‘er rip. I didn’t want to waste time fiddling with PHD’s many settings—who knew when those blasted clouds might return?—so I just stuck with ones that worked with my Celestron Advanced VX.

That was just fine. Without doing any tweaking, the auto-guiding was more than good enough to yield round stars in a 1-minute exposure. How about a longer shot? Maybe 5-minutes? The mount was behaving OK, but I was skeptical—an SCT sure brings a lot of focal length to the table. 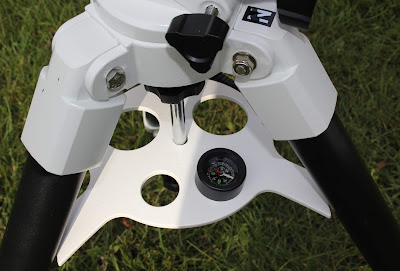 No prob. The shot isn’t perfect as you can see here. The haze and the Moon alone saw to that. The stars are good and round, though. Also, while I’ve certainly taken much better pictures of the Great Glob, this one is kinda special. It was my first astrophoto after a long layoff, not just from picture taking, but from observing of any kind. It was nice to get back in the saddle. And I had also completed my yearly quest for an M13 shot of some kind.

As I said in another recent blog entry, my feeling as I was shipping the Meade gear back to California was “Man, things sure are looking up for ol’ Meade. They really are still in the game.” Ironically, it was only a few days later that I learned Meade had declared bankruptcy yet again. I hope Meade pulls through, and if they do, that they see fit to continue the LX85.

Since y’all responded so positively to my question here and on Cloudy Nights as to whether you’d like to see me bring the blog back on an at least semi-regular basis, that’s just what I’m a-gonna do. The next one is already in the works, and there may be a new observing series forthcoming shortly after that. Well, after it warms up down here in the currently frigid heart of Dixie, that is!

Comments:
Thank You Rod!!! It's a thrill seeing you're back up and going.

I also read the S&T Test Report. I too hope Meade keeps producing these products. Thanks as always for the nice read, and I'm looking forward to your new books!

The LX85 looks good and light

While the LXD75 mount definitely had its detractors, many users, myself included, were quite pleased with it. I switched to the 6" Newtonian LXD75 in 2007 after giving up on my 10" LX200 for astro-imaging (that damned, horrible wedge!).

The LXD75 was great -- easy to move around, easy to use and it could, if aligned properly, provide good enough tracking for 120s to 300s subs. I went from a DSI Pro to a Starshoot Pro to a modified DSLR on the LXD75 mount. But when it finally died in 2018, Meade was a mess, the LXD85 was promised but not yet available, and, like a lot of other people who wanted to image, I purchased a Sky-Watcher EQ6-R Pro.

I've been thrilled with the EQ6-R Pro and with the ZWO ASI1600mm Pro and APO triplet I purchased shortly after buying the EQ6 (in for a penny, in for a Krugerrand ... or three).

Still, I'm happy to see Meade at least somewhat back in the game and I have heard positive things about their new APOs. Hopefully, Meade can resolve its problems. I'd hate to see such an iconic brand disappear.

Also good to see you back to semi-regular posting, Rod. Clear Skies!

I've followed your blog off and on for years and I enjoy it very much.

I'm a writer and editor in Calgary and wanted to let you know I think you are a very good writer. Your writing is detailed, funny, humble, and very knowledgeable. And the greatest thing I admire, you're down-to-earth and very approachable. It seems you know who you are and are very comfortable in your own skin. This really comes out in your writing.

There's lots of astronomy blogs out there with lots of great information but some of the writing is not the best. So, every few months or so I'll wander back to your blog and read some of your postings, both for information and for pure enjoyment.

I hope you're doing well, and can continue writing for many years.