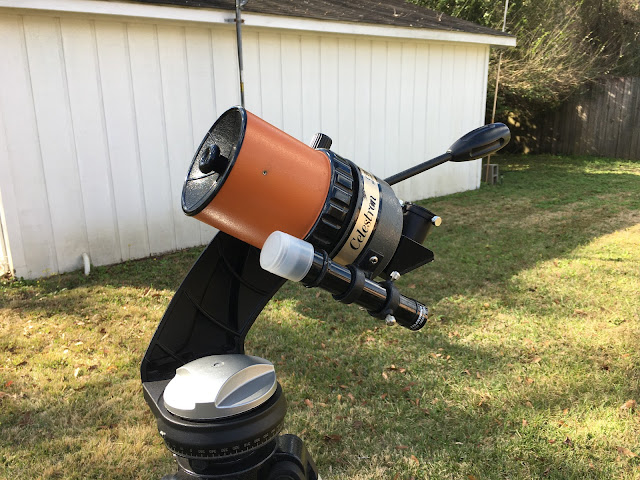 All I can say is “Merry Christmas, muchachos.” I know I’ve been remiss about getting new blog issues to you over the last couple of years. That did improve some this year, though, and I will see to it that continues into the new year. I am planning a series, in fact, on the Losmandy GM811 mount, which, despite it having been out for several years now, many are still curious about.   And, no, I haven't forgotten The New Herschel Project, my quest to observe the Herschel 400 from my modest backyard.

But that’s next year. How about this year? How about now? Even in the sparse years, 2019 – 2020, for the little old blog from Possum Swamp, I have always managed to get the Christmas Eve edition out. And so it is this Christmas Eve in the strange and alien Year of our Lord 2021.

What exactly is going on at the New Manse here on the borders of the Great Possum Swamp this Yuletide? As you can imagine, it is a quiet Christmas Eve. Until the plague well and truly takes its last bow, no festive Christmas Eves like those of yore drinking Margaritas and eating fajitas at El Giro’s Mexican restaurant—though there is still an El Giro’s, which is barely two miles from Unk’s suburban digs. That will wait for next year (I hope).

What’s it like on this numinous day? Well, it don’t feel very Christmassy. Now, I don’t expect a white Christmas in the Swamp, but I do expect something with more of a Christmas feel than this. A glance at the weather station display in Unk’s radio shack shows it’s 73F outside and climbing. Whatev’. Unk will not let the cursed weather gods spoil his Christmas Eve.

You know what? In some ways, I’ve always preferred Christmas Eve to Christmas. There’s that wonderful sense of anticipation of wonders to come that maintains even in these latter days. And one of those wonders is one of your old Uncle’s astronomy traditions. To wit, my Christmas Eve viewing of that greatest of all ornaments, M42, The Great Orion Nebula.

So, what was up with that this Xmas Eve? In the days leading up to the glorious 24th, Unk had been purty derned sanguine, “Hell, why not get the GM811 and C8 out into the back 40 and get started on the articles about the mount?” But in addition to temps in the 70s and rising humidity, the weather had brought clouds. Not in overwhelming numbers at first, mind you, but they were flowing in from the southwest. So, the Losmandy, C8, and laptop might be a bit much. But which scope wouldn’t be a bit much?

My beautiful little C90, "Stella." I’d been thinking I needed to get her out of her case after the long, weary spell she’s spent in there. And she’s about perfect for a humid, hazy night where the light pollution is amplified and I only want to look at bright stuff anyhow. Under those conditions, her 90mm of aperture and f/11 focal length can surprise.

What’s the C90 story? If you want to learn about how Unk’s C90, a classic orange tube model from ancient times, came to him, take a gander here. But the C90 in general? It’s been a perennial with Celestron, whether the original California company, the Swiss-owned mutation, or the current Chinese iteration. In fact, the C90 is still around and popular today, as a stroll through a very long-running thread on the Cloudy Nights BBS website will show. A small and portable but capable MCT like the 90 is always useful. But there are C90s and then there are C90s.

Many have been the permutations of Celestron's little (Gregory) Maksutov Cassegrain. In addition to the orange tube, there’ve been black-tube models, chrome-plated ones, rubber armored scopes, and the current dirt-cheap (f/14) Synta version. It’s been a spotting scope, it’s been on fork mounts, it’s been sold with GEMs. And most have been good little telescopes. The optics, including those of the current bargain-basement model, have always been good—though you often hear the opposite about the original orange-tube models.

There is a reason for that, campers, and it has nothing to do with the telescope’s actual optical quality, but with its focusing method. You see, the earlier C90s don’t focus by moving the mirror forward and back like SCTs or the current Chinese C90. They focus by moving the corrector and secondary forward and back. You twist the front part of the OTA to focus, not unlike a camera lens.

That works well, but you have to learn to exercise a light touch, or you get terrible shakes. Especially since the temptation is usually to under-mount this small but long focal-length scope. Those “bad optics” are usually due to owners not being able to attain sharp focus due to the shakes. Mount the girl on a sufficient mount and you will see how sharp C90s can be. My own orange tube is dead sharp with excellent optics.

While most C90s have had similarly impressive optics over the years, my heart still belongs to the orange C90 She’s just so fricking pretty. And there’s that luxurious custom-made case. And the beautiful retro-style aperture cover. And amazing build-quality in general. Not that it's all gravy, alas.

The original telescope used the old Japanese Standard .965” eyepieces. Since you won’t want to mess with those if you, like me, acquire one of the original C90s, you have to rectify that one of two ways:  With an adapter called an “LAR,” a Large Adapter Ring, or with a hybrid .965” – 1.25” diagonal. I have an LAR and can even use 2-inch diagonals with the li’l C90, but most of the time there’s no reason to do that. My (Scopestuff.com) hybrid diagonal is just fine.

So, I grabbed the C90 case out of the sunroom closet where the astrostuff (sorry Rex) lives. And also, my SkyWatcher AZ-4 altazimuth mount, which is perfect for the little gal. However, to mount my spotter-heritage C90, which sports only a ¼-20 tripod block, on the AZ-4 I’d need a Vixen dovetail on the scope. I have one from Orion that has an integral 1.25-inch bolt for easy mounting to the OTA. But nowhere could it be found. I know I have it still—I saw it not long ago—but where?

While, as my loyal readers know, I’ve divested myself of a lot of unused astrostuff over the last six years, I still have a lot. Including a heavy-duty William Optics Vixen dovetail with a captive 1/4 20tpi bolt. Way overkill for a C90, but it would work fine. Slapped that on the girl, mounted her on the AZ-4, and out to the backyard Stella went to wait for darkness and for Orion, who, according to Stellarium, would be high enough for a look by 8:00pm.

There was no denying that by 2pm the scent of skunk was in the air. Clouds weren’t just flowing in; they were pouring in with the sky almost totally overcast. I didn’t stress out. It wouldn’t be the first time I’d been cheated out of my M42 on Christmas Eve. But the Clear Sky Charts was still predicting mostly clear.  Anyhow, if there weren’t even sucker holes by your old Uncle’s (increasingly early) bedtime, I’d just bring Miss Stella back inside, the work of maybe 5-minutes, one of the prime attractions of the little critter.

So, Unk settled in with a bottle of sarsaparilla to watch television with the cats and see what would happen. I peeped out at the sky every once in a while. By 6pm, it was looking a small amount better, and I actually got a look at Jupiter in a sucker hole. Naturally, the seeing was dreadful, but Stella had no trouble showing the equatorial banding on the disk and four Galilean moons nicely spread out on each side of Jove. Then the clouds came again, and back inside I went.

Finally, it was 20 hours local. The sky had opened up a largish sucker hole in the Orion area and it was time. Best look I have ever had at M42? No, of course not--the drifting gangs of clouds saw to that. But it was there. My little telescope was showing the wonder to me, just as my Palomar Junior had showed it to me many, many long Christmas Eves ago. The clouds came, and the clouds went, and it was enough.

What more is to be said? Have a wonderful Christmas everybody. These are tough times, but steady as she goes. I'll be back here again, soon. I promise!

Nota Bene:  Want some Christmas Eve Cheer in the old Chaos Manor South Tradition? This here is one of my favorites.

Nota Bene 2:  I appreciate all your kind comments. Unfortunately, the university email system pretty much prevents me from replying to them. Feel free to email Unk direct, however.

Comments:
Which televue eyepiece are you using in the picture of the C90?

Merry Christmas Unc! (and Stars Instead Of Cars is one of my favorites of your blog posts too)

A belated Merry Christmas and Happy New Year to you and yours. I just sold an orange C90 spotter for our club. It had the .965” eyepieces, image erector, star diagonal, and 5X24 finderscope. It was tempting but I have recently bought a B&L 4” on a fork mount so I regretfully let it go. It sold in minutes. I am glad you got your Christmas Eve M42 in. It has been in the -20’s and 30’s here with clouds so no viewing anything. I look forward to your 2022 blog entries and likely S&T article or two.....Dwight

A local rummage sale had an eye catching little brown case marked as $40. Inside? A beautiful C90, two eyepieces, barlow, etc. Snatched it up. Since added the 1.25" adapter to use my array of eyepieces. Still need a decent mount for it but it's a heap of fun. Goes well with my Short Tube 80, 10" f6.5 Dob and other toys.

Thank you for your terrific blog!

Rod, you might be interested to know that probably around the same time that your C90 was made, I was sent by Orion Telescope's owner Tim Gieseler to visit the Celestron factory as part of my job as Product Development Manager. I was impressed with the facility and especially with the "clean room" where they actually tested individual scopes from the line. I watched the tech align a C90 with a laser at *800x*, obtaining a testbook perfect Airy Disk.