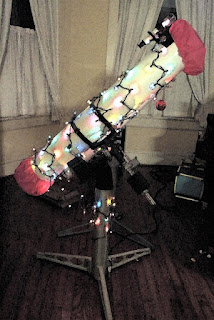 Well, muchachos, another Christmas Eve is upon us, and as usual I choose to spend it with y’all. Well, part of it, anyhow. In the wake of the covid, this was a more normal Yule's Eve for me and Miss Dorothy. As “normal” as it ever gets with your somewhat odd old Unk in the mix, anyhow. But, yeah, a little more like those grand Christmases of yore at Chaos Manor South. Oh, no little kids running the sainted halls, all excited by the imminent arrival of St. Nicholas, but more normal than it’s been, nevertheless.

In witness of that, I hoped we could take our Christmas Eve luncheon at El Giro's Mexican Restaurant, just as we used to all those long years ago (it seems strange to say that, but, yes, those days are 25 years or more up the timestream, though it doesn’t feel like it). Anywho, that's what Unk planned, El Giros, the new El Giro's out here in far west Possum Swamp.

Ma Nature had different plans for Unk as she often does, though, plans in the form of a screamer of a winter storm named "Elliot" (when did they start naming winter storms?..musta missed that).  We did make it to Whataburger for the Mobile Amateur Radio Club's weekly breakfast. I am the president of the club, so I figgered it was incumbent upon me to face the elements (to the tune of 24F) bravely.
After arriving back at the New Manse and thawing out, I decided lunch at home would be just ducky. That was OK. Like many other things post-covid, I suspect El Giro's might not be quite the same, anyway. I still hope to find out sometime soon.


Be that all as it all may be, back home, I ruminated on Christmases Past. Not those at Chaos Manor South, but those of long, long, long ago. Christmases I’ve recounted in this here blog a time or three. Two of those reminiscences, I think, sum up my feelings about this most numinous time of year better than anything I could write on this Eve:

“Stars Instead of Cars”

Unk puttered about the place the rest of the afternoon. While it was comfy up in the main house, out in the radio shack, aka "The Batcave," the little heater struggled to keep the temperature at around 65F.  But you know what? The cold made it seem a bit more like Yuletide than the usual Possum Swamp t-shirt weather does. While we can still have cold at Christmas, it's less frequent than when Rod was a boy. Hell, it's now getting rare for us to even have a hard freeze.  Unk spent the remainder of Christmas Eve day with a wary eye on the sky. Clouds had begun to roll in just after dawn to his dismay. 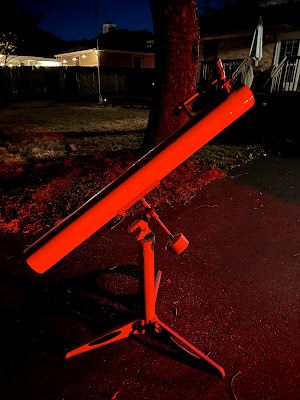 As A Charlie Brown Christmas wrapped up on TV (thanks to a DVD), I found myself growing drowsy—couldn’t have that!  I wasn’t at all interested in hanging out with any of those dadgum Christmas ghosts this year! I jumped up—badly startling the felines. I wasn’t gonna fall asleep and miss my Christmas Eve tradition.

That's something that’s been a constant over many years:  My Christmas Eve look at that greatest of all ornaments, Messier 42, the Great Orion Nebula. IF IT WAS CLEAR. Was it?  Unk poked his head out the Sunroom doors. Despite being assaulted by an icy blast that near-about blinded him with tears...it was obvious it was, yes, clear. Time to get about my business.

How would I look at M42? “Simple” would have been my 80mm f/11 SkyWatcher achromat. Given the insane temps, that would have been understandable. Understandable, but still The Way of the Astro-wimp. No. I would do it right, really right, for the first time in a long while. With my ancient and beloved Edmund Scientific Palomar Junior.

I had got my Pal outside in late afternoon before the cold and a few eggnogs sapped my will, as I was pretty sure they would. I am a lot older and weaker than I was in these days, and the Palomar Junior sure didn't feel like she'd lost any weight over the intervening six decades. Getting the heavy old mount and pedestal out the door wasn't a bit easier than way back when (Luckily, I didn't have to worry about bashing Mama's prized mahogany coffee table in the process!). I got the scope to a spot on the turnaround with a clear view to the east, just as I might have in days of yore.

And a Happy new Year!
I hope we’ll enjoy many more posts from you in 2023.

Just read this … Happy New Year and to revisiting the objects that captivated me 47 years ago! Alas my 60mm Tasco refractor is no more. Thanks for the post.