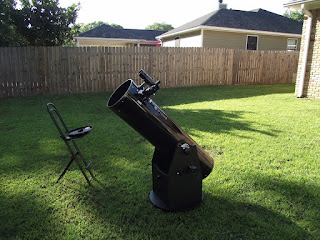 And, so, we find ourselves at the end of the Messier road. Don’t feel sad, though. While we’ve caught ‘em all here, if you haven’t seen them all with your own eyes and your own telescope, you have a huge adventure in store and I envy you. Even if you have observed the entire list, you, like me, will likely never tire of these beauties. Why not give the Ms another go? This is a great time to begin that; the fall wonders are still around, the winter spectacles will soon be riding high, and before you know it the multitudinous Messiers of spring will be on parade.

This actually isn’t the end of Messiers in the blog. Since I am mostly focused on bright and spectacular deep sky objects these days, you can expect another Messier series shortly. I won’t keep you in suspense about it, either.  The new articles will involve me viewing the list as John Mallas did for his and Evered Kreimer’s famous book, The Messier Album, with a 4-inch refractor. When will the series begin? That depends on a number of factors, not the least of which is the weather.

What will I see with my Celestron C102 compared to what Mallas saw with his 4-inch Unitron? Will my drawings even remotely resemble his sometimes-eccentric/fanciful looking ones? I actually did some observing along these lines some years ago, writing more than a few blog entries about the experience. At the time, however, I didn’t have a 4-inch refractor—I used a 5-inch MCT instead—so I think it will be fun to revisit the Messier Album with a scope more similar to what John used. I also plan to be more systematic this time, drawing every object John drew. If you want to follow along, I urge you to get this fine book. It’s out of print but easily available.

Messier 106, a bright (as galaxies go) Sb spiral galaxy in Canes Venatici, is one of the least visited and least appreciated M-galaxies. Why? I am not sure. While it’s large at 18’36” x 7’12”, it’s also bright at magnitude 8.41, and its intermediate inclination means its light is not badly spread out. Certainly, it’s a nice sight in the suburbs with 10-inch range scopes, and is visible in smaller instruments.

Part of the problem may be that while not exactly tough to find, M106 is kinda out in the middle of nowhere, lying about halfway along a line drawn between Chara, Beta Canum Venaticorum, and Phecda, Gamma Ursae Majoris (a bowl star in the dipper asterism). Thanks to the galaxy’s relative prominence, it shouldn’t be tough to run to ground manually, however. If you need further guidance, it is 1-degree 40’ southeast of magnitude 5.25 3 Canum Venaticorum.

What will pop into your mind when you arrive on the field of M106? “Whoa! Bigger than I thought.” You may see as much as 10 – 12’ of galaxy, and it will be obvious that it’s strongly elongated. Even on poor nights you may also make out a small nucleus, albeit with some difficulty, as I did one hazy backyard evening with my C11:

M106 is surprisingly attractive despite haze. Easily visible in the TeleVue Panoptic 22mm with direct vision. Occasionally, I think I see hints of a nucleus, but not often. obviously elongated North/South.

On good nights from a darker site, a 10-inch class scope should reveal at least trace of dark details.

There are globulars and then there are globulars. Ophiuchus has plenty, but not all are like its two gems, M10 and M12. M107 is not a bad glob, mind you, just not an outstanding one. Think “M53.” It’s resolvable from the suburbs, but you will likely need 10-inches of aperture to do it, and upping the power is a must.

One good thing about M107 is that it is trivial to find, lying only 2-degrees 43’ southeast of a prominent star, magnitude 2.50 Saik, Zeta Ophiuchi. Position your scope on the star, insert a medium power eyepiece and scan slowly and carefully south-southwest. This magnitude 8.85, 13.0’ across star cluster likely ain’t gonna put your eye out, so be careful.

On the cluster’s field, my 10-inch Dobsonian, Zelda, showed this as a loose looking globular with but a few stars resolved. This was on a typical hazy summer backyard night. Under better conditions, M107 will look better, but as I noted in my long entry, “It’s a Messier, but truly not much of a Messier.”

I’ve always liked M108. It’s distinctive, and its nearness to another of my favorite objects, M97, the Owl Nebula, adds even more interest. But we are a long way from “spectacular” here. Under suburban skies, anyway. In an 8-inch telescope, M108 is a dim streak, as its stats would suggest:  magnitude 10.70 and a size of 8’42” x 2’12”. In an 8-inch in my backyard, it is often an averted vision object. It is better in the 10-inch (a 10-inch really gives you a leg up in the backyard), but not worlds better.

Like M107, M108 is at least trivial to find. If you can locate the Owl manually, all you have to do is move the telescope 48’ west-northwest roughly back in the direction of the bright dipper bowl star Merak. If you are coming from Merak, move 1-degree 30’ northeast. As with M107, but even moreso, go slowly. Higher magnification, maybe with a wide-field 12mm ocular, will help.

Don’t expect too much when you do find this bugger. You should be able to tell it is elongated, but that will likely be about it. From a better location than the backyard, things do improve in a hurry. In an 8-inch at the club dark site, I can begin to make out dark detail that makes the galaxy look somewhat like a miniature M82. In reality, this object is nothing like weirdly disturbed M82, being a more normal dusty spiral.

In a large aperture scope, or with a deep sky video camera, Ursa Major’s M109 is distinctive and interesting looking. It’s what I used to call a “tie-fighter galaxy” when I was doing the Herschel Project. It’s a barred spiral that looks a lot one of Star Wars’ bad guy spaceships if you’re seeing the bar without the full extent of the delicate and dim spiral arms that extend from it. Other people call these “theta galaxies,” but that’s other people, not me. At magnitude 10.6, M109 is not overly bright, but neither is it too large at 7’36” x 4’42”, so it is at least doable from average suburban digs.

Like M108, M109 is easy to find thanks to its proximity to Phecda, the dipper bowl star. Move 29’ south-southeast of the star and you should have M109 centered. With a 12mm wide-field, you may be able to move the star to one edge of your field and have the galaxy visible on the other edge if your scope isn’t overly long in focal length.

What you will be able to make out of M109 depends on scope and sky. With 8-inch and smaller instruments, all you are likely to see from the backyard is a dim oval thing that may require averted vision. Even with larger aperture telescopes at considerably better sites, you still may not pick up much beyond that. Well, perhaps a subdued nucleus. To see the bar and arms, I cheated, using my Mallincam deep sky video camera on the C11, which made the galaxy’s tie-fighter aspect easy from my back forty.

And, finally, at the very end of the road is one of M31’s two nearby satellite galaxies, a magnitude 8.07 E5 elliptical. While it is rather bright, it’s also fairly large (21’54” x 11’00”) and is not always trivial from the backyard. It is much more difficult than M32, and on poorer nights M110 can be surprisingly difficult—or invisible—with a 4-inch.

At least you don’t have to worry about hunting. Surely, you can find its great parent galaxy, M31, if you are beyond the greenhorn stage. M110 is located 38’ northwest of that huge beast (farther from the center than the brighter satellite, M32, that is). It is well separated from the “nebulosity” of the galaxy.

On good nights, M110 can be tantalizing, even from the backyard. In a 10-inch, I can not only see that it is quite elongated, as befits it with its E5 classification, and that it brightens towards its center, but that there are occasionally tantalizing hints of dusty detail just on the very edge of perception.

And that…is all. I hope you’ve enjoyed the series, and I also hope that, if you haven’t seriously attacked the list yet, I’ve encouraged you to do so. Folks, there is an absolute lifetime of enjoyment in these special objects.

Nota Bene:  What do I use these days when I need a planetarium program? I use Stellarium. It does everything I need to do and more. And it is free, and you know I like that. The news is that version 15.1.1 is on the streets, and the program is better than ever, now including a DSS function that allows you to superimpose DSS images over the charts (if you have an Internet  connection). There is no reason not to upgrade, folks; go get it.
Postscript:
I never did get the new Mallas/Kreimer project underway. There were a number of reasons for that. Mostly, that I'd spent more than a few nights on that road comparing what gifted observer John Mallas saw in his 4-inch Unitron to what I could see of the Messier objects in my 5-inch ETX, Sweet Charity. Yes, it would have been interesting to go after the Ms with a telescope more similar to the one Mallas used for the visual observations in The Messier Album, but it wound up feeling like I would have been retracing steps I'd taken before. And when you come to the last semester of  your life as I have you--me, anyway--begin to feel there should be a few new roads still to explore.

Comments:
"This is the End" had me worried for a bit Rod! Glad you haven't decided to give up the pen (or keyboard, more likely)