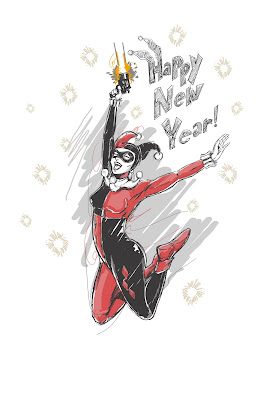 2022? I hope things will, barring an alien invasion, the zombie apocalypse, or an asteroid strike (and I don’t discount any possibilities anymore), be getting back to normal. Course, that’s what I thought 2021 would bring. It obviously wasn’t quite that, but it was Year Two of The Return of the Little Old Blog from Possum Swamp. I’d got this-here Astroblog stabilized on a mostly, if not quite, monthly schedule, and that was at least one thing that was getting back to normal, muchachos.

Anyhow, I’ve got what I think will be an exciting series of blog articles lined up for 2022. They will be observing-oriented, and will depend on the weather to some extent, but I hope “at least every month.” IOW, “steady as she goes.” This time, however? January is the annual recap of my blog-centric astronomy year. Hey, y’all, I’m just happy there’s anything to recount.

January was just what you are getting’ here today, a recap of your old Uncle Rod's past year. Which was not a bad one. The lockdown definitely encouraged me to start thinkin’ about this blog again, and slowly, ever so slowly, bringing it back online more regularly. I was pretty sure 2021 would not bring a return to normalcy, as in me going to star parties. I foresaw yet more staying at home and observing from the backyard, but I was used to that already.

I’ve been more of a backyard/club-site observer since 2016 than a star party monster. 2016 was what a dear friend (you know who you are) dubbed “Uncle Rod’s Farewell Tour.”  I did star party after star party as a speaker, seemingly spending more time in the air than on the ground. I found as my mid-sixties came over the horizon, I didn’t want to do that anymore.

Missed February but was back in March for the return of my old friend, Charity Hope Valentine, an ETX with whom Unk has shared more than a few adventures.  After she had been in her case at the New Manse untouched for several annums, Unk finally had the good sense to get her out in the backyard again. Before doing that, I had replaced Charity’s LNT battery (she’s an ETX PE), never a pleasant task, and figgered she was ready to go. Unfortunately, under the stars the little Mak had fits. Her Autostar display would disappear. Sometimes the HC buttons wouldn’t work. Occasionally, the Autostar would reset itself. Bad juju for sure. A little troubleshooting right there out back with the yard floodlights on revealed the problem. Fifteen years down the line, the Autostar’s cable was finis. The insulation was dried and cracking and in places entirely gone. One of my long-time goto astro-dealers, Agena Astro Products, supplied a new one. With it plugged in, it became clear Miss C is ready for another 15 years in her inimitable neurotic fashion and might even outlast ol’ Unk.

No April or May either, but that was pretty much due to the incredibly punk spring weather here on the borders of the Great Possum Swamp. June was not much better, but Unk was at least back with an update on doings ‘round the New Manse. Chief among those things? How much I was enjoying Phyllis Lang’s new version of her long time hit, Deep Sky Planner (8).

I’ve long been a fan of observing planners, which are essentially huge databases of objects that allow you to produce observing lists easily (and do, as they say on TBS late at night, “Much, much more!”).  In fact, the vaunted Herschel Project could not have been done in just three years without the aid of a planner, which easily showed me what I’d observed, what I still needed to observe, and when I could observe what I needed.

Much of the Project was done with SkyTools 3 (now in version 4). And it is a fantastic program. However, my more casual observing programs of today are really a better match for Deep Sky Planner (not that you can’t essay the most ambitious projects with it). Which is a way of saying the new SkyTools 4 is kinda over your silly old Uncle’s head. Things I really like about DSP? Large fonts that are easy on my aged eyes, and the fact it works with my fave planetarium program, Stellarium.

There was also some not-so-good I reported on. My Edge 800 and Advanced VX had taken a bath in the backyard thanks to a failing Telegizmos cover. Said cover was admittedly five years old, but I didn’t expect it to give up the ghost in such dramatic fashion. Both the C8 and the mount head had considerable moisture inside.

The C8 was easy enough to fix, Unk pulling the corrector plate—something he’s done a few <ahem> times to SCTs over the decades—and drying Mrs. Emma Peel off. The AVX was a bit dicier. Unk disassembled the mount head, dried the PCBs out, and hoped for the best. Indoor tests revealed the AVX was fine, but due to a stormy Gulf, testing under the stars would have to wait a while.

Unk was on schedule with an entry that recounted some good times with yet another edition of The Reminiscences of Uncle Rod. This time about the 2000 Deep South Regional Star Gaze. That was notable because it was perhaps the last good DSRSG at its old home at the wonderful Percy Quin State Park in Mississippi. Of other interest? Mention of George Kepple’s Astro Cards—index card finder charts for locating deep sky objects.  Unk purchased a deck of ‘em at the star party and has been using them frequently for two decades since. They, in fact, deserve a blog entry of their own someday. 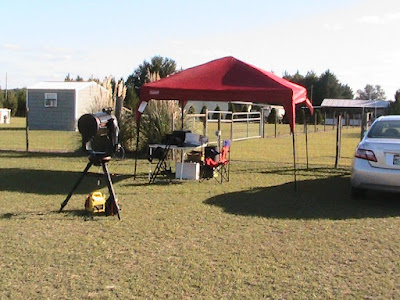 I summed it up right from the get-go: “Another hurricane, Hurricane Ida, has come into the Gulf to trouble your silly old Uncle, muchachos…Nothing has changed since July regarding the endless nights of clouds.”  So, there was no observing to be done. What was on Unk’s mind otherwise?

The Herschel Project, thanks to a couple of nights watching some old DVDs recorded during the go-go days of the Big Enchilada. As you know, I never got around to assembling the Project blog entries into a book ala’ Julie Powell’s Julie and Julia…so this article will have to do, an executive summary of the Herschel Project, Unk’s quest to observe all 2500 objects discovered by Will and Lina.

Despite Unk’s best intentions, the Astroblog was not back till November. Yet another round of health problems ensured that (this Getting Old bidness is hell). November was a rather important entry. Night-to-night, my most used telescope mount is my Celestron Advanced VX. If my old bones are weary and hurting, I can still get myself to set it up in the back 40. As above, however, the mount had been drenched in an unlooked-for storm, and I needed to give it a full checkout outside under the stars. If the mount was a goner, I’d have to replace it with a similar-sized one, and I sure didn’t want to be faced with “decisions-decisions.”

Thank goodness, the AVX was just fine. Heck, even the RTC battery was still good. I plugged in the HC, fired the mount up with my 5-inch APO, Hermione, onboard, and had quite the time eyeballing the late summer to early winter showpieces. What would I have replaced the mount with had she been kaput? That would have been the big question. Another AVX? An iOptron? Something higher-toned? Thinking about that makes my head hurt, so I sure am glad I don’t have to think about it. 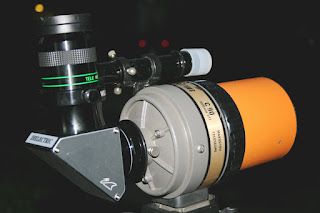 December is always my Christmas Eve message, which is usually shorter and more sentimental than other articles. Anyhoo…with the thermometer in the mid-70s, December 24th in the ‘Swamp didn’t exactly have a Christmas feel about it. Despite that, Unk was looking forward to one of his yearly astronomy rituals, my Christmas Eve look at M42.

How did I do that this year? For a while, it looked like the answer would be “not at all.” Clouds were everywhere. By mid-evening, however, they cleared somewhat, and Unk took a look with another MCT that hasn’t got much use in many a weary year, my little Orange Tube C90. The denouement was M42 looked wonderful it the small (but high contrast) view of the 90, and that, along with a bottle of a certain potation, put your old Uncle in a rather jolly holiday mood.

So, that was the year that was, muchachos. This year? As above, a fun observing project is in the offing. What’s it about? I will give you a hint:  It concerns one of Unk’s books. See y’all soon where all shall be revealed!

Comments:
Hope 2022 is a good year for you! Enjoyed reading this edition!!!

Great read Rod. Miss seeing you and Dorothy at the star parties